Pros and Cons of Social Networks

I bet that if I go onto Facebook or Twitter right now, I could find almost every one of you on there. When someone says “social network,” the first site to come to your mind is Facebook, right? Facebook is now the most identifiable social network, and according to Facebook statistics it’s recently reached over 300 million active users. Combined worldwide, they all spend over six billion minutes online every day. I got most of my information about social networking from facts on file.

Turn in your highest-quality paper
Get a qualified writer to help you with
“ Pros and Cons of Social Networks ”
Get high-quality paper
NEW! AI matching with writer

The earlier social networks, such as Friendster. com and myspace. com, started in the early 2000’s, and since then they’ve become very popular and even more sites have emerged. There are many effects and uses for social networks, and many people have different opinions on them so today I’m going to share those with you.

Let’s see what supporters admire about social networks. Supporters say that social media and networking sites have changed the way that we communicate for the better.

They say that with all the different possibilities it’s much easier to keep in touch with family, friends, and colleagues. If someone was tired of emailing or simply chatting, they could use Skype, which is a software application that allows users to make voice or video calls over the Internet. Social networks can also provide a way for people to express themselves, through forums, Internet messaging boards, or by creating their own blogs that others can comment and post on too.

Through social networks people can also make friends more easily by connecting with others who have similar interests.

It’s become a daily habit for us to sign into our favorite social networks, so that whenever we get the chance to do so, it seems to relax us. A large and important impact of social networks, however, is its ability to raise awareness and keep everyone throughout the world informed. Reading about current events isn’t limited to the newspapers anymore, now news sites and social networks are constantly updating us with the latest information. We can learn about natural disasters that strike all over the world and learn what we can do here to help.

If any of you are on Facebook, I’m sure you’ve seen popular pages posting pictures of someone’s sad life story, some asking for prayers and others asking for recognition for one’s actions or heartbreaking life. As you all know, when MaKayla passed away, her friends and family worked endlessly to gain the attention of her hero, LeBron James. Through Facebook and Twitter her memorial page has received almost 8,000 likes and grabbed the attention of Packers player, Clay Matthews. He helped to raise awareness by asking people to tweet to LeBron to obtain any sort of recognition from her hero.

With everyone’s help from social networks in the end, that goal was accomplished. Seeming to be on the more old-fashioned side, government officials are even getting into the networking hype. They’re using them to help get ahead in the polls, connect with voters and find out their opinions as a mass. In 2011, President Barack Obama tweeted the following message, as seen on the smartboard. Included in this tweet was a short video with tributes from his 2008 supporters. Today, he still tweets asking for the public’s opinions on controversies and issues.

These points make you think that social networks are all good; however, people who oppose them have quite different opinions. Opponents argue that social media and networking sites are ruining how we communicate and that it can only get worse as time goes on. The rise of social networks has also coincided with an erosion of the quality of conversation. MIT psychology professor Sherry Turkle says, “As we ramp up the volume and velocity of online connections, we start to expect faster answers. To get these, we ask one another simpler questions; we dumb down our communications, even on the most important matters.

Comedian and commentator Dean Obeidallah writes for CNN saying that social media is turning Americans into “the laziest generation” yet. Companies and businesses are using social networks to advertise and promote themselves, so if you’re applying for a job with a company or business, they could check your own profile to see what you’ve been posting. If someone were to be tagged in some inappropriate pictures, companies might see them and it could ultimately cost you the job. Social networks can also be very dangerous. Con artists have been known to create scams via emails, and now they’re trying to take your money using social networks.

Because social networks let you create your own profile, some people decide to put in fake information and photos. So you never really know if the person you’re talking to is real or not. Bullying now isn’t restricted to throwing hits and talking smack face-to-face. Networking sites have unfortunately made it much easier to tease others, and now cyber-bullying and harassment has become a major problem. An article from the periodical Educational Leadership has said that cyber-bullying is focused on students and teenagers, and that it can cause severe mental, emotional, and sometimes even physical pain.

An anonymous 17 year old from New Jersey said, “When I was being cyberbullied I felt like I wanted to never go out of the house or talk to anyone ever again. It led me to depression, and the person who was bullying me …believed that it was funny. ” Now that I’ve gone over all of my points, let’s review the pros and cons of social networks. Along with helping us make new friends, they can help us keep in touch and communicate with our family and friends. They are also very useful in connecting officials to the public and helping us learn about how we can help make a difference in charities or fundraising events.

However, with the convenience of online chatting, real face-to-face conversations are eroding. With the anonymity of peoples’ identities, it can be dangerous to talk to strangers. As we’ve seen, there are both positive and negative effects of social networks on us, but depending on how we use them is how we allow them to impact our lives. With all of the advancements in technology, social networks will become more prominent in everyday lives. It’s still likely, in one form or another, that social networks will continue to grow and evolve.

Pros and Cons of Social Networks. (2016, Sep 10). Retrieved from https://studymoose.com/pros-and-cons-of-social-networks-essay 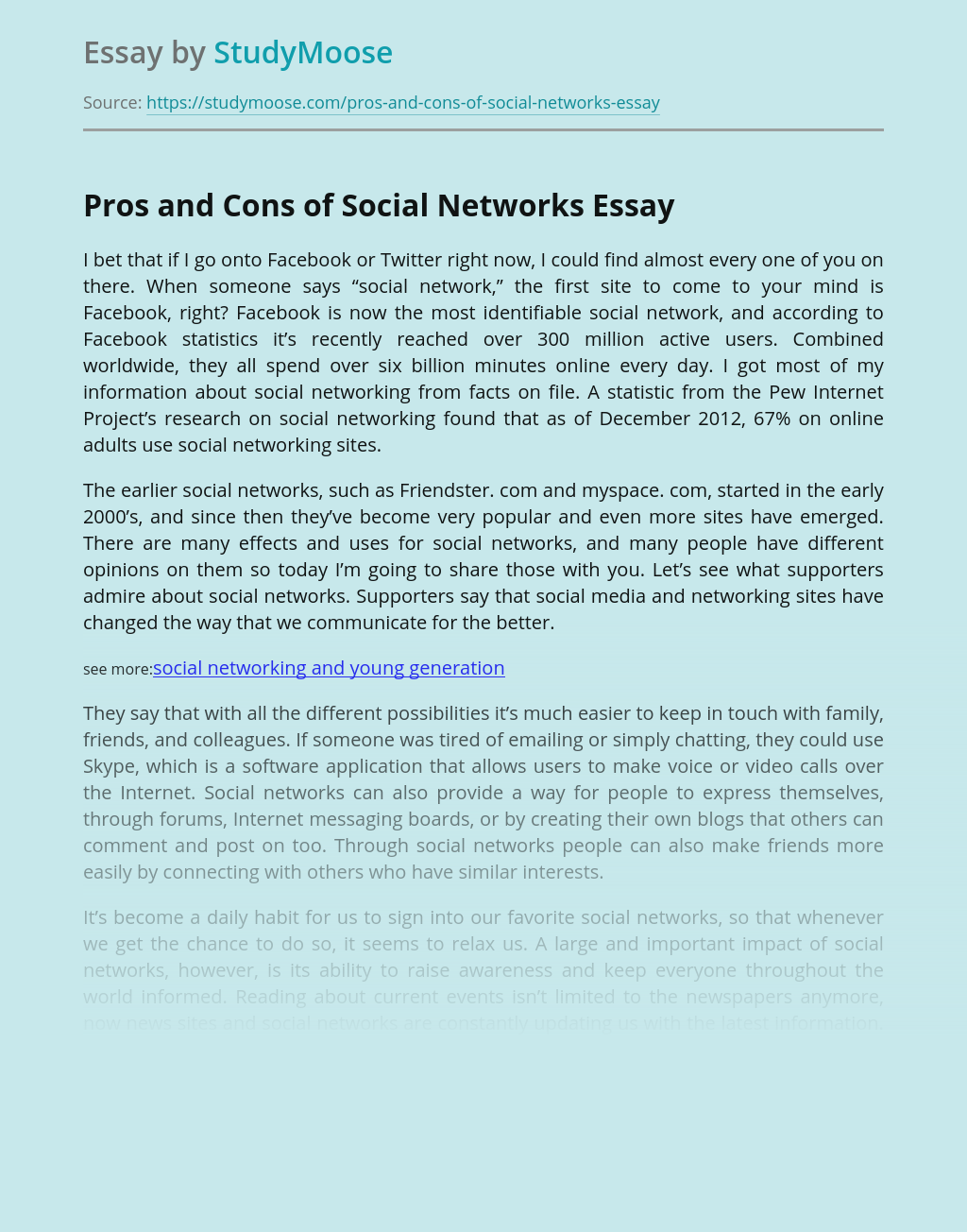 Turn in your highest-quality paper
Get a qualified writer to help you with
“ Pros and Cons of Social Networks ”
Get high-quality paper
Helping students since 2015
Stay Safe, Stay Original