Why hunting should Be banned?

Hunting was once considered a test of courage and manhood. Now it is a fight between a predator and a prey, it is just the killing of defenseless animals. This “sport” that people call hunting is a dangerous thing and it can cause animals’ serious pain. Getting rid of this “sport” will benefit ourselves as we will keep the balance in nature. Traps are one of the main tools used by hunters to capture animals in the wild that are too evasive.

Don't use plagiarized sources. Get your custom essay on
“ Why hunting should Be banned? ”
Get custom paper
NEW! smart matching with writer

There are many types of traps that hunter use but a common trap is the leg hold trap.

This trap holds that animal there while the hunter comes in and kills it. The hunters say it’s a painless device but I differ in opinion the trap is a claw which has a tremendous amount of power to puncture flesh and even break bone. Sometimes animals even chew off their own leg to escape. The “instant kill” trap that hunters say is a “humane” way to kill an animal, causing a painless death instead of a painful one.

Most of the time the trap actually gets the vital point and kills the target but sometimes it can miss and leave the animal there to die a slow… painful… death.

The worst hunting that is practiced is by the richer people, the fact that they can buy exotic or even endangered animals from zoos and wildlife parks. It is very unjust to the animal because it has lost its power to survive after being injured or drugged and is placed as an easy kill.

I wouldn’t even call this hunting it’s just massacre of animals. Even though hunting should not be a sport, hunting helps maintain a healthy herd and promotes land, wildlife conservation. Because without hunting herds will over populate and become sick from starvation or spread disease.

Hunters are a major supporter and play a big part in wildlife management. For instance the deer’s are over populated and they are running down into cars and streets in suburban landscapes this can be controlled with hunting? I have to disagree with this because reports have said that most of the deer’s are coming down during hunting season which means that the hunters are the ones that are scaring them down there. Hunting should be stopped before it gets too out of hand as it can lead to animal species to be endangered or even extinct.

Why hunting should Be banned?. (2017, May 19). Retrieved from http://studymoose.com/why-hunting-should-be-banned-essay 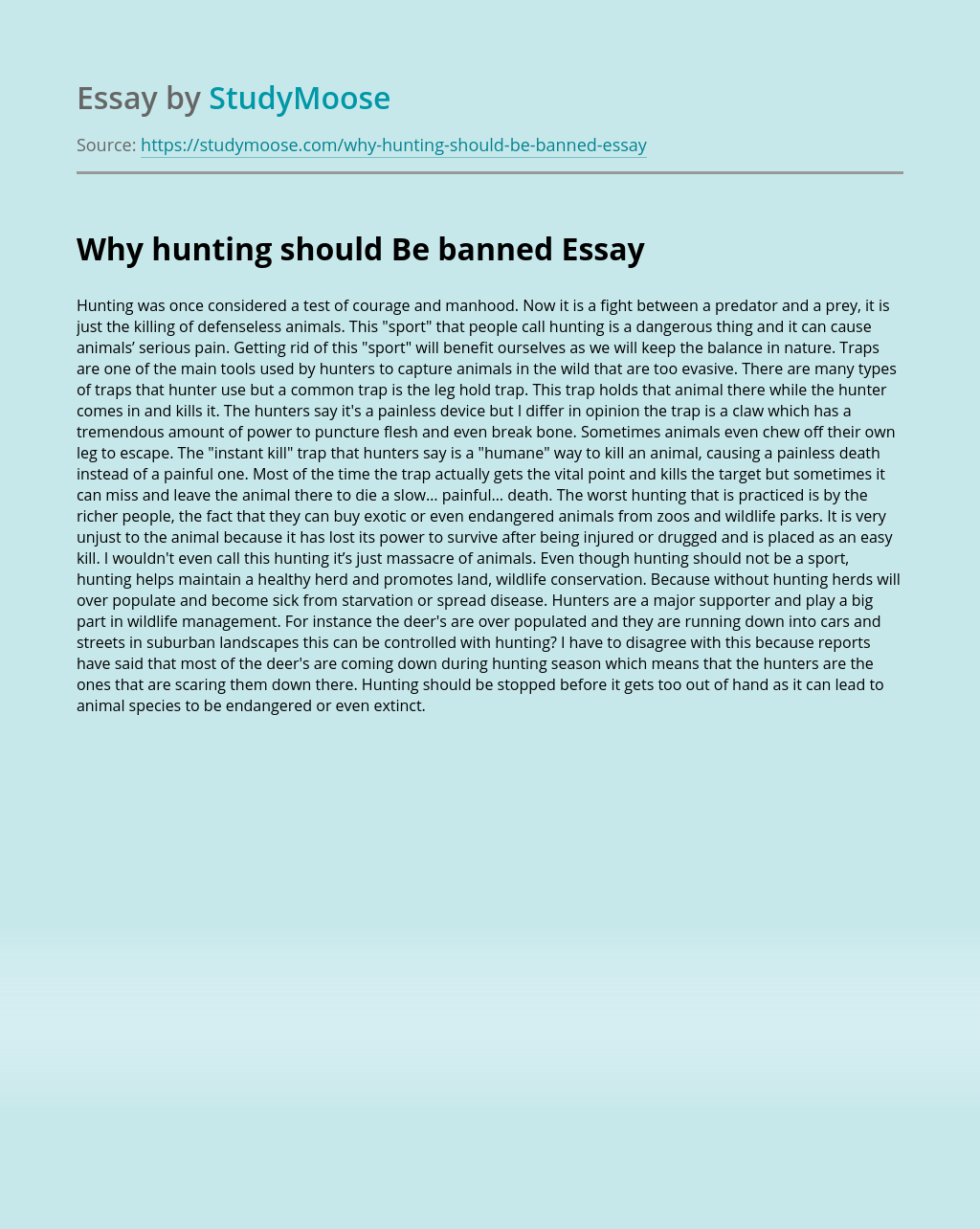