Did the government go too far

Over time, technology has impacted the police and other law enforcement agencies with new devices for gathering evidence. These new tools have caused constitutional questions to surface. One particular case in Oregon of an individual (DLK) aroused such question. DLK was suspected of growing marijuana inside of his home. Agents used a thermal imager to scan DLK’s residence form the outside. The results indicated heat, just like the kind that is generated by special lights used for growing marijuana indoors.

Don't use plagiarized sources. Get your custom essay on
“ Did the government go too far ”
Get custom paper
NEW! smart matching with writer

Constructed by the scan, a judge issued a search warrant. A warrant – a legal paper authorizing a search – cannot be issued unless there is a cause, and a probable cause must be sworn to by the police officer or prosecutor and approved by a judge.

A warrant must describe what is being searched and what will be seized. 100 marijuana plants were found finalizing the arrest of DLK; however, did the scan violate DLK’s Fourth Amendment rights? The Fourth Amendment states, “The right of people to be secure in their persons, houses, papers, and effects, against unreasonable searches and seizures, shall not be violated, and no Warrants shall be issue, but upon probable cause, supported by Oath or affirmation, and particularly describing the place to be searched, and the persons or things to be seized” (Constitution).

This amendment touches on the expectation of privacy in your home and person. The government is not unable to search you, your home, your belongings, or take your belongings, also known as a seizure, without a good reason.

A person’s Fourth Amendment rights may at times seem to delay the world of law enforcement. If the police feel that they have

Cornacchia 2
Powerful evidence of a crime that is occurring it seems obvious that they would want to act on that evidence without having to take the time to get a warrant. Courts have ruled that a warrant is not required in every case. Sometimes, the needs of law enforcement to be effective override privacy concerns, but why have privacy rights if they will not be active? I do believe that the government went too far. “… [The] Fourth Amendment protects people, not places. What a person knowingly exposes to the public, even in his own home or office, is not a subject of Fourth Amendment protection” (Stewart). Document A shows a 1967 case, Katz v. United States, where federal agents placed a bug on the outside of a public phone booth that Katz had been using. A bug is a device that allows them to listen in on conversations.

It accumulated evidence that led to Katz being convicted to gambling charges. Katz appealed, arguing that the recordings could not be used because they were acquired without a warrant. The court ruled that agents did in fact violate his Fourth Amendment rights, even though they never actually entered Katz’s phone booth. A persons Fourth Amendment rights could still be worked against even when the police are not physically searching a place. In relation to the DLK case, the scan was able to be done without the actual need of being in the home; however, “But what he seeks to [keep] as private, even in an area accessible to the public, may be constitutionally protected” (Stewart). Without the use of the thermal imager, the public would have been able to catch this with the naked eye. This was an invasion of privacy. DLK did not intend for this to be seen; therefore, the government did go too far.

Cornacchia 3
Thermal imaging cameras convert infrared energy into a visual display, as shown in Document C. The image is a house seen through a thermal scanner. The greatest amounts of heat, which is represented with the color white, generally escape through the windows, doors, and some parts of the walls and roof. These areas of the house usually lack insulation which helps supports DLK’s accidental release of evidence. If he was aware that his privacy was going to be violated by this high tech technology, I’m sure we can suggest that he would have acted upon that problem. This document illustrates just how invasive technology can be; therefore, the government did go too far. Your home is where you should have the most sense of protection and where your privacy should be most respected.

In fact, it is supposed to have the most degree of protection of the Fourth Amendment. Document D helps emphasize the unknowingness of the exposure of DLK’s conduct to the public. The advances in technology have far surpassed what can be noticeable without the use of them. “When technology can exceed the natural senses, it subverts the human ability to contain private matters in a normal way and threatens the core expectation of privacy in the home” (Document D). Although the imager was able to be used from the outside of the house, it still violated the privacy of what was on the inside. Document F states, “[In this case,] the Government uses a device that is not in general public use, to explore details of the home that would previously have been unknowable without [going in], the surveillance is a search and is… unreasonable without a warrant” (Scalia).Thermal imagers cross the line of protection of the home and should be used only when authorized by a warrant; therefore, the government did go too far.

Cornacchia 4
Now that new technology is changing the work force, we must consider things that we never have had to before. Although it offers many new advantages, it also places stress and questions on our Country’s Fourth Amendment. When the government uses a method that would help provide information on a case that, in the past, could have been only upheld by entering the home of someone, then the method violates a person’s rights and a warrant must be required.

Did the government go too far. (2016, Mar 12). Retrieved from http://studymoose.com/did-the-government-go-too-far-essay 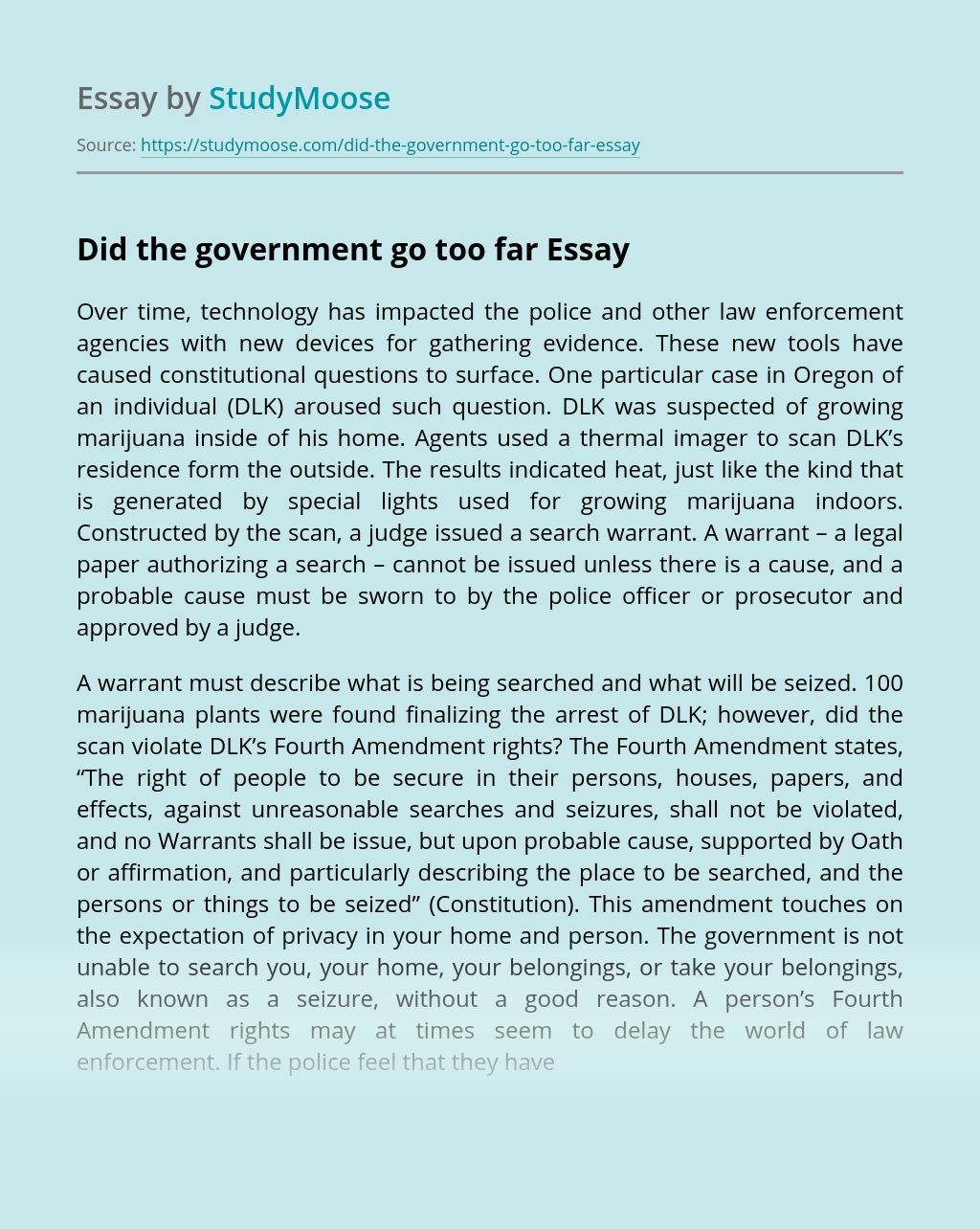