Prohibition’s successes outweighed its failures in the years 1920–1933

The prohibition era was the period in the US when the manufacture, sale and transportation of liquor were banned. To completely eliminate alcohol from society was always going to be an impossible task due to the limited amounts of prohibition officers and the easy manner in which illegal alcohol could be made and old, so in that aspect of its ambition it failed. However it was able to reduce alcoholism, and as a result of prohibition fewer arrests for drunkenness were recorded.

Don't use plagiarized sources. Get your custom essay on
“ Prohibition’s successes outweighed its failures in the years 1920–1933 ”
Get custom paper
NEW! smart matching with writer

With those thoughts in mind, it is important to remember that whist some positives came from Prohibition, the negatives that came from the policy were far greater and more significant, so therefore it becomes nigh on impossible to call it a success. The Prohibition policy enforced by the USA, did not have the kind of success that the government had originally hoped for, however it was able to achieve some of its ambitions on a smaller scale.

It is important to remember that the diversity of American society is reflected in the impact of Prohibition; rural areas often supported the ban on alcohol that was imposed by the 18th amendment and the Volstead act, and as a result these areas saw a marked decline in consumption.

Such communities got used to a life with less alcohol, and even after Prohibition ended in 1933, consumption rates remained low, and only 50% of the original bars re-opened. Whilst other areas in the US did not see the same sought of effect, alcohol consumption rates did still decrease and there were less cases of alcohol abuse around the country with the average American making the shift from hard liquor to Beer and wine.

These changes coincided, with significant drops in figures for road traffic accidents as well as arrests for drunkenness.

The fact that prohibition was able to achieve a reduction in alcohol consumption rates was seen as a huge positive, as one of the main reasons prohibition was enforced in the first place, was to prevent alcohol hindering ones professional and family life. Many figures show us that after Prohibition was enforced, there were far less cases of drunkenness at work and as a result more efficiency at the work the place, and on average, husbands were spending more of their leisure time with their families as opposed to spending it at local saloons, so less of the family wage was being spent/wasted alcohol. The government and federal enforcement also experienced moderate success in the attempt to uphold the laws of prohibition, with agents such as Izzy Einstein and Moe Smith making over 4000 arrests and seizing over 15m dollars’ worth of illegal liquor. With the only access to alcohol being through gangster organisations and speakeasies, many people turned to soft drinks as a new social drink. Consequently this lead to a boom in the soft drink industry with companies

In an alternative aspect, there were several reasons as to why the success of Prohibition was limited. Firstly, there were huge logistical problems to the policy, with America having 18,700 miles of coastline and land border. This meant that bootlegging became a big issue with 215m dollars’ worth of alcohol being transported across the land border between Detroit and Canada, and thus ultimately the supply of alcohol coming into the country was never restricted and so the American public still had access to a plentiful supply of alcohol. The fact that before prohibition Washington DC had 300 bars, but by the mid-1920s it had over 700 speakeasies, substantiates the point that alcohol supply actually increased during prohibition. The same trend can be seen in other states such as Massachusetts, where the 8000 speakeasies in the 1920s outweigh the 1000 licensed saloons before prohibition.

The fact that there was a significant lack of enforcement agents with just 3000 officers expected to cover the entire country, meant that the illegal supply of alcohol would remain rife with very limited interference. These agents were also only paid 2500 dollars, whereas bootleggers, moonshiners, gangsters, speakeasy owners often paid them double to look the other way. This ultimately meant that Prohibition had basically surrendered the supply of alcohol to criminals and in particular, gangsters. The new law also acted as a great stimulus for the illegal manufacture of alcohol (‘moonshine’). Many of these drinks were of poor quality and had some dangerous side effects, such as blindness, internal bleeding and even death with over 30 reported deaths in New York in 1924 because of illegally manufactured alcohol. Due to the demand being so high, prices of alcohol beverages increased, and thus gangsters garnered interest as they appreciated the amount of money that could be made.

Gangsters and Al Capone began to establish monopolies in the manufacture and sale of alcohol. Not only could gangsters control alcohol supply, but they also gained political influence, for example, the Mayor of Chicago, Bill Thompson received heavy bribery and intimidation from gangsters, and thus he allowed gangsters to function as normal without interference in his city. Naturally as consumption increased, arrests for drunkenness and drunk driving also increased by 41% and 81 % respectively. Al Capone was undoubtedly the one who benefitted the most from the gangster up rise in the 20s, and by the time he went to jail in 1932, it was estimated that he had a net worth of around 70m dollars. Gangsterism also brought a violent atmosphere to America, with many gangs getting into violent brawls over territorial disputes. Capone in particular was prone to violence, with his group of gangsters being responsible for 300 deaths in Chicago.

On 14th February 1929, 5 of his men arrested opposition gangsters and shot 100 bullets into them, the incident became known as the St Valentine’s Day massacre. Furthermore, the homicide rate increased to 10 per 100,000 population during the 1920s, a 78 percent increase compared to the pre-Prohibition period. The illegal nature surrounding the purchase of alcohol, tended to provide the population with a larger sense of excitement, and what the new law inadvertently ended up doing, was encouraging and tempting people to disrespect the law. The fact that the number of crimes increased by 24 percent between 1920 and 1921, and The Sing Sing prison was forced to deport sixty prisoners to Auburn in May 1922 because of overcrowding, illustrates the amount of people that were breaking the law during the Prohibition era.

Overall, it becomes accurate to state that whilst Prohibition had good intentions, and was able to decrease the average alcohol intake, the new law was never feasible. Allocating just 3000 officers to monitor the entire countries alcohol supply, as well as its 18,700 mile border, meant that an enormous amount of alcohol entered the country under the government’s nose. The evolution of Gangsterism and violence in America further denotes the degree of failure that Prohibition is associated with, and in that statement lies the lack of success Prohibition achieved.

Prohibition’s successes outweighed its failures in the years 1920–1933. (2021, Mar 24). Retrieved from http://studymoose.com/prohibitions-successes-outweighed-its-failures-in-the-years-1920-1933-essay 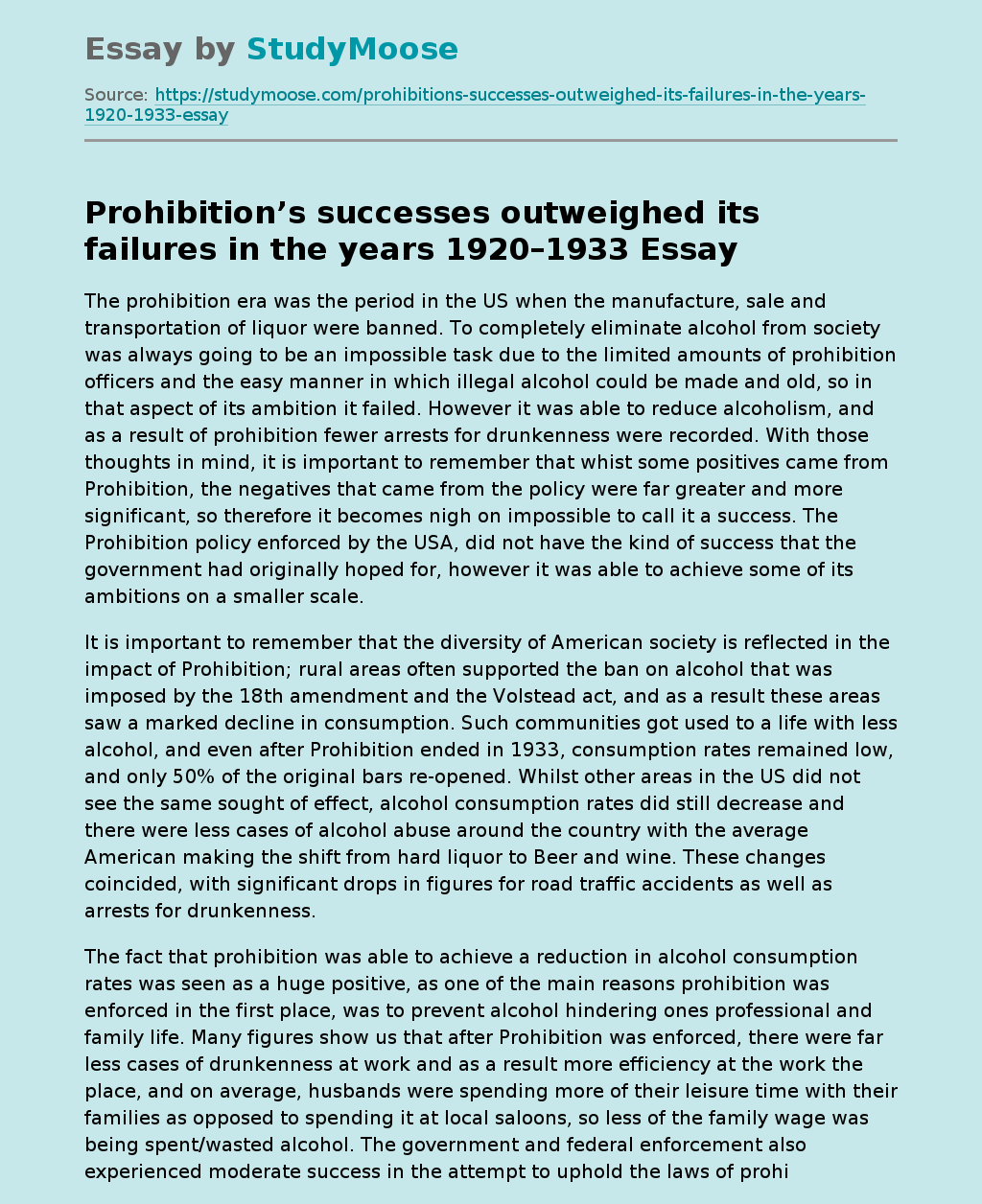