Success and Failure of Progressive Presidents

At the start of the 19th century, a new era had begun that would forever change the course of American history. This new era was known as the Progressive era; an era of change amongst the common worker and the powerful giants of industry. Two major leaders that occupied this specific moment in time were Theodore Roosevelt and Woodrow Wilson. However, these prominent men had contributed much to the efforts of the progressive movement; each one had different personal views that dictated their approach.

Don't use plagiarized sources. Get your custom essay on
“ Success and Failure of Progressive Presidents ”
Get custom paper
NEW! smart matching with writer

This paper attempts to compare and contrast these men’s progressive ideas apart from their actions. We will start with Woodrow Wilson, in his inaugural speech, he had addressed changes in the government to show favor towards the popular Party (Wilson, 1913).

Wilson explains, by asserting that the nation desires the Party to interpret and change the nation’s designs and views. He claims that now the government and the nation’s job are to cleanse and correct the carelessness and ills conveyed about by the country’s industrialization (Wilson, 1913).

Wilson also touches on the matters that need settlement, which extends from the need to adjust the foreign tariff, the banking strategy, the industrial scheme, and the agricultural strategy. He also discusses how the government desires to protect its people’s lives with sanitary regulations, untainted food regulations, and work regulations. He stresses that there will be repairs in the financial strategy, and that “Justice, and only fairness, shall always be our motto” (Wilson, 1913). With Theodore Roosevelt’s Progressive platform, he called for the direct election of United States senators, woman suffrage, reduction of the tariff, and many social reforms.

Roosevelt, who served as the 26th president of the United States from the years of 1901 to 1909, he commenced on an energetic campaign as the party’s presidential candidate. A key point of his platform was the “Square Deal.” This was Roosevelt’s concept of a society based on fair business competition and increased welfare for needy Americans (Bowles, 2011). Despite Wilson’s measured successes in labor, child labor, banking, business, and farming reforms during 1914 and 1915, his New Freedom was a disappointment amongst woman and African Americans. In 1916, Wilson began pushing for a multitude of reforms that were in part motivated by the upcoming election. The reforms included the Federal Farm Loan Act, the Adamson Act, the Keating-Owen child labor law, and support for women’s suffrage. After, 1916, Wilson accepted much of Roosevelt’s New Nationalism, supporting greater federal power and regulation. However, as America soon began sending military to intervene in the war in Europe, this action ended his reform ambitions (Roosevelt, 1911).

Roosevelt had his successes and failures as well. Roosevelt brought about change in the meat packing industry with the Meat Inspection Act and Pure Food and Drug Act, which is due to the work of Upton Sinclair (Roosevelt, 1911). However, like Wilson, he would fail to achieve any changes for women and African Americans. This occurred because of growing criticism and his belief in African American inferiority. As for women, he did not bring about their right to vote. It would not be until the ratification of the 19th amendment during Woodrow Wilson’s presidency that the suffrage movement reached its goal (Roosevelt, 1911). When Roosevelt’s time in office ended, he felt his chosen predecessor, Taft, would lead the country and carry on the progressive movement. Throughout his years as president, Roosevelt increasingly disapproved of his methods, and choices. One of those choices that angered him was when Taft transferred over 1 million acres to private industry. All this came to a head when Roosevelt sought to gain the Republican nomination to run for president in the 1912 election, supersedes Taft.

However, Roosevelt lost the nomination, and decided to run for president anyway by forming his own party, the Bull Moose Party. Even though Wilson became the president, he stole enough votes to make sure Taft had no change in winning (Bowles, 2011). For years to come the work, Roosevelt and Wilson in the Progressive era helped to improve American life, business and make it safe and a competitive market. These two presidents met the problems head on created by industrialization and urbanization that the government had not yet addressed. Each of them brought a slightly different approach to the concept of trusts, big business, and improving the life of the everyday person, although, they were successful in establishing new precedents in the way which the federal government would regulate these new reforms.

Success and Failure of Progressive Presidents. (2016, Mar 24). Retrieved from https://studymoose.com/progressive-presidents-their-successes-and-failures-essay 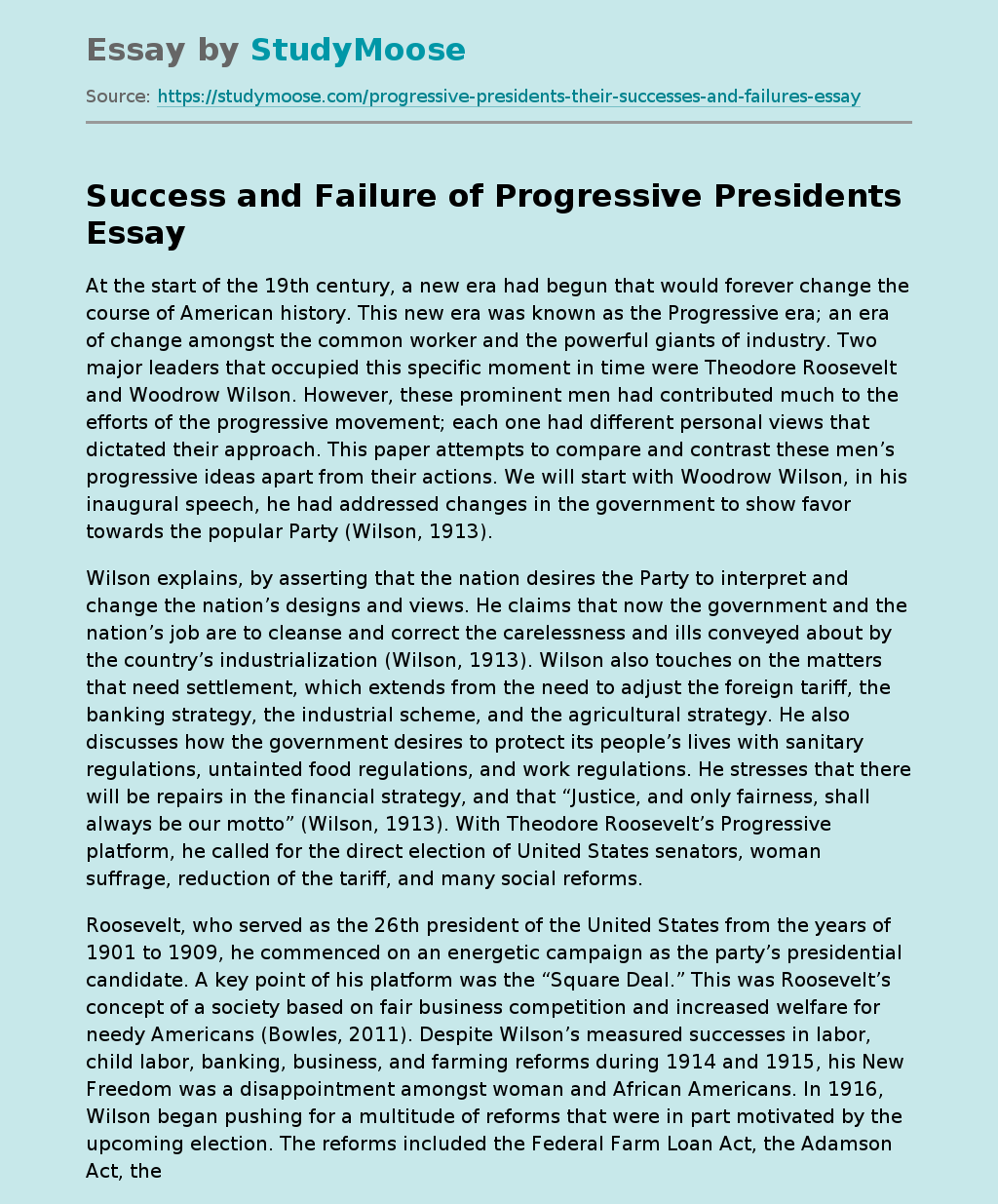