The role of professional athletes as role models for the youth is a debatable topic. Should they be the people your children look up to and try to be like? Or are they just popular people who have let fame get to their head and influence them to make poor choices? While there are many people who believe that they should be responsible for setting good examples for the millions of children in the world, there are equally as many that believe they should not be put under that kind of pressure on top of their playing commitments.

Don't use plagiarized sources. Get your custom essay on
“ Professional Athletes as Role Models ”
Get custom paper
NEW! smart matching with writer

The media is a big influence on the opinion of people. It leads them to believe all professional athletes are bad people because of poor choices they get caught making, or it can show them that these athletes are determined, hard-working, and successful people. Children of this generation are very technologically advanced. More often then not young children have smart phones, iPads, laptops, and other ways to access the internet at all times.

It is so easy for them to come across articles, pictures, tweets, etc about their favourite athlete. Because of social media sites like twitter, children can see what their role models are doing at all times. During the 2012 Olympics starting goaltender for the US Woman’s National Team, sent out a risky tweet about former US striker Brandi Chastain and the way she commentates. Many people were against this tweet and believed her to be too opinionated and rude. Other people believed that the tweet was the only way to confront Chastain.

They thought it was acceptable because it showed Solo wasn’t going to just sit back and watch Chastain make negative comments about her teammates. This is only one example of a professional athlete getting attention from the media in a negative way. The particular incident caused Solo to lose the respect of many of her younger fans because they did not fully understand the problem at hand. Although it is unfair that professional athletes earn their reputation from the things people learn from the media, they should be aware of their actions while they are in front of cameras.

If the youth are copying the way Kobe Bryant shoots a basketball, or how Alex Morgan wears her pre-wrap, why wouldn’t they think it is okay to use the same performance-enhancing drugs as their role model does? It works for them doesn’t it? Often some of the smallest action that an athlete makes can change the entire outlook of a young child. If a ten year old boy who loves to play hockey sees Tie Domi fighting another player on the ice, he gets the impression that it is okay to do.

The next time he goes out onto the ice he drops his stick and gloves and fights one of his opponents until they can no longer stand. The young player will now have to face the consequences of his actions, but he doesn’t understand why he is getting so severely punished but his role model, Tie Domi is allowed to do it (although he is not legally allowed to, the child does not always know that. ) Every child athlete wants to be exactly the same way that their role model is. This is the same for professional athletes when they were younger.

Every athlete has their own role model that they looked up to when they were younger, many will willingly admit this. The years they spent watching there favourite athlete and trying to be like them, is the main reason every professional athlete should take it upon themselves so be a good role model for the young athletes below them. They became the person they are today by following the good examples set by professional athletes before them. So why should they believe it is okay for them to act inappropriately? 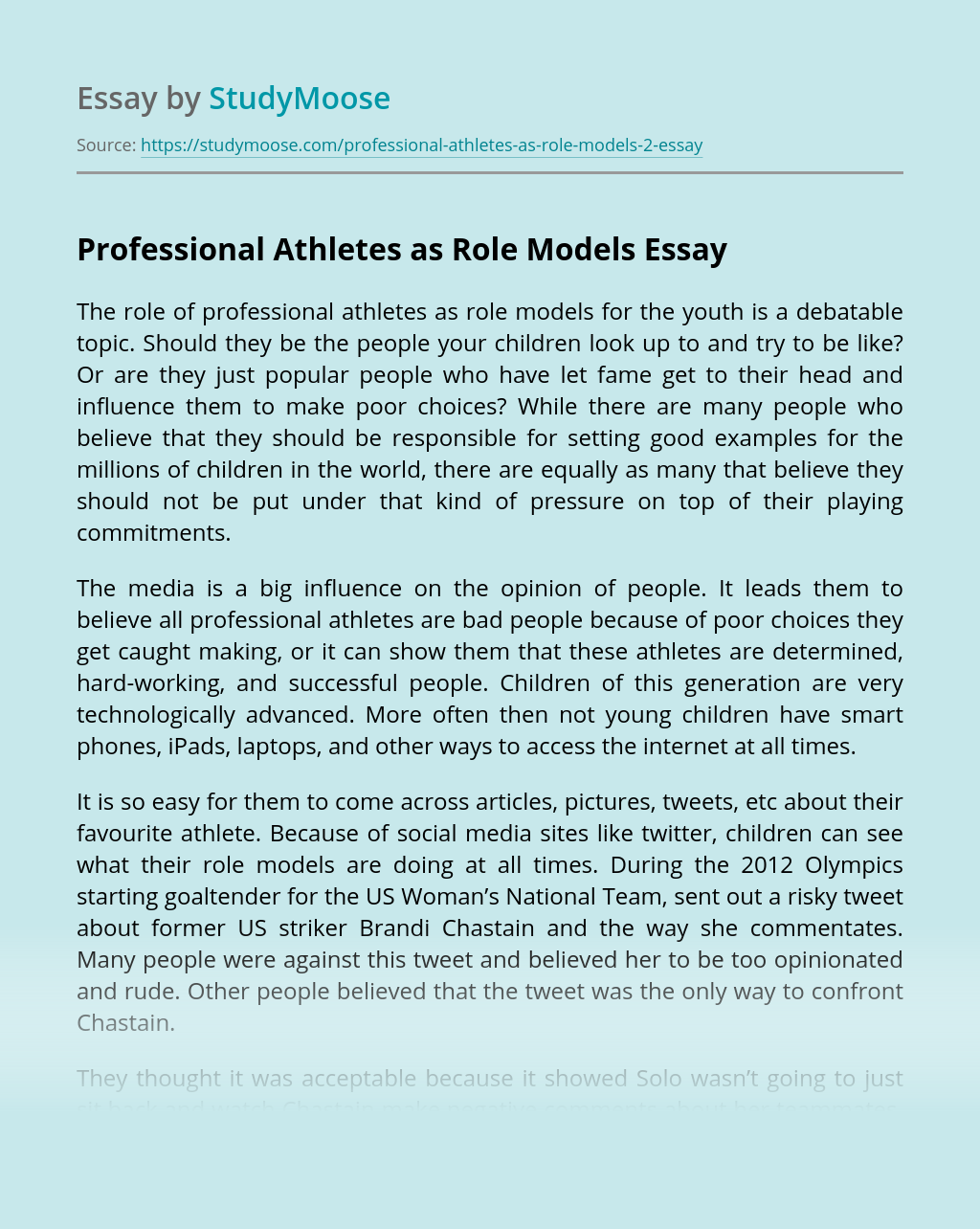