Professional athletes, specifically in the NFL, NBA, and MLB, often are rewarded extremely substantial contracts and lucrative endorsement deals and it has been argued that their salaries should be reduced to smaller wages but they are paid in the way that they are for good reason; they provide the world with constant entertainment, work hard at their jobs and are only able to work for a small amount of time. In 2011, both the NFL and the NBA locked out its players from team facilities and also completely shut down league operations because of disagreements on player salaries and reductions.

Don't use plagiarized sources. Get your custom essay on
“ Are Professional Athletes Overpaid? ”
Get custom paper
NEW! smart matching with writer

Previously, the owners and players had a collective bargaining agreement, and until a new one was reached, the fans of each of these sports could not enjoy watching their teams play.

In these particular arguments, the players were correct in that they do not deserve to have their contracts reduced. Athletes provide constant entertainment to the masses and everyone is interested in what they do. Each year, the television ratings for big games and contests such as the Super Bowl, the World Series or the NBA finals increase. The population is generally interested in the affairs of professional athletes and this is what makes them celebrities.

The American society would not be the same without the likes of LeBron James, Kobe Bryant, Peyton Manning, or Tom Brady. The United States is automatically associated with these names because national sports are an essential part of our culture.

Therefore, it makes sense for the faces of these athletes to be seen on store windows and in cell phone advertisements for the sake of endorsement deals. Having a customer see LeBron James’ face on a Nike shopping bag or in a Samsung commercial is a great way to get the customer to buy the product because they associate it with James, a world-renowned basketball star. Giving large endorsement deals to big-name athletes helps support the economy because fans emulate the players they cheer for. Due to the physical toll of their professions, athletes are only able to enjoy limited time playing their sports.

Usually, they are drafted right out of college around the age of 22 and only the good ones are able to stay around long enough into their mid-late thirties. While some are able to maintain jobs as analysts or sideline reporters, others don’t have their future professions set in stone. For example, an NFL quarterback may retire at the age of 35 with a completely broken down body after sustaining all the hits during his career. At that point, he may no longer be able to get a job anywhere else, especially not in any other sport. Having a large contract that can cover several years for them would allow them to enjoy an easy retirement just like everyone else once they are finished with their work. Not only are athletes a staple in American culture, but they have worked harder than anyone else in the world to get to where they are today. Professional sports teams are solely comprised of the absolute best of the best and to become that, the amount of time and dedication needed seems impossible. There are about 900 teams in college basketball and about 13 players per team.

That multiplies to nearly 12,000 players across the country each year. The NBA has 30 teams and each team is only allowed 12 players. That multiplies to 360 NBA players each year, about 3% of the total number of college players. If college basketball is already hard enough to get into; the NBA is for the truly elite. Athletes as physically gifted as many are is also very rare. In order to be in the NBA, one needs to be above-average in height. In the NBA, anyone below 6’6 or 6’7 would look short in comparison to anyone else. The average height of a 22 year old male, which is the age of an NBA player straight out of college, is about 5’9 or 5’10, so 6’6 is extremely tall. Being this tall could result in a person being uncoordinated and clumsy. Clearly, NBA players are the exact opposite and that makes them even more impressive as athletes. Watching someone as gifted as a hulking beast like 6’8, 260 lb LeBron James play truly is a rarity and the whole world would want to see him showcase his talents. Athletes are put under extreme pressure in each of their sports. The entire world expects them to come through in clutch moments and if they do not, they receive heavy criticism.

The best athletes, especially, must have to experience unbelievable stress due to the expectations in intense moments when the games heat up. Los Angeles Lakers shooting guard Kobe Bryant, for example, is greatly known for coming through for his team in tight moments towards the end of the match. In his 18 year career, he has earned a name for himself and is now known across the world. Currently, he earns over $30,000,000 per year but it is uncommon to see anyone complaining that Kobe Bryant’s contract is too large. It is often argued that athletes should not be rewarded enormous income wages because they waste the money on their lavish lifestyles and idiotic ventures. However, athletes often donate their money and open charity benefits to help the unfortunate. For example, New Orleans Saints quarterback Drew Brees’ The Brees Dream Foundation, started in 2007, is dedicated to helping the children of New Orleans and the cities’ educational facilities following Hurricane Katrina.

Another example is New York Yankees shortstop Derek Jeter, who founded the TURN 2 foundation in 1996. The TURN 2 foundation is an effort to turn kids and teens away from drugs and alcohol in order to sustain healthy, active lifestyles. If these athletes are to receive million dollar salaries, then we should expect them to give some of that money back to people who need it and plenty of athletes do so. Professional athletes are celebrities, one-percenters, and even divas. They enjoy luxuries that average, working class individuals do not get to enjoy. Some argue that they waste their money on said luxuries, but this is not the case. The few immature players who are unwise with their spending money make up a small percentage of all the professional athletes in major sports. Mature, hard-working athletes try their absolute best and push themselves physically harder than anyone else in the world and for this reason; they are great role models for children. As long as they put their money to good use, continue to provide constant entertainment, and remain good role models, athletes’ contracts should not be regarded as too high and any discussion of reducing them must be put to rest. 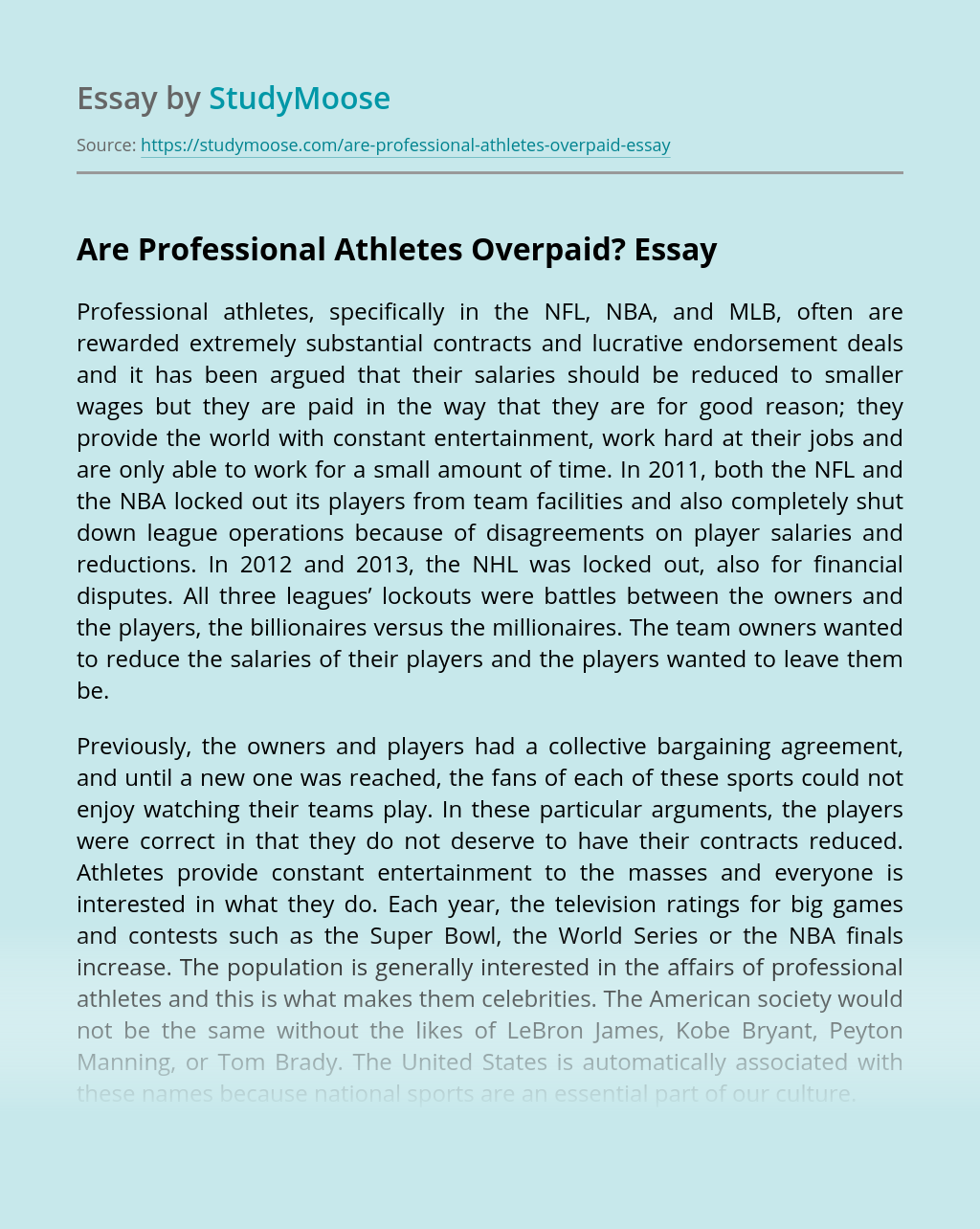