Professional Athletes Being Paid Too Much

Walking through the halls of Sally High one day, my ear caught the words of two young individuals debating over an interesting topic. It was a discussion on the large pay difference between what they thought were hard working Americans and jobs of the entertainment market. As I continued to think more in depth about this current discussion that had just been overheard, I decided to come up with my own opinion.

The same question continued to run thru my mind: why should hard working teachers that are educating the future of America be paid so little in comparison to those who are getting paid solely for America’s entertainment? To many sports fans complain and grumble about how they should be paid what professional athletes are, yet none of them consider the fact that sports fans, who spend hundreds of dollars to go watch a televised event live, are actually the ones supplying the athletes with all that money.

Don't use plagiarized sources. Get your custom essay on
“ Professional Athletes Being Paid Too Much ”
Get custom paper
NEW! smart matching with writer

The enormous salaries that the athletes are paid are a direct result from all of the sports fans who pay to see their favorite athletes play in person, instead of, watching those same athletes on their television.

Americans have been putting very high value on entertainment for decades and pay insane amounts of money for it. For example, the average cost for a ticket to the Super Bowl is roughly $4,000. That $4,000 does not even include the airfare some Americans spend just getting to the game.

The detail that bothers I the most is that people who are educating the future generations are getting paid, on average, 5 figures every year.

In comparison to a professional athlete who is there only for entertainment to America gets paid roughly 7 to 9 figures each year. Even if an athlete sits the bench for 99% of the entire season, they still get paid more than the individuals who are working day-in and day-out to make sure America will have an educated population for generations to come.

As an athlete, I find t extraordinarily annoying when ESPN or ESPNU tells a news story about how a professional athlete listed as a free agent declined an offer of 40 million dollars a year because it isn’t enough money. In my head, I try to tell myself that if I were to be that person, I would play for any team no matter how low the pay was just because of my love for the game. The topic of salary will always be one that is debated, and opinions may vary, but my opinion will always remain the same. Professional athletes are paid way too much in comparison to that of a teacher or a fire fighter.

Professional Athletes Being Paid Too Much. (2016, Nov 11). Retrieved from https://studymoose.com/professional-athletes-being-paid-too-much-essay 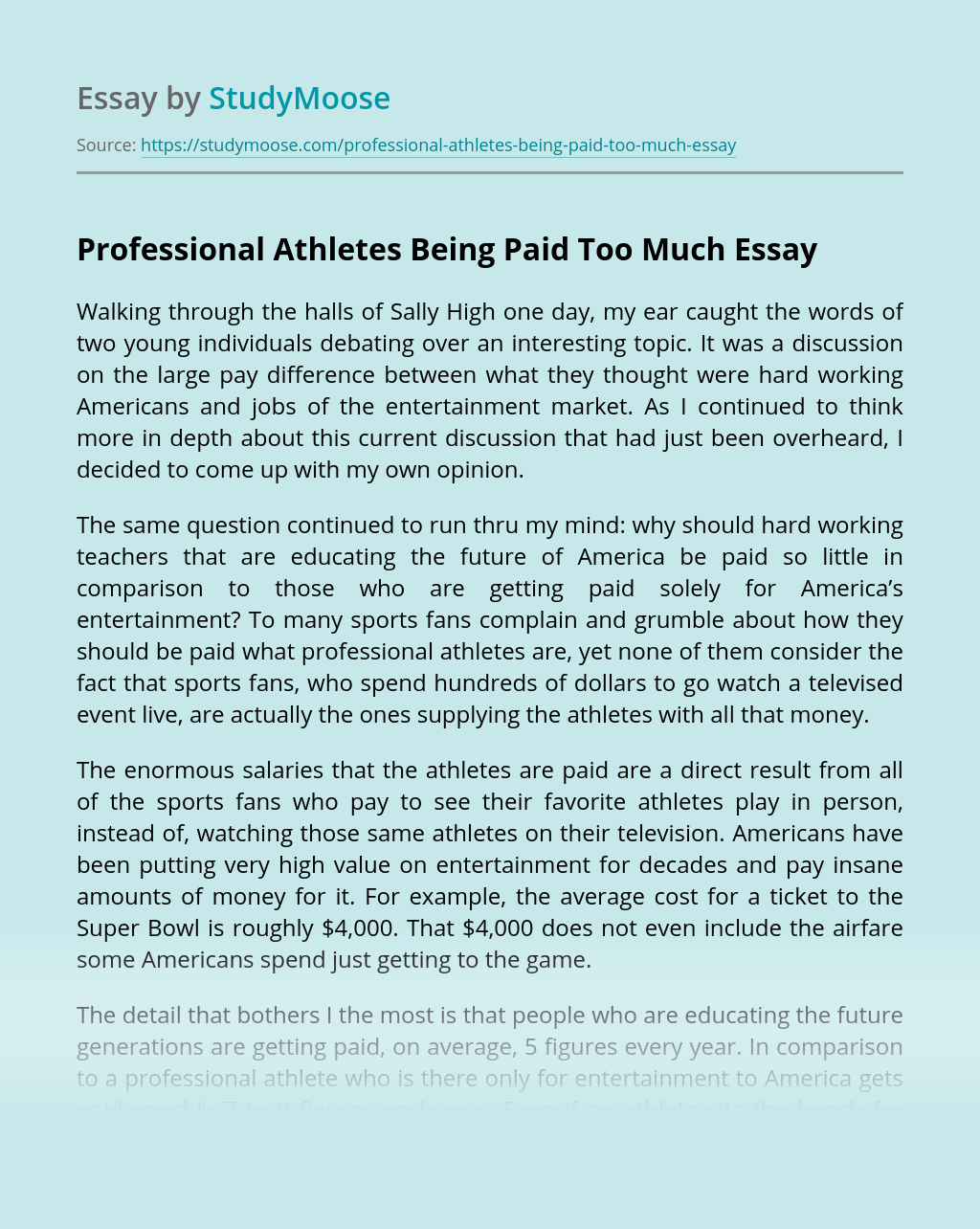