“The politics of the Gilded Age failed to deal with the critical social and economic issues of the times.”

Assess the validity of this statement. Use both the documents and your knowledge of the United States from 1865 to 1900.

Whether or not the politics of the Gilded Age failed in dealing with social and economic issues has long been debated by historians. Peeling away streaks of gold plastered on the deficiencies of the time, the cause of such problems can be unveiled.

Don't use plagiarized sources. Get your custom essay on
“ Gilded Age DBQ ”
Get custom paper
NEW! smart matching with writer

In finding a blame for the corruption within the growing economy and its demands on a wavering society, all fingers point to the politics of the Gilded Age.

Heel to heel with the end of the Civil War, the Gilded Age was a baptism of sorts; it was freedom’s debut and moral consciousness’ rebirth. Slavery was well on its way to becoming a blemish of a freedom-loving country, and the practices of American citizens shifted like a street car on its rail.

The development of a leisure culture encouraged entertainment and play time amongst rapidly growing cities. Industrialization boomed with the encouragement of job-seeking immigrants, European financial support, the government’s nod of approval, and entrepreneurs’ wallets. As idealistic as the circumstance appeared to be- and seemingly close to being realistic- the lines of unspoken social and economic justices blurred. Control and regulation of the businesses and its laborers led to a political tug o’ war. The urbanization of the Gilded Age provides a basis for the understanding of the country’s progress in a court of law and the events to follow the era.

The compelling need to compete for jobs, as well as control of the business itself, was a driving force that had the potential to make or break the success of the times. James Bryce’s The American Commonwealth highlights the “neglect” of the details of politics and the strain it placed on people. With the end of the war came a sudden abundance of material production and development of the West. As quick as the rise of the economy came was as fast as the single breath of rest for the people went. Social reformer Henry Demarest Lloyd called for a “renaissance of [morals]” and a halt on materialistic desires. If the nation continued to expand without reflecting upon itself, the system would fail in dispensing its wealth. The tendencies of wanting to form a monopoly or control the formation of one created a spectrum, a distance between a choice of economic interests and social stability. By ignoring the country’s virtues in question, the government also ignored the well-being of its people.

Citizenship was encouraged through the approval of unions and busts of trusts, but nothing was done to encourage the minority’s rise on the class ladder. The burdens and weight of urbanization was dispensed on the shoulders of the working class. Long hours within factories weakened their physical health and positive perspective of the industrial system. Addressing the relations of labor and capital, it became evident that the success of the industrial system called for a sacrifice of the laborers. (Doc 1, Doc 2, Doc 6)

Money-stuffed business owners steered the government’s actions during the Gilded Age like their own private car. Neither existing government parties found it in their interest to rid of the “grievous wrongs…inflicted upon the suffering people.” Becoming a leading industrial world power, it was easier to refrain from heavy taxing in support of manufacturers. The government’s land’s worth would be increased while the poor’s room to move amongst class ranks decreased. The strategies of both parties focused on distracting the masses with a crisis of tariffs. A critical analysis of the corruption amongst national banks, rings, trusts, and that of capitalists would be ignored much to their delight. So long as the funds of millionaires were a priority in Congress- as the Senate saw to it- the minority was left in the dust of construction and expansion. (Doc 3, Doc 7) As the exploitation of the government came to light, Congress was forced to save face and demonstrate a neutrality towards businesses.

The Interstate Commerce Act of 1877 quenched the thirst for change because it regulated railroads and the pools being formed. It called for carriers to decline from offering “undue…preferences” to any particular person, company, firm, etc. Favoritism would be eliminated, but so would opportunity to advance competitively as exemplified in the act of legislature of 1888. Apprentices that had been indentured had a right to properly learning the skill of their practiced trade. However, as technological advances took control of factories, laborers lost relevance to production. They no longer needed to be mindful of operating machines considering the machine itself did most of the services.

A balance between employers and laborers was virtuously necessary, but concluded in a stalemate. (Doc 4, Doc 5) Despite the nation’s increase in wealth through urbanization and the façade of a prospering people, the fraudulency of the Gilded Age crippled the masses in their rise to security. The competiveness amongst laborers, a battle for control of trusts and their extermination, and the government’s favoritism for big businesses aided in the downfall of an era. What could have been an outwardly and inwardly gold time period merely became a sham. The disappointment of what was being disguised set the stage for the looming shadow of the Progressive Movement. 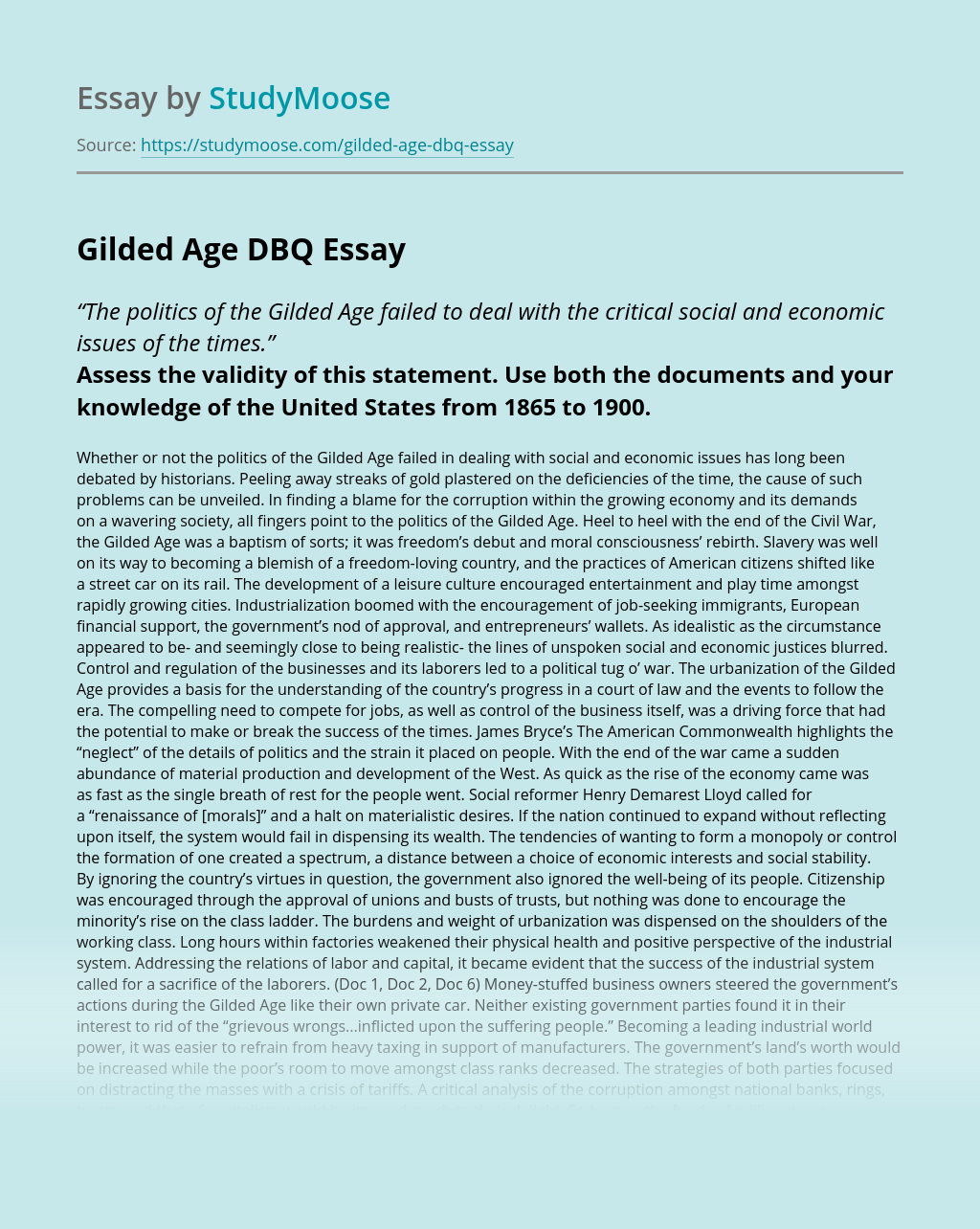