The term “Brain Drain” has come into limelight with the trend of educated and skilled people and workforce moving from one country to another to achieve career gains. The talent of such people as a result becomes available to the nation to which they relocate. The biggest disadvantage of brain drain is the depletion of talent from the native nation which may badly need their skills and talent. It is the migration of country’s intellect which may have otherwise served their motherland and contributed to its prosperity.

Don't use plagiarized sources. Get your custom essay on
“ Brain drain ”
Get custom paper
NEW! smart matching with writer

Thus, this brain drain or ‘Human Capital Flight’ as it may be called, becomes a threat to the growth of countries which lose the human resources, rich in technical skills or knowledge. This has also increased the disparity in the economic and social prospects of the countries across the world .The rich and developed nations grow richer and prosperous while the developing or underdeveloped nations stay poorer and backward. Brain drain is a global phenomenon affecting the developing nations.

Proficient in: The Problem Of Brain Drain

The disadvantage is seen as an economic cost as a part of the training and the education cost which is sponsored by the government is also taken away with their emigration. Thus the country which experiences the drain of skilled resources faces the getaway of financial capital also. Brain drain isn’t a problem of this era only.

Even in medieval times, the conquerors attacked the nation for gold and other wealth and took people of talent and knowledge with them. This problem became pronounced after Second World War when progressive nations like USA, the erstwhile U.

S.S.R. and Germany etc. began to make significant advancements in technology and scientific research attracting talent from foreign nations. Thus men of talent began migrating from less developed nations to these countries. The reasons of brain drain are many including the lack of opportunity, political instability, health risks and many more. Many students leave their native nations for scientific and technological courses which are not offered by their own country and settle out in the country of study owing to better career opportunities, lucrative remunerations, security of life and health all of which lack in their country of birth. Also they seek professional satisfaction in the country where they work and thus are ready to continue leaving their own nation. On the top of all this, the bureaucrats of the country fail to realize the potential and the worth of this intellect and thus they are unable to retain the cream of researchers and men withextra-ordinary talent. All these factors combined together trigger the process of brain drain. Brain drain for the nation from which the emigrants leave to settle into the nation that promises better work opportunities becomes brain gain for the latter.

Even countries like Europe were faced with the problem of brain drain until the introduction of green card that helped them gain more brains and compensated for the drained brains. At present, countries like India, Pakistan and Russia are the sufferers of this problem and losing their talent very rapidly. Unemployment, corrupt political systems, inappropriate and unsafe work and social life as well as poor compensation, prompts the skilled and trained people to leave their own countries and seek promising opportunities in developed nations where they get more success Under utilization of talent, inadequate professional tools, lack of growth and unsatisfactory living conditions are also key factors in the emigration of the skilled workforce from these nations. India loses around 3 percent of her skilled workforce including teachers, doctors, engineers, scientists etc. to developed nations like USA. Brain drain does more harm than is visible from an outer view. Besides depleting the natural supply of intellectual talent, it reduces the number of dynamic and innovative talent be it the academics or the booming entrepreneurs. The nations that lose the talent in turn have to depend upon foreign assistance for technical purposes. The technology slowly becomes the onus of the developed nations when they grow richer with more resources contributing to their progress.

Even the migration of medical practitioners who are highly trained to other developed nations makes the condition of health care in the native nations miserable. As a result, in case of emergencies and more complex treatments or surgeries, people from such countries have to bear expensive travel and cost of treatment and accommodation in nations that provide these facilities. As countries lose their talent, its progress slows down and also lacks the contribution of the highly skilled human force, which has left the nation. It leads to a scarcity of skilled resources which then began to charge high for their service to the nation and its countrymen. Poorer nations like Africa suffer the worst from this problem and thus its development remains hindered. The issue of brain drain is an international phenomenon and an outcome of the trend of globalization, but unlike other benefiting affects of it, brain drain has a negative
impact. The problem of brain drain can be effectively tackled. For this, countries suffering from it have to improvise their own socio-economic conditions and provide better salary scales and safe and healthy work conditions to their human capital.

Better and updated labs equipped with latest equipment can help retain more scientists and researchers leaving their country owing to lack of research opportunities. At an international level, the nations which gain these brains should promise to send equivalent talent to the nations losing their human resources. Good governance is also important as they decide the policies that govern the security and standard of living of its people. As discussed, some brain drain results from the stage of education only when individuals move to other nations offering better educational courses. If these individuals are offered better education opportunities in native countries, the emigration can be controlled at a preliminary level. Governments need to show commitment to support research while allowing them to carry on their experiments freely with much independence. To conclude there is a need to review the social, political and economic conditions in the nations suffering from phenomenon of brain drain to provide better security and work opportunities to the skilled resources in the native nation. 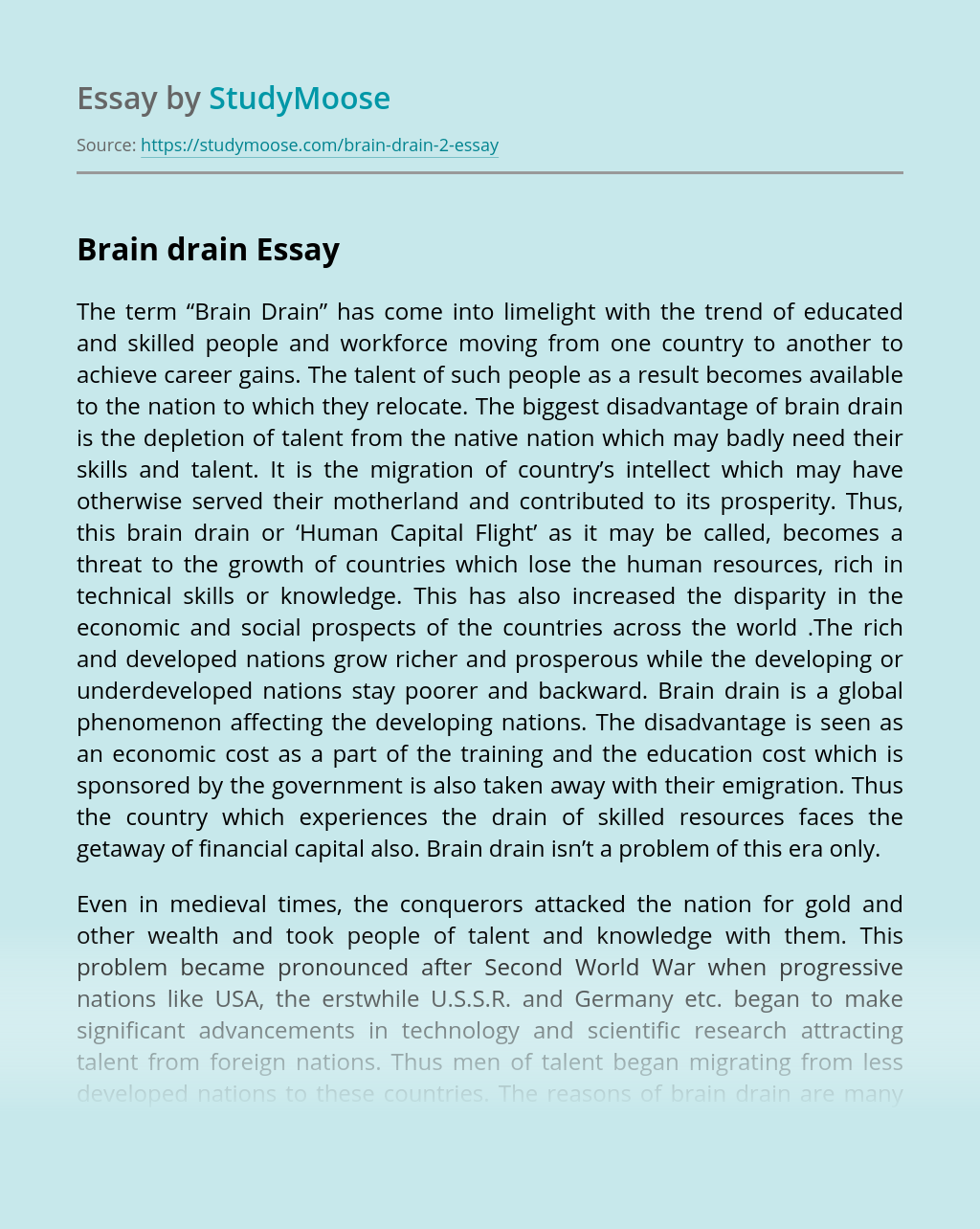