Professional Athletes are not overpaid

In my short life, if there is one thing I have noticed about the sports industry, it’s that money talks. Drew Brees just recently signed a $100 million dollar contract with the New Orleans Saints to play for five more years. Kobe Bryant of the Lakers made $25 million last year alone, while Alex Rodriguez made $32 million. This sure seems like a lot on money for men to be making just to play sports, or is it? Professional Athletes are very good at what they do and deserve every penny they get for the hard work and dedication they put in to just make it to the big leagues.

Don't use plagiarized sources. Get your custom essay on
“ Professional Athletes are not overpaid ”
Get custom paper
NEW! smart matching with writer

It has become a tradition in this industry to have salary disputes and lockouts. However, what is really at the root of these negotiations? Maybe the players are being greedy and want more money and perks just to play. I used to think this way, but now I am not so sure that the players don’t truly deserve every penny they get.

I don’t think there is one person who could argue that professional athletes are very good at what they do. These athletes have tremendous dedication to the games they play.

Getting to the professional level is not as easy as it seems. Many high school basketball players dream of being the next Kobe Bryant or Lebron James, but the truth is that according to the National Collegiate Athletic Association (NCAA), there’s only a . 03% chance that they will make it from high school to the NBA, with a slightly higher chance of going from the NCAA to the NBA being 1.

2%. Professional Athletes are in an elite league. The amount of time and effort they put into their training to maintain their bodies’ is extraordinary.

Many people argue that especially in today’s economy where people are barely making their mortgage payments or deciding between utilities and groceries, it is hard to hear about a professional athletes quarrel over the millions in salary they should earn just to play a game. Many people spend the majority of their lives working hard to only earn a small fraction of what a professional athlete makes in one year. Are the athletes the only ones at fault for these gargantuan salaries? I don’t think so.

There are many rofessionals out there that make more than these athletes and no one complains about them. Consider the owner of Starbucks, Howard Shults, who made $98 million in 2008 for selling coffee products. That’s more than Brees, Bryant and James put together. Athlete’s become larger than life figures in person and with their salaries because of their fans. Everyone at some point in their lives has purchased tickets or merchandise relating to one of their favorite athletes. We are the ones that continue to perpetuate the ability for them to earn more and more each year.

We constantly buy into the sports mania of official licensed merchandise, tickets, food and beverages at every venue. We as a society spend our hard earned money to see and be entertained by these athletes year after year. If people have a problem with the amount of the salaries they make, maybe they should stop going to games or refrain from buying their kid a jersey with their favorite players number on it. If society doesn’t buy into the sport then there is no money to be made. If there is no money to be made then there is no interest in bring the events to the fans.

Let’s face it the sports industry is just that, an industry and business. Businesses are out to make money. To do that they need to have a product people want and in sports the athletes are the product. These athletes are just employees of the business they are in trying to get the most out of what they put in. Many of us get inspired when we see the achievements of some athletes. They sometimes help us see our own potential if we work as hard as they do. One of the most important reasons professional athletes deserve their pay is the beatings they take on their bodies’ season after season.

Every time a player runs onto the field or court they run the risk of a season and sometimes life threatening injury. For example, according to Health Day newsletter the percentage for concussions in the NFL rose 21% in 2010. In 2010 the league reported 154 concussions in just the first half of the season. Many of us will recall the devastating injury of Buffalo Bills player Kevin Everett in 2007. Everett suffered a fracture vertebra and it was questionable whether he would ever be able to walk again.

Many occupations don’t require that you intentionally put yourself in harm’s way for the sake of entertaining an audience. I realize professional athletes love what they do and would change their occupations for anything, but as a society we should recognize that their lives are not always as glamorous as it seems. After years of battle wounds their bodies are full of aches and pains. Many injured players find it hard to get health insurance because of the high cost to insure them and the fact that many insurance companies refuse to cover pro athletes.

Professional athletes in general have a short career life. The average person will retire between the ages of 65-75. However, Drew Brees’ career will most likely be over in 5 years at the young age of 38. Although many players go on to have alternate careers after their professional athletic career, many are too beat up or don’t have the skills to perform any other type of career. Bottom line is we as fans create the demand for these professional athletes to continue to raise the bar for our own entertainment. It’s all about supply and demand.

The sports industry is willing to supply us with the extraordinary talents these athletes bring to the fields and courts and we as a society continue to demand more out of them. The more we demand the more they supply, the more they supply they more we pay and the more the athletes will be paid. Athletes are not paid for what they do; they are paid because people want to watch what they do. So again I must state professional athletes are very good at what they do and deserve every penny they get for the hard work and dedication they put in to just make it to the big leagues and entertain fans.

Professional Athletes are not overpaid. (2017, Jan 31). Retrieved from https://studymoose.com/professional-athletes-are-not-overpaid-essay 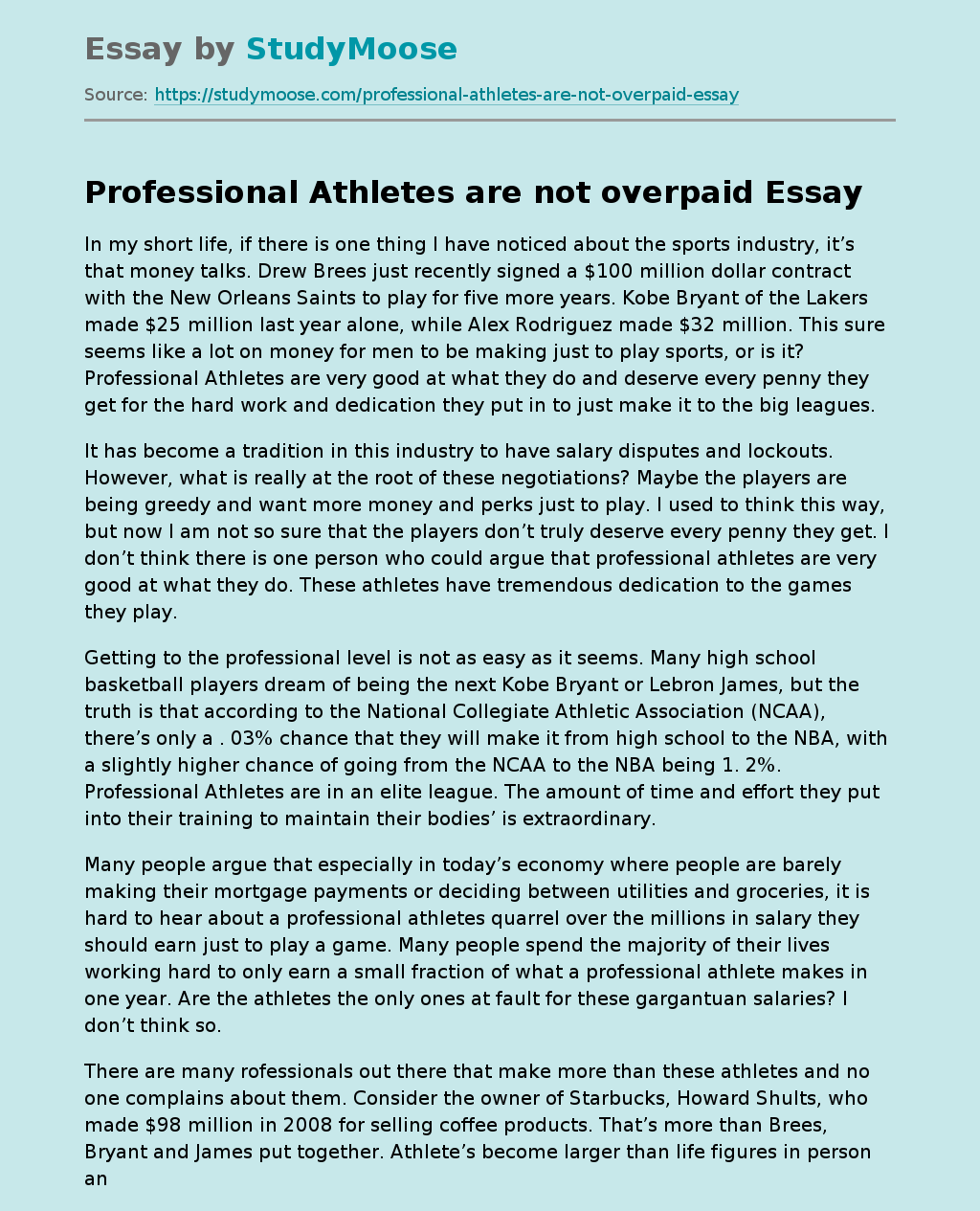