One of the least understood characteristics of marketing activities is their productive nature. It is unfortunate that the term “production” is used in two different ways, causing considerable ambiguity and confusion. In one sense, it is used to denote the result of industrial activity, as in referring to the output of farms, factories, or mines. A major function for most business firms today is that of establishing and maintaining a market for their products. In the case of such simple business enterprises as roadside markets, ordinary display and the more elementary forms of personal selling are the only expression of this function.

Don't use plagiarized sources. Get your custom essay on
“ Productive nature ”
Get custom paper
NEW! smart matching with writer

On the other hand, many manufacturers, middlemen, and producers of business or personal services conduct elaborate campaigns to arouse or stimulate demand for their products, or to divert such demand from competitors. In each case the business organization is engaged in one of the most essential marketing functions, that of demand creation or selling (FAVILLE, 1961). The term demand creation is used in the rather loose, broad, and very general way that has become customary in all discussions of advertising and personal selling.

For example, the word demand must not be interpreted to mean a stubborn insistence upon the product advertised, for seldom is it meant to be other than a mere recognition, a favorable impression, or a preference with respect to it. More important, the word “creation” must not be interpreted to mean as bringing into existence something which has not existed before, for usually it refers to the bringing into consciousness and action motivations that have been dormant or otherwise ineffective.

Actually, then, instead of “creating demand” in the literal sense, what selling effort (including advertising) does is to arouse, stimulate, or direct a prospective buyer’s conscious or dormant desire for want satisfaction that results in action with reference to a given product, service, or seller. Advertising and personal selling are not as a rule in competition but rather supplement each other. A marked characteristic of personal selling is that the message is usually delivered to a definite prospect.

Advertising, except for direct mail, on the other hand, must appeal to the mass mind, or at least to the average individual within some market segment to which the appeal is directed. Moreover, personal salesmanship is adaptable. The message can be adjusted to the individual prospect and appeals can be selected which are of most importance to him. The speed of delivery and the language of the sales argument can be adjusted to the prospect’s training or general intelligence.

Objections can be met as they arise, and thus effective demand can be created. Advertising is used, as a rule, to assist the salesman. It aims to give preliminary information and to break down resistance which might operate to prevent the later, effective delivery of a sales message. Advertisements in trade magazines can be used, for example, to tell the story of a certain type of business machine and to suggest that many companies have used such machines with success.

Purchasing agents and mechanical engineers are much more apt to give a careful hearing to the salesman for a machine of this kind when he calls than would be the case if they knew nothing about the machine in advance of the call. Thousands of people may receive favorable impressions about a certain kind of automobile because of the manufacturer’s advertising, but as a rule it is not until after further selling effort by the dealer’s salesman that a purchase is actually made (DAVIS, 1961). 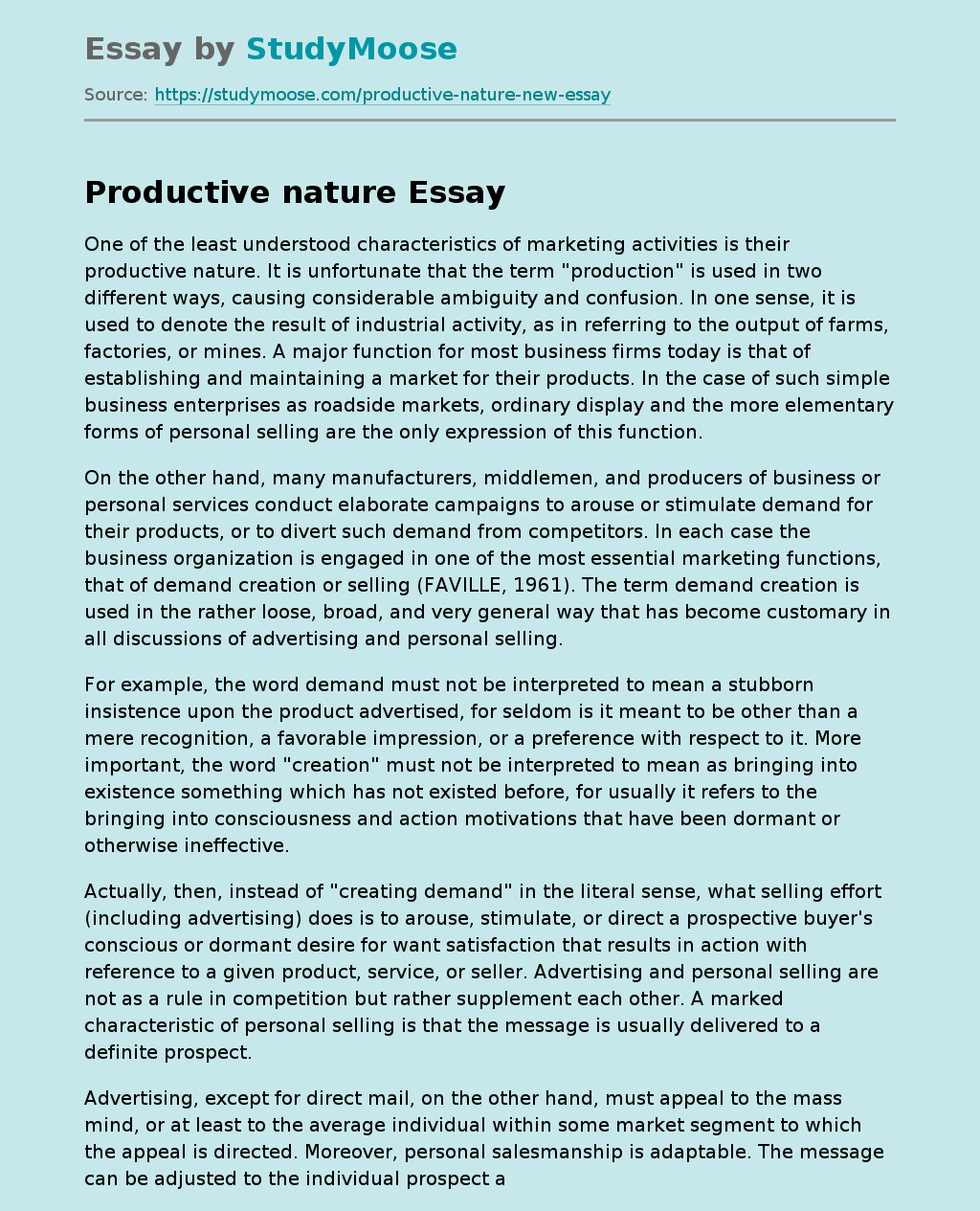