Inventions of the Renaissance had a very big impact on people’s life. In order to get more knowledge and to make real life more interesting and creative, people started to invent. There were many inventions of the Renaissance: telescope, compass, printing press, etc. But the most important technological advance of all was the development of printing, with movable metal type, about the mid-15th century in Germany. A German named Johannes Gutenberg invented the printing press in 1436. Printing press invention had a large impact on the value of the books, religion and reformation and education.

Turn in your highest-quality paper
Get a qualified writer to help you with
“ Printing Press Essay ”
Get high-quality paper
NEW! AI matching with writer

According to the Encyclopedia Britannica, by 1500 the presses of Europe produced some six million books.

This reflects through the church. The Bible was the first book to be mass-produced. Two hundred copies of the two-volume Gutenberg Bible were printed; this information is presented on the web site www.historyguide.org/intellect/press.html. People could buy the Bible and they did not go to churches anymore. This leads to Reformation and new religions. People realized that they could prey and confess at their homes.

People set up the rules when, where and how they can pray and confess. Hundreds of new religions started to form. Some of them where thinking that the church was not right and that is why Reformation occurred.

In the Middle Ages, the only educated people in Europe were church leaders. But with the invention of printing press everybody could afford to buy a book and become more educated. Education was very important in the Renaissance because it opened people’s minds to thinking. The power of the books and educated people were more important than the church. People were reading as much as they could and spreading their knowledge everywhere.

In conclusion, without the development of the printing press, the Renaissance may never have happened. Without inexpensive printing to make books available to a large portion of society, the son of John Shakespeare, a minor government official in rural England in the mid-1500s, may never have been inspired to write what are now recognized as some of history’s greatest plays. What civilization gained from Gutenberg’s invention is incalculable. 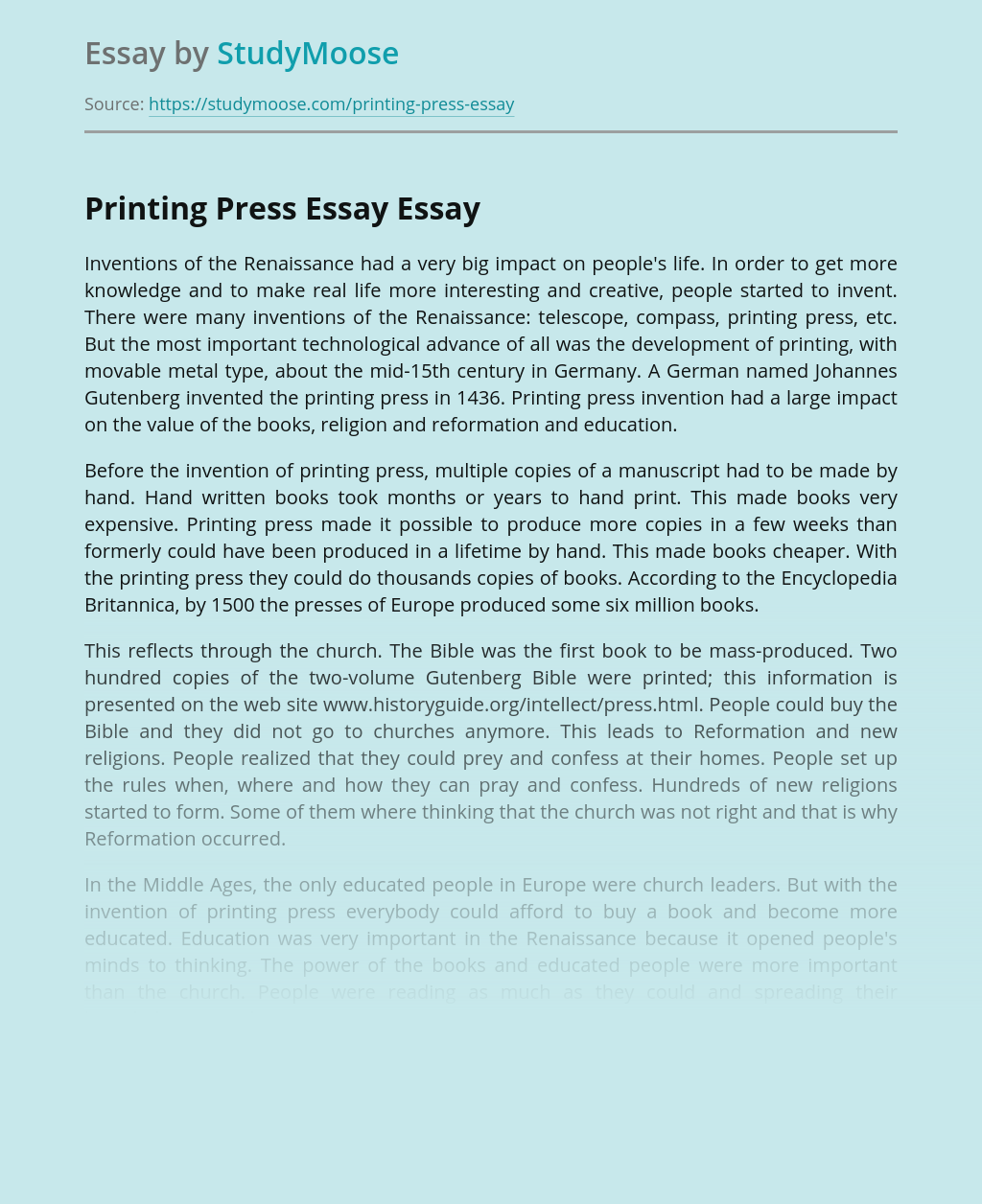 Turn in your highest-quality paper
Get a qualified writer to help you with
“ Printing Press Essay ”
Get high-quality paper
Helping students since 2015
Stay Safe, Stay Original