Pride and Prejudice: an analysis of Mr. Wickham's character

To begin with, Wickham appears to have a good social etiquette which impresses the reader and Elizabeth, “Mr. Wickham was the happy man towards whom almost every female eye was turned”. Wickham makes a firm first impression and he appears to be amiable with a friendly disposition. “His appearance was greatly in favour…fine countenance…very pleasing address”, Wickham instantly takes Elizabeth’s favour and he seems a deferent character.

Wickham is clever enough to encourage Elizabeth into thinking ill of Darcy by initially forming a trust with her and as Lizzy already dislikes him, it is easy for her to believe Wickham, “I have known him (Darcy) too long and too well to be a fair judge.

Get a verified writer to help you with Pride and Prejudice: an analysis of Mr. Wickham’s character

It is impossible for me to be impartial”…”ill-tempered man”. The reader is intrigued into Wickham’s opinion of him initially due to his social intelligence, his amiability and his first impressions to the town.

Darcy by making himself seem the victim of the series of events between the two men. Wickham: “I cannot accuse myself of having really done anything to deserve to lose it…he hates me.” Due to the trust the reader and Lizzy have in Wickham, his story is accepted and we succumb to the claims he makes. Lizzy shows her naivety by immediately believing the story and replying “He deserves to be publicly disgraced!”

Wickham’s character begins to be doubted in chapter eighteen when Darcy says “Mr. Wickham is blessed with such happy manners as may ensure his making friends – whether he may be equally capable of retaining them, is less certain.

” However, as Darcy appears to us as such an ill-mannered character, we are unsure whether to believe him. His character is further doubted when Miss Bingley complains about Wickham to Elizabeth, “George Wickham has treated Mr. Darcy in a most infamous manner…Mr. Darcy is not in the least to blame.” Lizzy and the reader start to doubt their initial appraisal of Wickham as his likeable character far outweighs his shortcomings.

Elizabeth shows her fond feelings towards Wickham by discovering that he is interested in the acquaintance of Miss King for merely the £10,000 by saying “I should at present detest his very name…my feelings are not only cordial towards him.” The reader now sees Wickham’s bad intentions and how Lizzy is too fooled by his charm to see it.

Wickham’s bad character is finally confirmed in Darcy’s letter explaining Wickham’s purposes at length, “he had some intentions of studying law…his life was full of idleness and dissipation…(Georgiana) was persuaded to believe herself in love, and to consent to an elopement…Mr. Wickham’s chief object was unquestionably my sister’s fortune.” Wickham is instantly seen for what he really is; superficial, deceitful and selfish with no concern for the damage he causes by his desire for pecuniary gain and greed. He masks his true character from Elizabeth and the reader and shows his true character of depravity.

Pride and Prejudice: an analysis of Mr. Wickham’s character. (2017, Oct 24). Retrieved from https://studymoose.com/pride-and-prejudice-an-analysis-of-mr-wickhams-character-essay

Get a verified writer to help you with Pride and Prejudice: an analysis of Mr. Wickham’s character 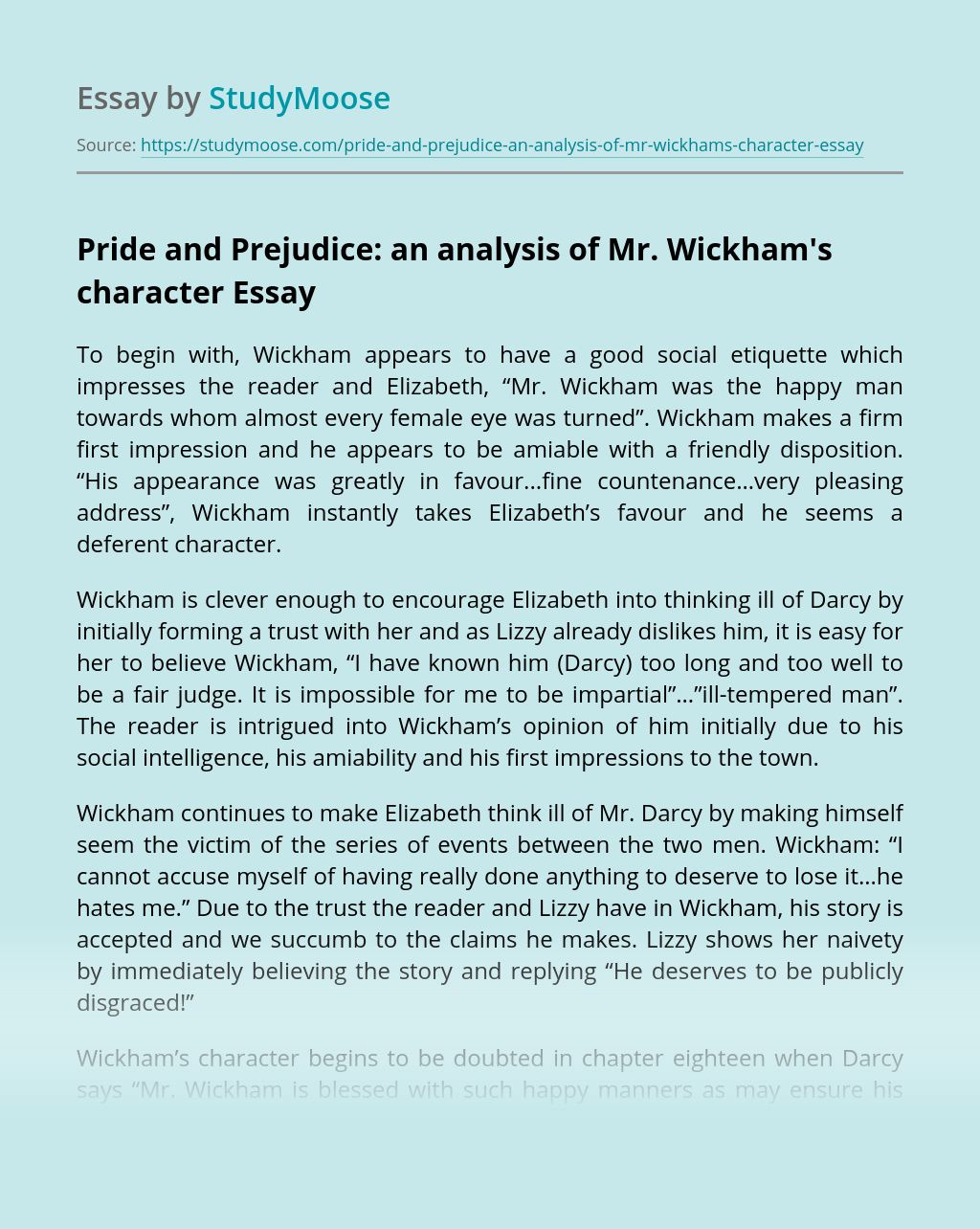 Role Of Minor Characters In Pride And Prejudice

The Function of Minor Characters in Austen’s Pride and Bias Perhaps the most striking part of Jane Austen’s novel Pride and Prejudice is her mastery of characters and the results that each has on the plot, styles, and the other characters’ actions. Though her small characters are much less noticeable than the major ones, she...

In the beginning of reading this classic love story, I could have fallen asleep while reading and I actually did; but while the story went on it grew more interesting I couldn’t put my book down. The pride and prejudice referred to in the title of this Jane Austin novel prepare the reader for the...

Get Essay
Pride and Prejudice Themes and Literary Devices

PRIDE AND PREJUDICE Major Themes The pivotal theme is that marriage is important to individuals and society. Throughout the novel, the author describes the various types of marriages and reasons behind them. Marriage out of economic compulsions can be seen in Charlotte’s marriage to Collins. Marriage due to sensual pleasure can be seen in Lydia’s...

Elizabeth Bennet in "Pride and Prejudice"

Individuality refers to the character or qualities which distinguish one person from another. Ones uniqueness constitutes a strong distinctiveness in his/her character. Thus, when this sense of character is juxtaposed against the concept of individuality, the mutual association results in the inherent emergence of a persons true identity. Although the distinguishing of separate individuals personalities...

The novel Pride and Prejudice involves many topics and symbolizes different aspects of life and behavior of people. In this essay I am going to analyze and discuss the theme of parenthood. I will only comment on the characters that are parents or come over as parents, namely, Mr. Bennet, Mrs. Bennet, Mr. Gardiner, Mrs....

Jane Austen’s novel Pride and Prejudice (1813) is believed to originate from the manuscript called First Impressions that have been written between 1796 and 1797. The initial title indicates that characters’ behavior and evaluations are influenced by their first impressions. The second title stresses the importance of such psychological traits and mechanisms as pride and...

The novel “Pride and Prejudice” by Jane Austen was set at the turn of the nineteen century, where women had little choice. Generally when reading this novel it may seem as if Austen is reinforcing or eroding sexist stereotypes of women. Rather than approving the stereotypes, she makes the reader aware of them through characters...

The Social Class Of Pride And Prejudice English Literature Essay

Pride and Prejudice has four chief inflexion points: first feeling, misinterpretation, attractive force, and matrimony. The first feeling is where all the members of the aristocracy and the common people have a opportunity to measure each other and their worth. The lone two people who have any opposition from this fickle but expected judgment competition...