The election of 1912 followed a “great victory” for Theodore Roosevelt (1901-1908) and a “drastic failure” for William Howard Taft (1908-1912), as seen through the eyes of the public. Both presidents represented the Republican Party, but before the elections of 1912 Roosevelt separated, along with his progressive Republicans and insurgents, and formed a new political party – The Progressive Party. Taft remained a Republican and his party mainly consisted of conservatives and “Old Guards”, as well as some less radical supporters of the Square Deal.

Don't use plagiarized sources. Get your custom essay on
“ Presidential Election of 1912 ”
Get custom paper
NEW! smart matching with writer

During the same period, the Democratic convention nominated Woodrow Wilson, with the help of William Jennings Bryan, who belonged to the progressive wing. All candidates focused on the issues of regulating business, interstate commerce, and political reform. Wilson would go on to attack matters concerning the protective tariff, and the flaws in our nation’s banking system. Although Taft was not as active in ensuing the campaign, because of realization that he already lost public support, many of his ideas still remained in tact.

William Howard Taft was a man our nation could trust. During his presidency in 1908, he had promised to address issues largely ignored by Roosevelt, and address them he did. The public may not have seen the actions he took as positive reforms, but when studied, it is almost too evident his presidency has lead to greater good than Roosevelt’s. He had prosecuted twice as many antitrust cases than Roosevelt. He had established the Tariff Board to investigate tariff rates, and began to shape this nation’s federal budget.

Having served as a judge, whose greatest ambition was to sit on the Supreme Court, Taft can only be labeled a highly intelligent man who abides by the law, and so produces only in good for the Union.

If elected, Taft would bring about more positive change concerning the tariff issue, and would do so under lawful means. If those who make the bills do so illegitimately, Taft would not recognize them and turn to his vetoing power as president. He believed in strong party ties, and so would make sure everyone in his Republican Party followed the laws made for the benefit of the public. Voting for Taft and his party would serve the country a greater benefit than popularly thought.

Theodore Roosevelt cannot be forgotten however. He is the one who set the spark for reform. He is the one who stood up for the people through any means necessary. Roosevelt believed in the power of the people, and so would be needed in order to bring about a true democracy. He would give the people the voting power of initiative and referendum. He did not forget our mothers, and would support laws pro-woman suffrage. He believed in every man’s right to education, and would not deny our new generation what was rightly theirs, that is why he and his Progressive Party would stand up for child labor prohibition. Another program of his progressive package was revision of the currency system, to help our nation’s economy, and thus help our nation’s markets and people. Business had been avoiding the law for far too long, and Roosevelt knew it was time to bring about business regulation. The only way to do this would be if his Party was “as strong as a bull moose”, and looking back to his previous presidency in 1901, it is not difficult to see that happening.

Woodrow Wilson was another candidate for the public. His party, although split between Democratic conservatives and progressives, would act progressive as a whole, due to the majority’s desire for reform and the Democratic necessity to get back into the House. Wilson was a man of integrity, whose previous careers proved this. Eight years as president of Princeton University, he raised standards, improved teaching, and further instilled pragmatic ideology. As governor of New Jersey, he fought political bosses who sought personal gains and wealth, opposite to the interests of the people. He would indeed follow by the principles of his political platform – The New Freedom, in which he viewed monopolies as evil, hurtful to society, and a destruction of free competition.

As an advocate against trusts and for competition, he would certainly lower tariff rates, opening the American market to foreign products, and at the same time opening foreign markets to American goods. Another part of his reform program, the revision of the baking and currency system, would help the economy by providing business with cheaper and more flexible credit. With all these reform programs, plus Wilson’s well known ambition for achievement at high office, it is not difficult to see this man and his party as a successful stepping stone for our nation as a whole.

As it turned out, Wilson did receive the Presidency in 1912, but it seemed the people were almost equally divided three ways. Because of the split in the Republican vote though, Wilson carried more states and became President. As soon as Roosevelt left the Republicans and formed his own party, Taft knew the Democrats would hold the majority of electoral votes. It seems each candidate would have been an able president, but Wilson was without a doubt the best candidate. Taft’s party was left with a majority of conservatives who would hold power in various offices, and try their best to outwit the public in their own favor. Roosevelt’s party, although funded adequately by wealthy business people pro-reform, was full of amateurs who knew little about politics and its system. Woodrow Wilson’s party was the best, because of their experience in politics and platform for reform. 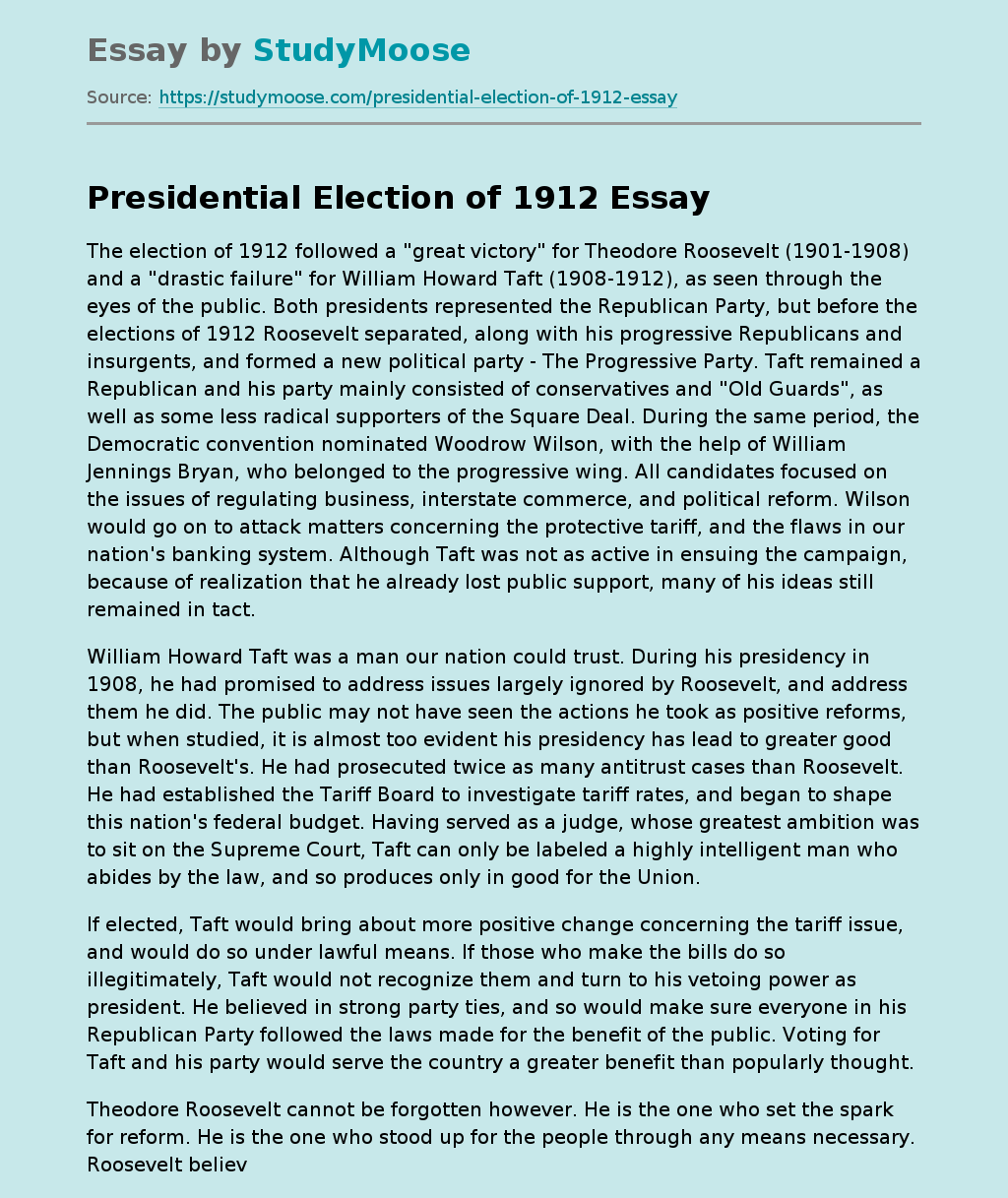