Positive organizational scholarship is an emerging discipline in organizational behavior and is about positivity in organization. The need for it emerged to bridge the gap between moral and rational objectives. It is not a new science, it is the new way of looking at things, it’s like you have just changed your glasses. In today’s world, society is facing extremely tough challenges in the form of global warming, natural disasters, economic recession, unprecedented homelessness, terrorism and the draining continuation of war.

Don't use plagiarized sources. Get your custom essay on
“ Positive Organizational Scholarship ”
Get custom paper
NEW! smart matching with writer

So at this moment of extreme negative happenings and uncertainty, what is needed to be emphasized and brought up is positive. With all this sadness and horror, where in the world does a science based on testing happiness, wellbeing, personal growth and ‘the good life’ ? t into the modern-day agenda? So, Positive psychology; is the study of topics such as happiness, optimism, personal growth and subjective well being. It promotes the factors that allow the groups and communities to thrive or flourish.

At the current stage in this world of negativity, positive psychology focuses on positive experiences at three time points a) past centering contentment; b) present focusing current happiness c) future including optimism and hope. We should know that what a good life is ? Aristotle and Plato used to believe that when people carried out a virtuous life they would become authentically happy. The happiness are of two types in positive psychology according to Seligman, one is hedonic happiness which is high level of positive affect and low levels of negative effect, in addition to high subjective life satisfaction.

See more: how to start a scholarship essay

Other is eudemonic wellbeing which focuses more on creation of meaning and purpose in life. (Hefferon & Boniwell, 2011) A science of positive subjective experience, positive individual traits, and positive institutions promises to improve quality of life and prevent the pathologies that arise when life is barren and meaningless. The model of Seligman of Positive psychology is divided into three parts: The pleasurable life, the good life, and the meaningful life. The “pleasurable life” is about things like shopping, eating, drugging, meaningless sex, etc.

The research is finding that having more pleasures does not increase life satisfaction. The “good life” as defined by Seligman is about understanding and using one’s core strengths/virtues in work and love and play. He, in conjunction with Chris Peterson, developed a VIA Signature Strengths Survey found that Having a life of high absorption does correlate to life satisfaction measures according to Seligman. Lastly, the “meaningful life” is when a person uses his/her strengths for the purpose of something larger than him/herself.

Choosing to live a life of faith, purpose, meaning, correlates to life satisfaction measures. Marty also sees this aspect of his model directly related to Positive Institutions—those organizations that promote positive character development and/or meaning. He’s mostly focused on non-profits and religious organizations but others are applying it to for-profit organizations. (Seligman & Csikszentmihalyi, 2000) An approach that is positive to selection, development, and management of human resources in organizations has been emphasized by both scholars and professionals over the years.

A wide variety of positively oriented high-performance work practices in placement, compensation, and motivation and their underlying strategies, structures, and cultures have also been extensively studied and supported for their contributions to organizational performance and competitiveness. Research and consulting by the Gallup Organization also supports the importance of positive, strength-based organizational cultures and human resource practices . (Buckingham & Clifton, 2001).

For example, factors such as effective selection and placement practices that capitalize on employees’ talents, clear and aligned goals and expectations, social support and recognition, and opportunities for growth, development, and self actualization have been found to significantly contribute to employee engagement, customer satisfaction, and ultimately organizational profitability and growth(Harter, Schmidt, & Keynes, 2003) On the academic side, the positive organizational scholarship or POS movement has been instrumental in providing macro-level scholars with a conceptual framework for organizing and integrating their research on positive organizations (Cameron et al. , 2003).

By using essays on critical theory in organizational science to consider POS research, and drawing from the principles of Gestalt psychology, it is argued that the important distinctions between POS and traditional organizational scholarship lie in POS’s emphasis on positive processes, on value transparency, and on extending the range of what constitutes a positive organizational outcome. In doing so, it is concluded that the primary contribution of POS is that it offers an alternative to the deficit model that shapes the design and conduct of organizational research. (Caza. & Caza. , 2008) There are several reasons that exist for the neglect of positive phenomena in organizational science.

They include a) Lack of valid and reliable measuring devices b) the association of positivity with uncritical science c) the fact that negative events have greater impact on people than positive events(Baumeister, Bratslavsky, Finkenauer, & Vohs, 2001) The first reason for the neglect towards POS concerning measurement and instrumentation, most positively focused at work up to now has been at the psychological level. For example only surveys had been used up till now for finding out anything related to it. Most scholarly work in POS has been conceptual and definitional rather than empirical. Little empirical work has been published. (Cameron, Dutton, & Quinn, 2003). The article by Losada and Heaphy uses a model to estimate team effectiveness. Communication patterns in 60 top management teams were observed and coded in day long strategic planning sessions. The ratio of positive to negative communication was ranging among high, medium and low performing teams.

Positive teams performed significantly better Similarly Cameron, Bright and Caza’s study in which they surveyed organizations across a number of industry types, and eventually they found out that the organizations scoring higher on virtuousness had a better performance than the other ones. The second reason to the neglect towards POS is that the topics related to it have sometimes been associated with non scholarly prescriptions. Hope and optimism for example have been interpreted as wishful thinking. POS uses the word scholarship to identify its scientific and theoretical foundations. It is committed to documenting, measuring, and explaining usually positive human experiences in organizations.

The third reason for the dearth of POS illustrated by Baumeisteret et al’s concluded that the events that are negative for example losing money or receiving criticism will always have a greater impact on the individual than the positive events such as winning money or receiving praise. Many good events can overcome the psychological effects of a single bad one. In case the numbers of good and bad events are equal then the psychological effects of bad ones always outweigh the good ones. This tells us that the neglect of problems and challenges might threaten the survival of individual. And the neglect of positive might only result into regret or disappointment. (KIM S. CAMERON & CAZA, 2004)

Identifying the factors that lead to joy and happiness, hope and faith, and “what makes life worth living” represents a shift from reparative psychology to a psychology of positive experience. Similarly, Positive organizational scholarship examines the positive side of organizational performance. It investigates positive deviance, or the ways in which organizations and their members flourish and prosper in especially humane and extraordinary ways. It investigates virtuous elements in organizations such as compassion, forgiveness, dignity, respectful encounters, optimism and positive effect, integrity, and wisdom. This emphasis parallels a new movement in psychology that is shifting from the traditional focus on illness and pathology (e. g. , deviancy, abnormality, and therapy) toward a positive psychology that focuses on human strengths and virtues. (Dinnah Pladott, 2003)

Pos is concerned with understanding the integration of positive and negative conditions. Positive Organizational Scholarship (POS) and Positive Psychology are focused on understanding the conditions and processes that explain flourishing. What differentiates POS is an explicit interest in understanding and explaining flourishing in organizational contexts (including individuals, groups, units and whole organizations). Flourishing refers to being in an optimal range of human functioning and is indicated at the individual level by goodness, generatively, growth and resilience.

At the collective level of groups and organizations, flourishing may be indicated by creativity, innovation, growth, resilience, thriving virtuousness or other markers that a collective is healthy and is performing in an “above normal” or positively deviant range. POS also focuses on the development of individual, group and collective strengths that represent forms of individual and collective excellence. POS unites existing domains of organizational inquiry focused on flourishing. This includes work on flourishing indicators such as creativity, engagement, flow, growth, health and well-being, as well as contributors to flourishing that consider features of the organization, group and job contexts. 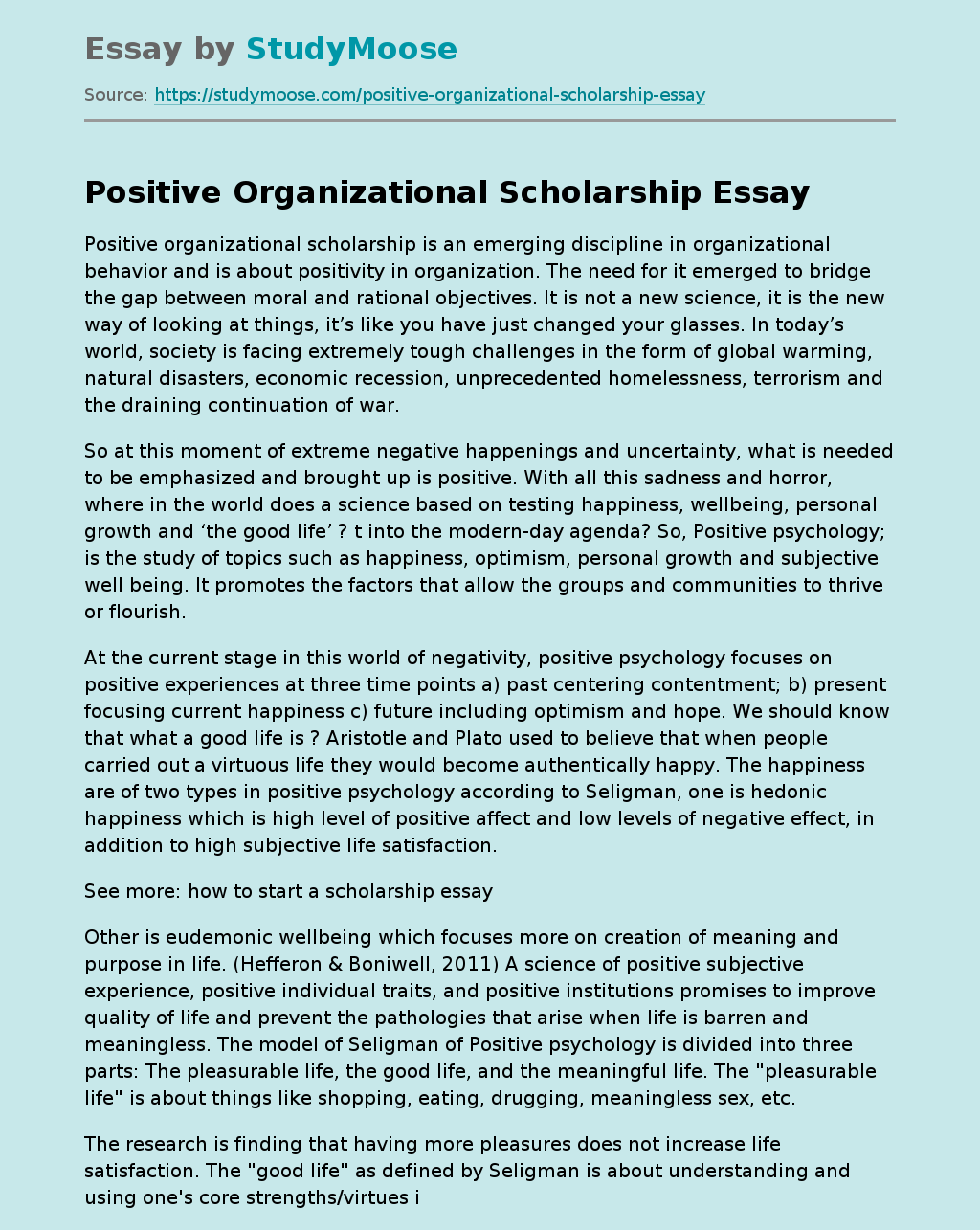