Leadership is the process of influencing people and providing an environment for them to achieve team or organisational objectives. As a property, Leadership is the set of characteristics attributed to those who are perceived to use such influence successfully. Leadership involves neither force nor coercion. It is widely believed in the world of business that leadership is the key ingredient in the recipe for corporate achievement. Typically, when we speak of leaders we are referring to people who influence others without threat, using non-coercive means.

Turn in your highest-quality paper
Get a qualified writer to help you with
“ Leadership in organizational behavior ”
Get high-quality paper
NEW! AI matching with writers

In fact, this characteristic distinguishes a leader from a dictator. Whereas dictators get others to do what they want by using threats of physical force, leaders do not. Subordinates accept influence from leaders because they respect, like, or admire them as well as because they hold positions of formal authority (that is, leaders may have both position power and personal power). We need to caution against the everyday practice of using tile terms leader and manager interchangeably.

The primary function of a leader is to create the essential purpose or mission of the organization and the strategy for attaining it.

In contrast, the job of the manager is to implement that vision. He or she is responsible for achieving that end, taking the steps necessary to turn the leader’s vision into reality. The confusion between these two terms is understandable insofar as the distinction between establishing a mission and implementing it is often blurred in practice. This is because many leaders, such as top corporate executives, are frequently called upon not only to create a vision, but also to help implement it.

Similarly, managers often are required to lead those who are subordinate to them while also carrying out their leader’s mission. With this in mind, it has been observed that too many so-called “leaders” get bogged down in the managerial aspects of their job, creating organizations that are “over managed and under lead. ” Leadership Perspectives Goal Attainment : influence function of leadership and deals the mechanisms that motivate members’ behaviors towards the group’s goals. Adaptation : helps the group to define its goal in a way that is consistent with the demands of the environment in which operates.

Integration : some mechanism must coordinate the activities of group members towards the common goal e. g – Communication and conflict resolution Maintenance : mechanism to maintain their morale and keep them interested in staying in the group THEORIES OF LEADERSHIP: There are three major approaches to leadership: a) trait theories, b) behavioral theories, c) situational theories. Trait theories highlight that there exists a finite set of individual traits or characteristics that distinguish successful from unsuccessful leaders.

Behavioral theories highlight that the most important aspect of leadership is not the traits of the leader, but what the leader does in various situations. Successful leaders are distinguished form unsuccessful leaders by their particular style of leadership. Situational theories outlines that the effectiveness of the leader is not only determined by his or her style of behavior, but also by the situation surrounding the leadership environment. Situational factors include the characteristics of the leader and the subordinates, the nature of the task and the structure of the group.

THE TRAIT APPROACH: ARE SOME PEOPLE REALLY “BORN LEADERS”? Common sense leads us to think that some people have more of “the right stuff’ than others, and are just naturally better leaders. And, if you look at some of the great leaders throughout history, such as Martin Luther King, Jr. , Alexander the Great, and Abraham Lincoln, to name just a few, it is clear that such individuals certainly have characteristics in common that differ from ordinary folks. The question is “what is it that makes great leaders so great? ”

Leadership Grid (Robert R. Blake & Jane Mouton) Impoverished Mgmt (1,1): Exertion of minimum efforts to get the required work done is appropriate to sustain organization membership. Country Club Mgmt (1,9): Thoughtful attention to the needs of people for satisfying relationships leads to a comfortable organizational atmosphere and work tempo. Middle Of The Road Mgmt (5,5): Adequate organizational performance is possible through balancing the necessity to get out work with maintaining morale of the people at satisfying level.

Authority Compliance (9,1): Efficiency in operational results from arranging conditions of work in such a way that human elements interfere to a minimum degree. Team Mgmt (9,9): Work accomplishment is from committed people; inter dependence through a common stake. In organization purpose leads to relationships of trust and respect. Managerial Grid: The five basic approaches to management identified by Black and Mouton are based on the two dimensions of concern of people and concern for production that are associated with leaders.

A managerial grid is formed based on these two dimensions which are rated on 9 point scale. If manager is securing the lowest score on these two dimensions I,I is identified as impoverished style of managers who are low on both their concern of people and production, 1,9 or country club style is designated to those managers who are having high concern for people but low concern for production. The 5, 5 or the middle-of-the road style concerns the moderate levels of concern for both people and production.

The 9,1 or task management style is one where there is a high concern for production but very little concern for people and finally, 9,9 or team management style is one where the manager has high concern for both people and production. According to Black and Mouton the one best style for all mangers is the 9,9 or team management style. Fiedler’s Model Effective groups depend on a proper match between a leader’s style of interacting with subordinates and the degree to which the situation gives control and influence to the leader. LEADER SITUATION MATCH A task oriented leader is appropriate for a very favorable or very unfavorable situation.

Relationship oriented behavior is predicted to work best when situation is moderately favorable or unfavorable. /* only read Favorable Situation: The situation is considered as highly favorable if it possess a high level of positive interpersonal relations between leaders and members, a well defined task structures and a leaders perceive that they are bestowed with strong perceived positional power. In such type of situation the leader will have a great deal of control over situations and will simply have to make sure that he gives the necessary instructions to get the task done.

There is no need for him to waste time talking to each employee in order to be perceived as friendly. A task-oriented style will be effective in such situation. Unfavorable Situation: The situation is considered as highly unfavorable if it possesses a low level of interpersonal relationship between leaders and members, a poorly defined task and a relatively a weak perceived power. The leader of a task-force committee which is appointed to solve problems encountered in the work setting is likely to find him in such a situation. In such type of situation, the leader is in highly vulnerable situations and there is no

other way to enforce a strict discipline and order to bring the situation in normalcy than following relationship oriented style. Moderately Favorable Situation: Here the leader might find herself in a mixed situation. For instance, a manager might have good relationship with her workers, but the task structure and position power of the leader may be low. For example, a bank officer may have a good relationship staff member, but the task structure or the power to control the staff members (either to reward or punish members) is not strong enough.

In such situations, the manager will be very successful and get the desirable results if he follows more of relationships oriented style than task oriented task style. */ PATH GOAL THEORY PATH GOAL THEORY believes that a leader can change subordinates expectancies by clarifying the path between the subordinates’ action and the outcome, which is the goal which the employee wants to achieve. Whether leader’s behavior can do so effectively also depends on situational factors. Path-Goal Leadership Model Path-Goal Leadership Behaviour

Directive Leadership Behavior: This deals with planning, organizing, controlling and coordinating of subordinates activities by the leader. It is similar to the traditional dimension of initiating structure in that the leader’s emphasis is on letting the subordinates know what is expected of them. Supportive Leadership Behavior: This concerns giving support consideration to the needs of the subordinates, displaying concern for their well-being and welfare and creating a friendly and pleasant environment.

Participative—a pattern in which the leader consults with subordinates, permitting them to participate in decision making. Achievement-oriented—an approach in which the leader sets challenging goals and seeks improvements in performance. The benefits to the company of the achievement-oriented leader approach include greater employee confidence and commitment, more employee decision making, increased employee creativity, more challenging objectives, and reduced supervision for employees who work best independently. SITUATIONAL FACTORS Employee Contingencies

When subordinates are in a team environment that offers great social support, the supportive leadership style becomes less necessary TRANSFORMATIONAL LEADERSHIP Definition: It’s the process of leading for change rather than for stability. Transformational leaders Leading — changing the organisation to fit the environment Develop, communicate, enact a vision. It is exercised when the leader intellectually stimulates the subordinates, excites, arouses and inspires them to perform far beyond what they would have thought themselves capable of.

A charismatic leader may be the whole show, whereas a transformational leader does a good job of inspiring change in the whole organization. Many celebrities, be they musicians, actors, or athletes, tend to be highly charismatic, but they do not necessarily have any transformational effects on their followers. As such, although some people may idolize certain rock stars, and dress like them, these celebrities’ charisma will unlikely stimulate their fans into making sacrifices that revitalize the world. When you think of it this way, its easy to see how charisma is just a part of transformational leadership. 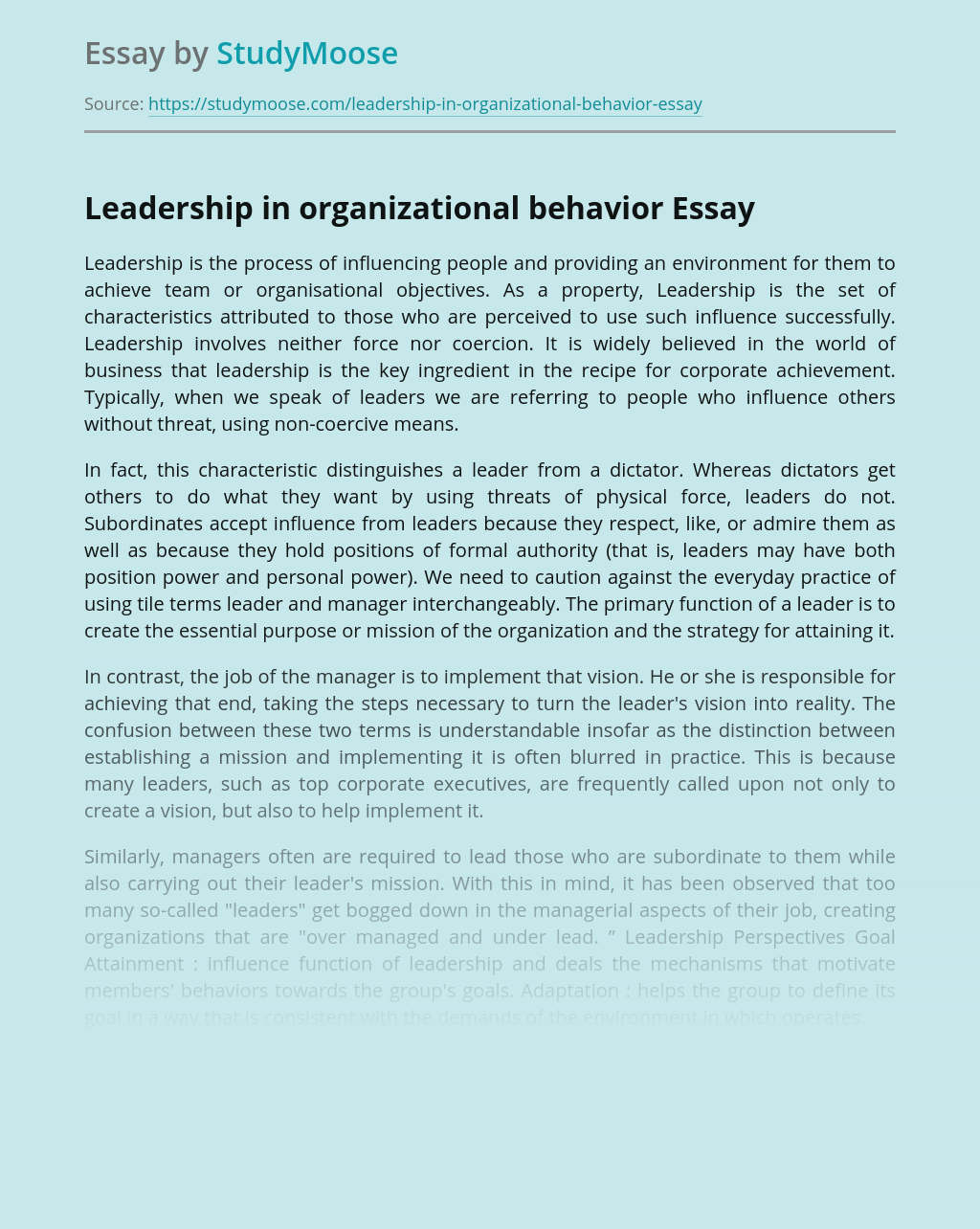 Turn in your highest-quality paper
Get a qualified writer to help you with
“ Leadership in organizational behavior ”
Get high-quality paper
Helping students since 2015
Stay Safe, Stay Original