Invictus is a film based on Nelson Mandela’s life during the 1995 Rugby World Cup in South Africa. The film tells the inspiring true story of how Nelson Mandela joined forces with the captain of South Africa’s rugby team to help unite their country. Morgan Freeman holding as a South African leader Nelson Mandela, whose recently been released from nearly 30 years of captivity in a tiny cell.

He was been elected and become his country president. He believes one way to achieve a reunite country and racial reconciliation is through the success of the national Springboks rugby team, which is captain by Francois Pienaar.

Don't use plagiarized sources. Get your custom essay on
“ Organizational Behavior Invictus ”
Get custom paper
NEW! smart matching with writer

South Africa is hosting the 1995 World Cup Rugby Event and the Springboks team automatically qualifies for that.

With help from Francois Pienaar, Mandela believes he can rally the entire country behind the team, especially if it does well in the tournament. This story portrays how this great leader manages and use his unexpected weapon to achieve his goals.

2.Issue and problem revealed in the movie.

i – Sport is universal for all races, perspective are able to change and healing is able to take place; Rugby was to the white South African as a source of both pride and humiliation. The green and gold strip jersey of the national team which is “The Springboks” was honored by fan. As newly elected leader, Nelson Mandela responsibilities to tackle the pain and dispute that had been caused and reconcile the nation. In a widely discouraged political moved, Mandela focused on gaining support for the very team that represented Apartheid.

It was Mandela that recognized the power of sport as a medium for political and social change as well become symbol of hope and reconciliation. In this movie it can realize that although the white and black people used sports as a tool through which to build community and have fun, the racial and social boundaries of Apartheid prevent them from integrating.

Nationalism is usually formed around literature and film, but it can also be formed around victories and loses. A sport isn’t just something men compete in to show off their muscles or how much talent they have. It’s a powerful tool that brings people together whether their realize it or not. Sports bring communities together. It is not just an individual watching and cheering a team on but a nation.

In this movie, Nelson Mandela sees the opportunity to turn the South African rugby team into so much more than a show of manliness and he turns them into a symbol of inspiration for a country and changes the entire meaning of the sport. He reunites his country and give them the hope they need in order to forgive past wrongdoing and come together as a nation through rugby. In this movie, President Mandela and rugby team captain Francois Pienaar work together to unite South Africa and all its races together through the sport of rugby. A sports game give people a common cause.

It gives them something to talk about, cheer and celebrate. They are cheering for one national team that represent everybody and every race. Through the victories and losses of the team, people unite. They have something to relate to that familiar to both parties and not just one race. They forgot what color everybody is and just focus on the team that represents their nation. This kind of solidarity can only be brought out by sports. Mandela capitalizes on this and uses the World Cup to bring about nationalism to a country on the brink of civil war. By the end of the movie, there are two different rugby teams.

One team represent a disconnected racist South Africa and the other represents a united country celebrating not just personal victory but a national as well. There is a scene where Mandela ask Francois about how do they will inspire the nation and everyone around them. The answer is leading by example. If Mandela cannot forgive his white prison guards, how he can expect his country to forgive and reconcile each other.

The same goes with the rugby team. The team is only able to connect and withstand when they go into the slums and meet with a group of black children and teach them how to play rugby. By personally teaching the children and showing them that the sport is universal for all races, perspective are able to change and healing is able to take place. ii – People have a life-long need for forgiveness, reconciliation and healing. Forgiveness being a way to not only change individual hearts but turn around a whole society.

In the film, Freeman as Nelson Mandella says to his head of security, “Forgiveness liberates the soul… that is why it is such a powerful weapon.” Forgiveness is not only liberates the individual soul but it can turn around the soul of a nation. It’s not a magic bullet that always and everywhere works but, it is a powerful force of the spirit that should be tried more often than it is. Forgiveness is hard work, requires a steely commitment to make reconciliation happen at the deepest and realistic levels, and filters down from a leader to the people. 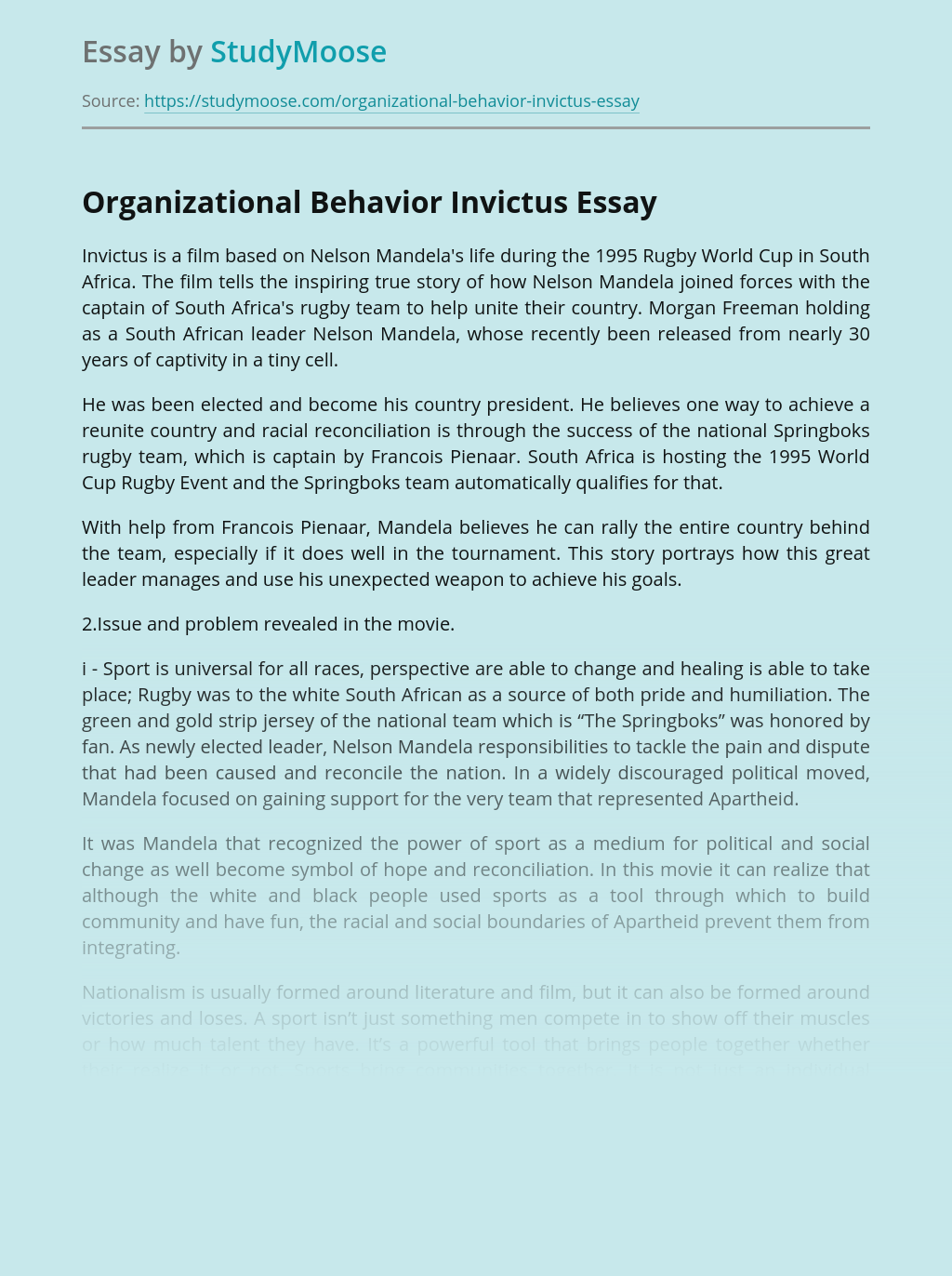