Introduction No one can ever sufficiently justify William Ernest Henry’s indescribably touching and heartbreaking poem “Invictus”. It would be prudent to remark how his sorrows in life paved a path for him to think beyond and maneuvered him to become a celebrated poet. In spite of his affliction from an early age he did not succumb to his disease. Henley’s Invictus is a gamut of infinite ideas shouting out about his placid disposition. Nevertheless, the readers have often encountered mixture of interpretations.

Turn in your highest-quality paper
Get a qualified writer to help you with
“ Interpretation of Invictus by William Ernest Henley ”
Get high-quality paper
NEW! AI matching with writer

Theme of the poem The poem is a reflection of Henley’s miserable life infected with crippling disease.

The mood of the poem is serious and welcomes the reader to interpret according to their understanding. “Finds, and shall find, me unafraid, Pit from pole to pole” are two examples of Alliteration where the poet has deliberately repeated the initial letters in the adjacent words. Poets use this technique to emphasize certain concepts and phrases. The last two lines of the poem are a clear example of Epigram that connotes either a larger than life concept or a sardonic statement.

The poem is everything but a portrayal of Dysphemism.

Authors and poets usually make a good use of dysphemism when they have to harshly criticize any concept. Interpretation of the Poem The title of the poem implies the poet’s commitment to confront adversity with utter might and determination. Invictus is a Latin word denoting the “unconquerable”. In the very first stanza, the poet endeavors to quote all the hardships and trouble in life metaphorically.

Now it is up to the reader’s understanding to assign pessimism and misery to the challenging hardships. In the very next line the poet attempts to confront the notion of abyss and darkness.

By the proverbial phrase “unconquerable soul” in the third and fourth line, Henley takes us back to the title of the poem, Invictus, which denotes the unconquerable. He dares to venture the reverence paid to soul that connotes invincibility, purity and separate from the physical being. In the second stanza Henley beholds the readers attention to encounter the predators of misery; opportunities and incidences. Although they both seem too abstract an idea to qualify as a statement in the given stanza but later in the next stanza, the ideas are widely solidified.

This can be illustrated through the words of the poet such as in the fell clutch of circumstance,” and, “I have not winced nor cried aloud”. The poem offers variety of perspectives to the reader to relate to the poem. However, understanding Henley’s perspective one needs to succumb to the idea of a hampered life. He succinctly expresses his sickness as almost invincible yet he does not yield to it. He stands tall and faces it with might and determination. Fate can cause no harm to a man who is already consumed with the thoughts of facing all the challenges vigorously.

“Not winced nor cried” exhibits epitome of bravery specially when a host of difficulties try to bring your morale down in the dumps. When the poet earnestly encompasses all the troubles he refuses to bow down before misfortune. This is an utter illustration of bravery lest anyone should marvel. The poet now exhibits a different disposition to encourage the reader to encounter his faith. The third stanza demonstrates the spiritual side where Henley talks about circumstances and chances. This world is a mere acknowledgement of two ideas; it either provides you with invincible situations in life or inculcates opportunities paving a path for you.

By the word ‘beyond’ the poet connotes faith in afterlife. Each and every word he uses implies insightful meaning to the poem. The phrase “horror of the shade” implies a meaning that may be equivocal to some poets. He refers to the threshold where the poor soul may be encumbered with great hardships. By the word menace he ventures to regard the concept of life after death where souls would stay in the shade for sometime. Henry disobediently embraces this as an unresolved ending and he victoriously confesses that he shall not be afraid at all when he meets his destiny.

The last stanza declares wide notions that have been critically acclaimed and celebrated since many years. In the last few lines, Henley concurrently accepts the challenge of finding the channel through which he can enter the gateway to eternity. However, many poets have criticized him for going astray and contradicting with Bible. Henry in the latter lines elucidates the concept of punishment that it doesn’t matter much as long as one is poised and controlled. The ending of the poem declares a victorious disposition. Henley is making the telling point that we are the masters of our life. Hence one should take bull by the horns.

Our decisions solely shape up our life, which leaves us with the charge of success and failures assigned to each decision we make. Despite of his adversity he wanted to control his life and become its master. Criticisms The poem offers wide notions and each notion and leaves the reader to interpret according to their understanding. However, many poets and critics falsely implicate Henley for proposing the concept of atheism and contradicting to Bible. Another criticism the poem faces is that by becoming the master of one’s fate is interference in God’s work. Conclusion The poem is a gamut of emotions widely expressed by the poet.

Each line of the poem takes the reader to a journey of thoughts. The poet reflects his take on life where he suggests to never succumb to diseases and hardships, they shall pass but one needs to be determined to face all the problems and worries with utter bravery. Take control of your life and change the fate’s design. This poem is an illustration of bravery even when one is physically impaired and every breath taken brings death closer to you. To remain poised in hard times is the key to success. Bibliography Henley, William. Poems by William Ernest Henley. 2nd Edition. London: Penguin Publisher, 2005. Print 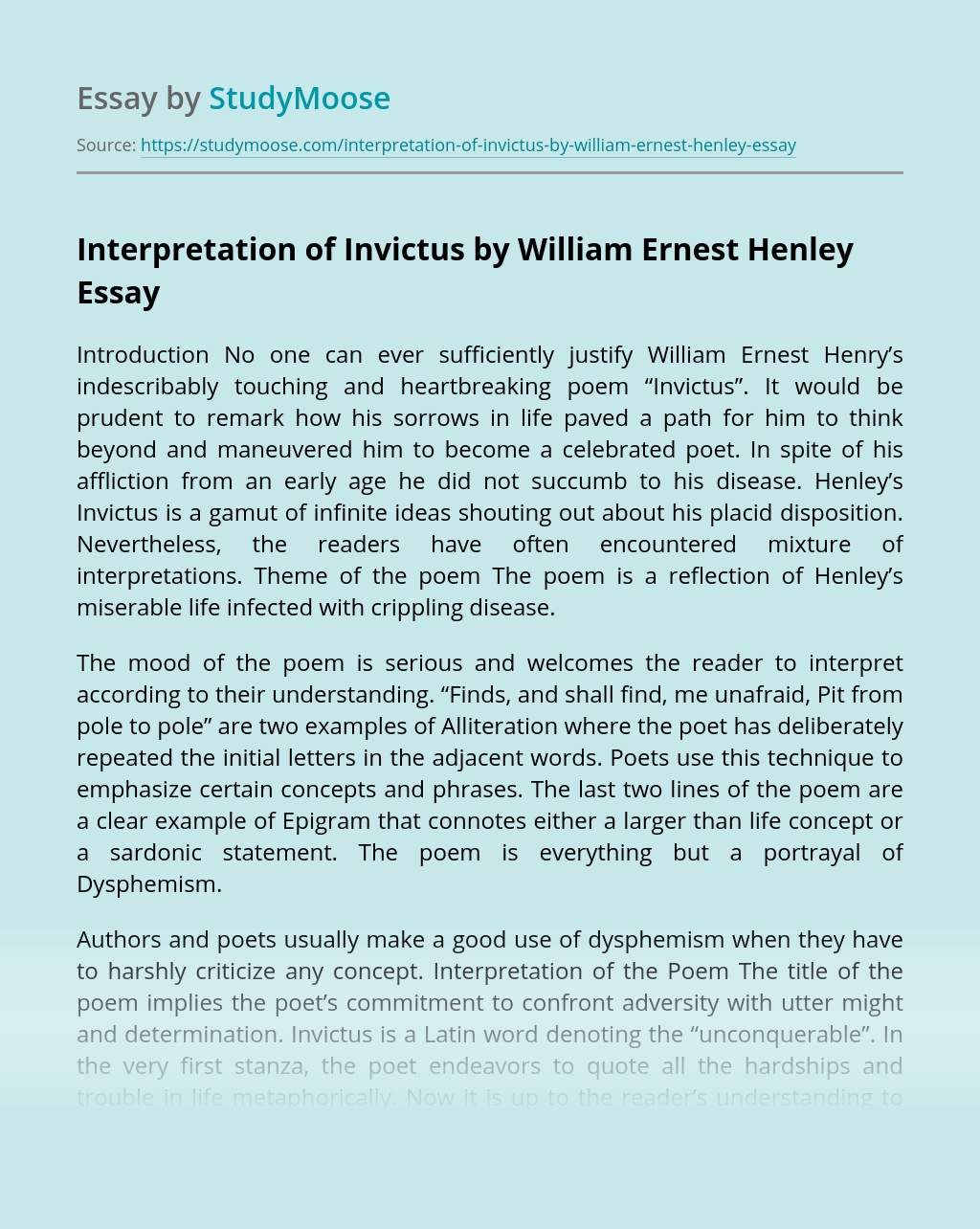 Turn in your highest-quality paper
Get a qualified writer to help you with
“ Interpretation of Invictus by William Ernest Henley ”
Get high-quality paper
Helping students since 2015
Stay Safe, Stay Original