“Invictus” by William E. Henley and “Anthem“ by Ayn Rand

The poem “Invictus” by William E. Henley, and the novel Anthem by Ayn Rand, both have common themes that discuss the importance of individuality in each society are forbid and belief of the unspeakable word ego and the word I should be eliminated from the vocabulary in a effort to eradicated the true “evil” are present as individualism.

One of the common themes between Rand’s novel, and Henley’s poem is that, both of the main characters of these pieces are determined to be nothing less than what they were made to be which is unconquerable.

Don't use plagiarized sources. Get your custom essay on
“ “Invictus” by William E. Henley and “Anthem“ by Ayn Rand ”
Get custom paper
NEW! smart matching with writer

A quote from Anthem that supports this theme is, “They (the Golden one) looked strait into our Equality 7-2521 eyes and they held our head high and they answered: “the unconquered.”(p.56). From this quote, the Golden one proves to think that Equality 7-2521 is an unconquerable being, because of this determination, as well as will-power with all his doings. In Invictus, the protagonist does not see himself to be overcome by anything, but to always be able to rise against his challengers.

As the author states in Invictus , we thank whatever gods may be for my unconquerable soul. The leading character explains in this quote how he is invincible, and that this gift was given to him, so therefore it cannot be taken away. I can relate this to Anthem , by recapping what happened to Equality 7-2521in his past experiences with the transgressor got burned alive, which made him steadily directed and immovable, such as in “Invictus”.

Also, in both Anthem and “Invictus”, the protagonists of the story and poem, went through physical pain, which I also believe has a lot of emotional pain involved as well. In Anthem Equality 7-2521 states this excerpt, “They tore our clothes from our body, they threw us down upon our knees and they tied our hands to the iron post. The first blow of the lash felt as if our spine had been cut in two.” (p.64). From this quote we can gather that Equality 7-2521 had physical pain from the lashes, but also emotional pain behind the reasoning of the abuse.

I believe that this had a hug Individuality, this word is what makes a person who they are. It can be molded into whatever one chooses it to be. It also puts you in control of yourself and guides you through your existence. Being individualized is what makes us human. We are not all the same. In the novel Anthem, the thought of individuality is a constant theme throughout the book. The main character, Equality believes he is cursed by being an individual, at first. Many similarities can be found between the novel Anthem and the poem “Invictus.

These two quotes alone depict individuality very well and are similar in the message in ANTHEM AND THE POAM INVICTUS. Towards the end of the novel I think that Equality will tell the reader of how he will no longer live for anyone but himself and those that he loves and love him. “It is my mind which thinks, and the judgment of my mind is the only searchlight that can find the truth. It is my will which chooses, and the choice of my will is the only edict I must respect.” “I ask none to live for me, nor do I live for any others.” These quotes are very similar to the last two line of “Invictus.” They read “I am the master of my fate; I am the captain of my soul. 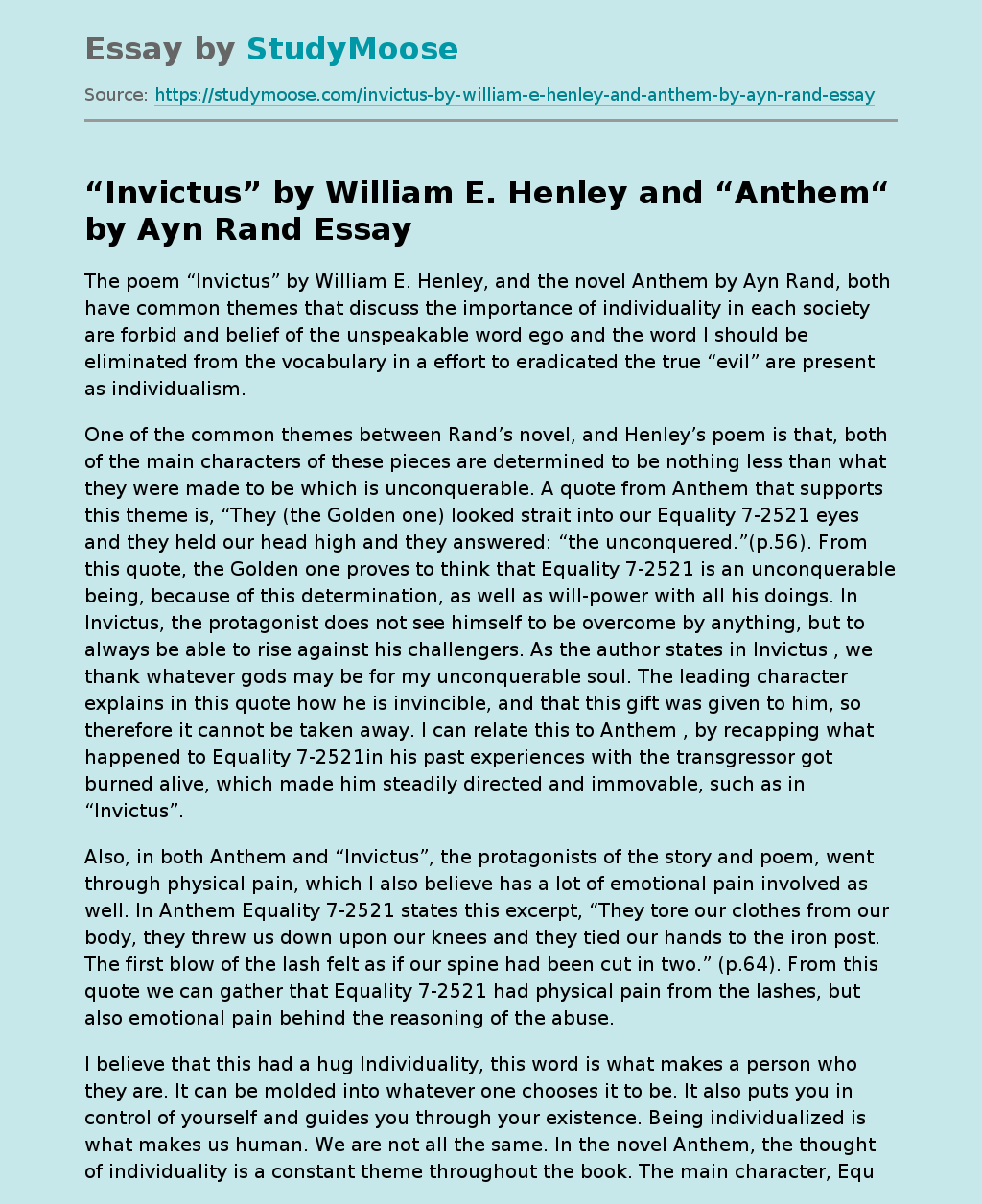