Leadership lessons from the movie “Invictus”

Invictus is a biographical film based on the book Playing the Enemy: Nelson Mandela and the Game That Made a Nation. The story of the film revolves around Nelson Mandela’s efforts and strategy to unite the South African society that is torn apart by apartheid. Upon being elected as the first black President of the nation amidst severe opposition from the whites, Mandela faced an enormous challenge to reconcile the nation and build a democracy in the country devoid of racism.

Turn in your highest-quality paper
Get a qualified writer to help you with
“ Leadership lessons from the movie “Invictus” ”
Get high-quality paper
NEW! AI matching with writers

The 1995 Rugby World Cup hosted by South Africa became an unlikely opportunity for Mandela to restore harmony in the country.

The blacks in South Africa despised the Springboks, South Africa’s rugby team as it was a symbol of white oppression. Only the whites supported the Springboks, whereas the blacks always supported the opposition team. By inspiring Francois Pienaar, the captain of the poor-performing Springboks to win the World Cup, Mandela was successful in inching towards his goal of racial harmony in the country. Invictus serves as a good lesson on leadership by portraying two characters, Nelson Mandela and Francois Pienaar as successful leaders, however, with different leadership styles.

Nelson Mandela exemplifies transformational leadership. His ultimate goal of reuniting a nation torn by racial discrimination was a major transformation that would change the face of the nation globally. He shaped a strategic vision of a realistic and attractive future of the nation and was very efficient in communicating his vision since the beginning of his mandate. On his first day as the President, Mandela observed that all employees of the previous government were leaving their jobs.

He organized a meeting with them to communicate his vision and encourage them to stay back if they shared his goal. When his black security guards were unhappy about being forced to work with white counterparts, he informed them about his goal of a racially united country and persuaded them to work together as a single unit.

Mandela set up a perfect example of modeling his vision by incorporating both blacks and whites in his personal security unit. He not only spoke about his vision but also enacted upon it; this is a perfect example of “walk the talk”. He believed that the nation would trust him if they saw consistency in his words and actions. A transformational leader tends to face several external and internal challenges on the path towards his goal. Self-confidence, strong conviction in the vision and commitment to lead from values help face these challenges. These qualities were a significant part of Mandela’s leadership style. Despite facing resistance from his black security guards, he changed the ethnic representation of his personal bodyguards to teach them racial harmony. This proved to be a right move because by the end of the movie both the black and white bodyguards worked efficiently as a single unit and supported the Springboks together. Mandela strongly believed in the virtue of forgiveness and pardoning the whites for their past behavior.

He demonstrated this himself and persuades his people to also forgive the whites. Despite a consensus amongst blacks to change the name and emblem of Springboks as a revenge for years of oppression by the white population, Mandela persuaded the committee to forgive the whites, reconsider their decision and re-vote. On receiving minimal support, Mandela decided to retain the Springboks ensuring that the whites were not punished for the past (example of participative leadership). Being aware that his decision would make his supporters unhappy, he stood by his decision because he believed in leading from values. An effective leader would strive to incorporate principles into people’s passion. Mandela exhibited both people-oriented and task-oriented leadership. His warmth, mutual trust, respect, appreciation and gratitude for his subordinates impressed Francois. In a rugby match, Mandela personally interacted with some of the viewers at the game.

During their first meeting, Mandela appreciated Francois’s job as captain of Springboks and acknowledged the challenges as a captain of a national team. Mandela also demonstrated a high level of emotional intelligence and created a positive work environment which made him earn trust, respect and love from his employees. He made an effort to strike a personal chord with his subordinates. For instance Mandela quietly memorized the names of each of the Springboks players so he can give them each a personal greeting. Mandela was an excellent motivator. This is visible when he inspired Francois to win the World Cup.

Towards the end of their meeting, it seemed like Francois realized a significant change in his outlook and shared Mandela’s vision about the importance and meaning of a Springboks win to South Africa. Mandela believed in leading by example and by inspiration from the work of others. He found motivation and drive to excel from the Victorian poem ‘Invictus’. Mandela’s philosophy of leadership was to inspire others not only to be their best, but to become even better than they thought they could.

Francois Pienaar is another character in the role of a leader. He was the captain of the underperforming Springboks. Francois exemplifies transactional leadership. His role was to motivate and inspire the team to deliver their best performance and regain the confidence of the country in his team. His leadership ideology was leading others by example to improve team performance. In one scene when the team was exhausted after extensive physical training, Francois was the first one to continue exercising despite the fatigue, hence inspiring his team-mates not to give up. After his meeting with Mandela, Francois was motivated to win the World Cup and believed in Mandela’s vision about the importance and meaning of a Springboks win to South Africa. Despite encountering initial opposition from his own team-mates, Francois had confidence in his vision and persuaded his team-mates to provide rugby training to poor black kids.

His confidence and faith in the vision was too strong to be affected by his family’s dislike for Mandela. Francois came across more as a task-oriented and achievement-oriented leader than a people-oriented leader. Depending on the situation, Francois slightly altered his leadership style. He was an autocratic leader when he directed his unwilling team mates to provide training to the black kids. In another scene, when his team mates were least interested in learning the national anthem, he did not use force but persuaded them to sing it meaningfully by explaining what it meant. The team’s visit to Robben Island, where Mandela was jailed, boosted Francois’s inspiration and belief in the poem ‘Invictus’. In the end, Francois proved to be a successful and efficient leader when the Springboks won the Rugby World Cup.

Leadership lessons from the movie “Invictus”. (2016, Apr 11). Retrieved from http://studymoose.com/leadership-lessons-from-the-movie-invictus-essay 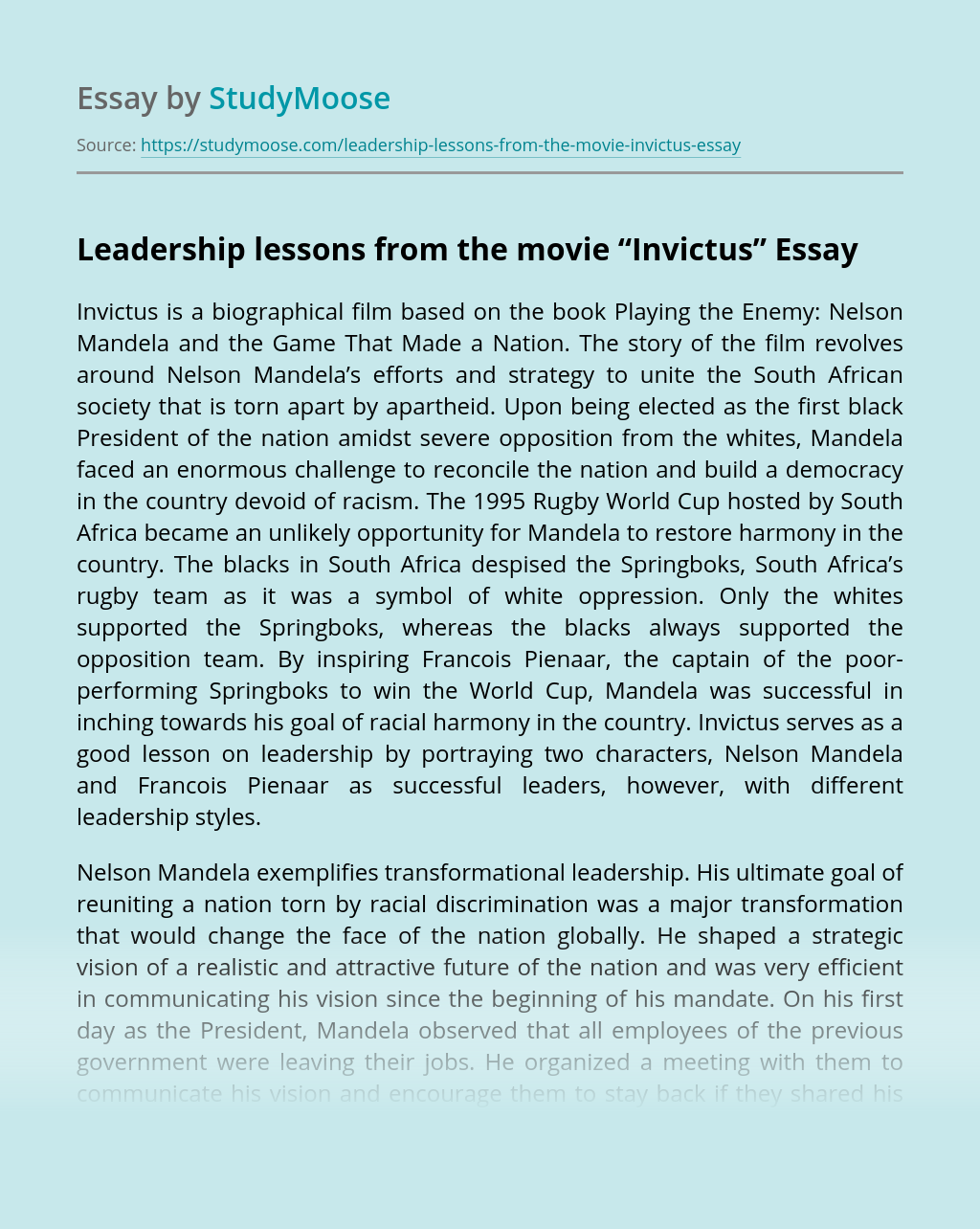 Turn in your highest-quality paper
Get a qualified writer to help you with
“ Leadership lessons from the movie “Invictus” ”
Get high-quality paper
Helping students since 2015
Stay Safe, Stay Original