Human fate, whether predetermined or not, has always been a subject of great debate. Numerous inconclusive arguments have erupted from scientific as well as religious perspectives as to whether or not destiny is controlled by an outside force. Author William Ernest Henley’s poem “Invictus” is frequently regarded as an eye opening piece of literature that has imitated and facilitated the self reinvention of countless lives. Challenging Christian ideals, Henley elicits a powerful emotional response by supporting the philosophy that man is the sole determinant of his fate.

Turn in your highest-quality paper
Get a qualified writer to help you with
“ Poem “Invictus” by William Ernest Henley ”
Get high-quality paper
NEW! AI matching with writer

By presenting such a bold and controversial belief, Henley greatly increases the impact of his poem. He titled the poem “Invictus,” Latin for unbeaten, in order to show that although his spirits were low and mind deterred, they still remained unconquered, demonstrating the retention of control he had over his destiny [Invictus (Meaning of)].

The Christian faith is well known for its belief of having one god who watches over and guides all.

Henley begins the poem by thanking “whatever gods may be” for providing him with his “unconquerable soul.” Henley purposefully uses the term “gods” as a passive aggressive challenge to this fundamental Christian belief in monotheism. He also states that his head has remained “unbowed,” referencing his refusal to submit when times are hard. The “bludgeonings” that have beat Henley down most surely represents his hardships, while the bowing down represents submission to Christian ideology and to God himself. His refusal to surrender himself to these ideals is representative of his belief that no one but himself can change or affect where he is in life.

In a further defiance of Christianity, Henley says “It matters not how strait the gate, how charged with punishments the scroll.” The gate is supposed to be the very same one that leads to Heaven, strait referring to the narrow passage that allows for very little admittance. Meanwhile, the punishments on the scroll reference the metaphorical list of sins that belabor the human soul, challenging the general concept of sin. By invalidating the scale of right and wrong upon which Christianity is so heavily based, Henley attacks the validity of the entire Christian faith. This assault continues in the poem with the lines “I am the master of my fate: I am the captain of my soul.” The theme of self reliance presented in these lines reinstates Henley’s belief that each person is the only one accountable for their journey, not God or any other omnipresent being.

Henley was a strong willed individual that chose to look past his negative experiences in life and continue his journey of personal discovery and self definition. Henley was not the first to come to the belief that man was exclusively responsible for shaping his own destiny. An ancient Korean philosophical idea known as Juche shares this same belief (CITATION). “The circumstances of one’s birth are irrelevant; it is what you do with the gift of life that determines who you are” (Mewtwo). It doesn’t matter where a person’s life begins, it doesn’t matter what that person has been told, in the end, everyone’s soul is their own, and only they are responsible for their fate. 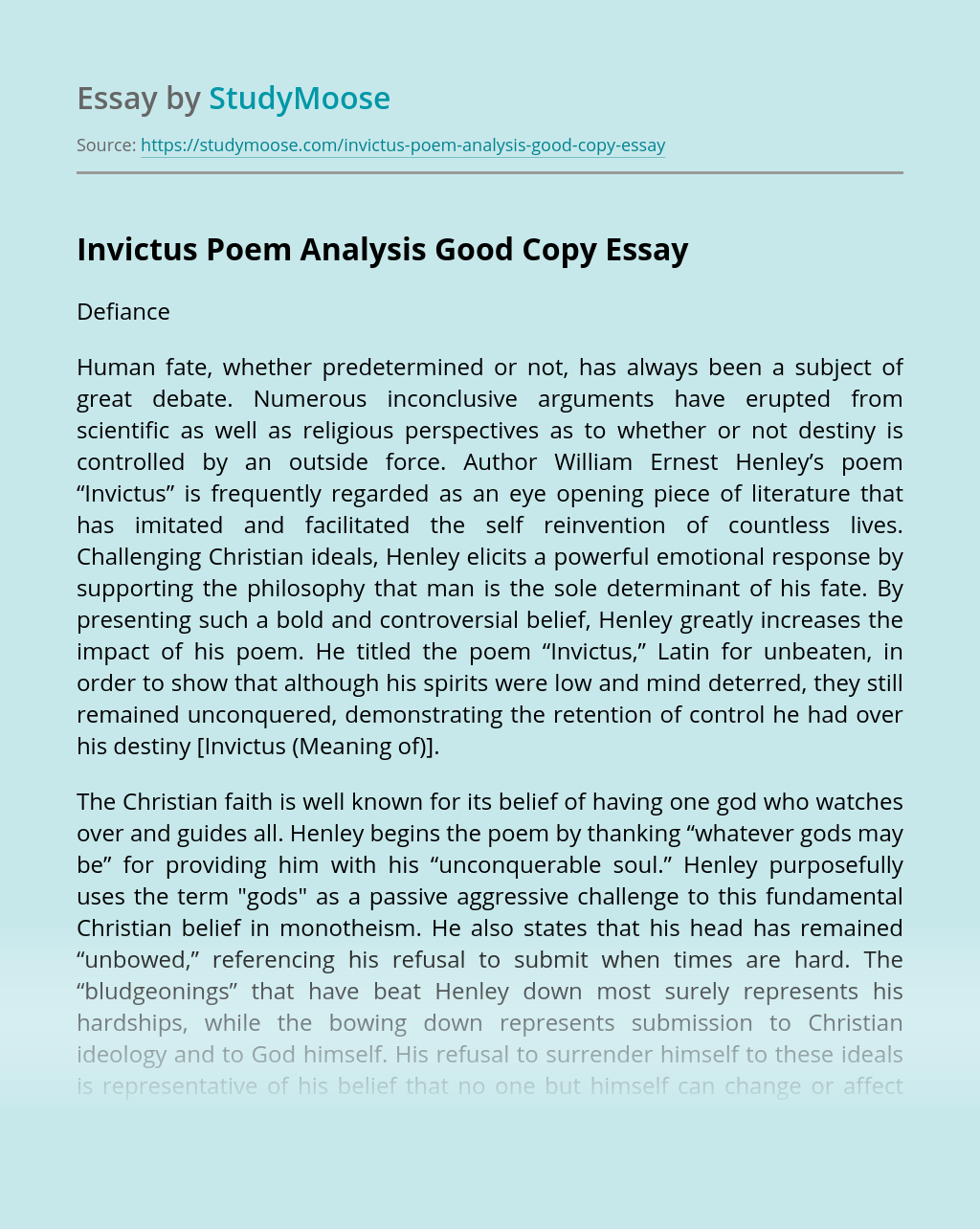 Turn in your highest-quality paper
Get a qualified writer to help you with
“ Poem “Invictus” by William Ernest Henley ”
Get high-quality paper
Helping students since 2015
Stay Safe, Stay Original