The short story, “Life After High School” by Joyce Carol Oates, is set in the small town of South Lebanon, New York in 1959. The first three quarters of the story is the tragic tale of one-sided love where Zachary Graff, the intelligent but socially awkward teenager falls in love with Sunny Burhman, the attractive and popular girl that everyone adores. She rejects his proposal and he can’t take it and decides to take his own life. Later, we find out his real love was Tobias, his one friend.

Don't use plagiarized sources. Get your custom essay on
“ Literary Analysis “Life After High School” ”
Get custom paper
NEW! smart matching with writer

His love for Sunny was his last way to fit in with the norms of society. Oates shows us the intertwined lives of three high school students and the paths taken to free themselves of the entrapment of their uncomfortable 1950s conventional lifestyles.

Barbara “Sunny” Burhman is known as the popular too good to be true Christian girl in the story. She was everything the perfect, all American 1950’s girl was supposed to be.

In the beginning of the story she is referred to as ‘Sunny’ because her 6th grade teacher suggested calling her this because of her sunny personality. “Tell you what, boys and girls – let’s call Barbara ‘Sunny’ from now on – that’s what she is” (Oates 512). Sunny’s freedom came by Zachary taking his own life. “The irony had not escaped Barbara Burhman that, in casting away his young life so recklessly, Zachary Graff had freed her for hers” (Oates 518). She drops the name Sunny and just goes by Barbara Burhman.

When she goes off to school she excels in college and solely works on academics. She drops all the “Sunny” aspects of her life that trapped her and she became a prestigious teacher and author.

There was no place for an agnostic gay male like Tobias Shanks in a 1950’s small town high school and he is forced to lead his life in secrecy. After Zachary’s death Tobias Shank’s secret is safe from his fellow high school students. Tobias, like Barbara, changes his name after high school and goes by T.R. Shanks. Unlike Barbara, the author doesn’t let us know Tobias’ exact point of his freedom from the restrictions of the 50’s lifestyle, but it does come. It possibly comes after the changing times of the 60’s and 70’s. T.R. is able to come out and find his place in the world as a gay man. He goes on to become a successful playwright and director winning many awards

Oates leads us to believe that in the beginning of the story Zachary is a typical awkward intellectual that falls in love with the perfect girl in his high school. In reality, his true love is his one friend Tobias, but the constraints of the 1950’s lifestyle led Zachary to believe that Sunny was his perfect choice. Up until death Zachary was conflicted. When both Sunny and Tobias reject him, death seems his only way to freedom. Oates gives some additional insight about Zachary’s thoughts by telling the reader the contents of his car after his suicide. The author, by her quirky ending, left it up to the reader to decide that Zachary may have contemplated other scenarios that possibly wouldn’t have been appropriate with the 50’s perfect life style. In Zachary’s suicide note he takes responsibility and releases all parties of any guilt. This suggests that he did feel constrained by the 50’s lifestyle to the very end.

Oates writes a story about three high school students of the 1950’s that students of today can empathize with. Although there still may be other issues of acceptance, the time period in which the story is placed was an especially conservative time. Suicide, homosexuality, and women playing important roles in society outside the home were not part of the social norm of the 50’s. Today these issues are much more accepted. Oates shows us the intertwined lives of three students and the paths taken to free themselves of the entrapment of their uncomfortable 1950s conventional lifestyles. 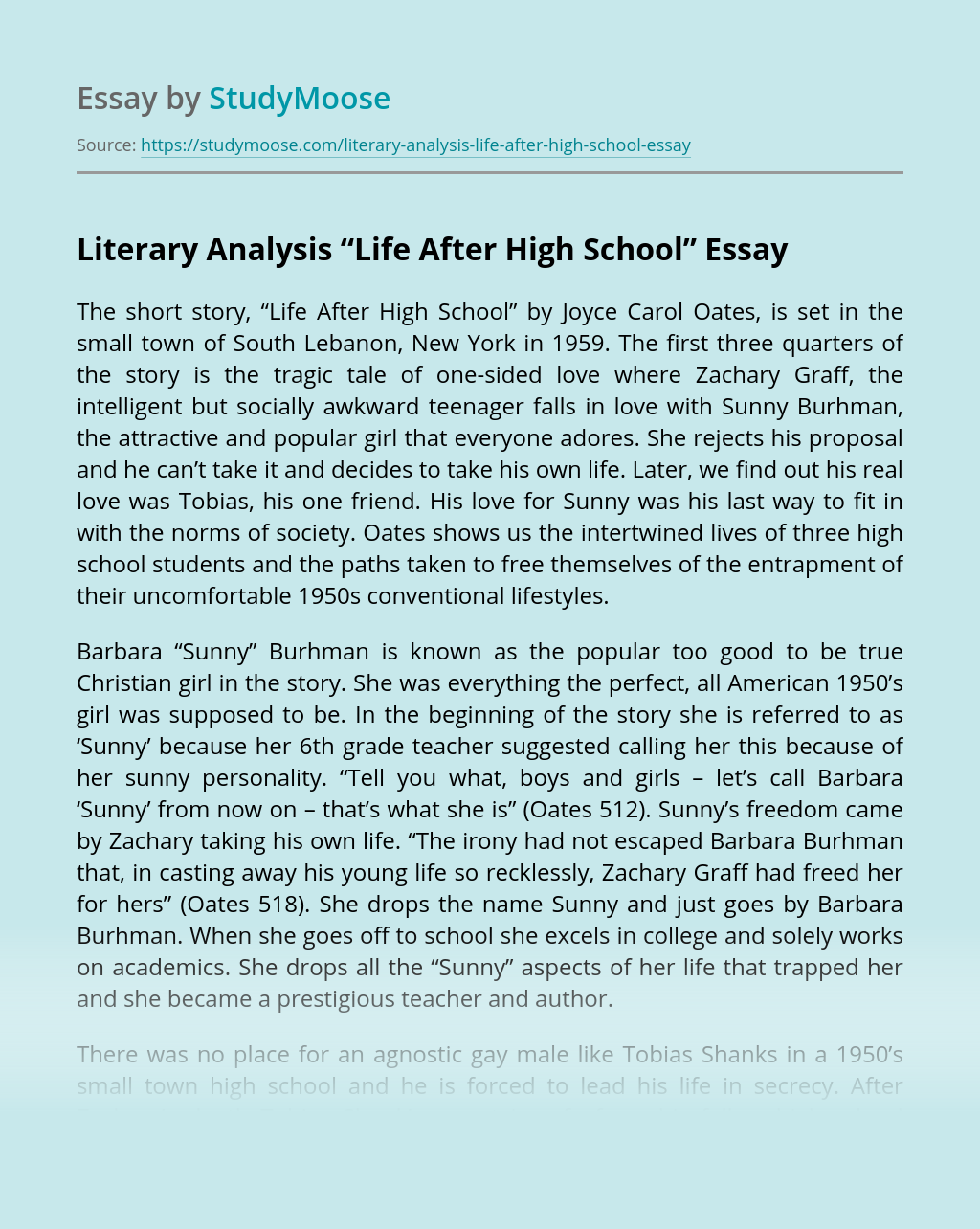