Planet Earth is the only known astronomical object that is known to harbor life. A thin layer comprising of a mixture of gases, called Atmosphere, is what makes life on earth possible. It is mainly composed of nitrogen and oxygen. The atmosphere is held around the planet by the force of gravity. It acts like a blanket surrounding our planet and protecting life on it by absorbing harmful ultraviolet rays, allowing liquid water to exist and keeping the surface temperature balanced.

Don't use plagiarized sources. Get your custom essay on
“ Planet Earth is the only known astronomical object that is known to ”
Get custom paper
NEW! smart matching with writer

The atmosphere is divided into five layers namely troposphere, stratosphere, mesosphere, thermosphere and exosphere. Each layer has its own specific traits but the one that I’ll mainly be discussing is the Ozone layer, which is present in the region of stratosphere. It sits roughly 15 to 30 kilometers above the earth’s surface. This layer is made up of high concentrations of the ozone gas and helps protect our planet from harmful ultraviolet radiation. Around the 1970s, it was discovered by scientists that the ozonosphere had been depleting.

This caught the attention of other scientists and after some more research it was found that emission of chlorofluorocarbons (CFCs) was the major cause of this occurrence. Gases such as HFC’s and CFC’s cause a chemical reaction that harms the ozone molecules by breaking them down and reducing their ability to absorb the harmful ultraviolet radiation that ultimately affects plant and human life on earth.

It was then seen as one of the gravest problems faced by our planet. If the toxic gases continued to weaken the fragile ozone layer, it would lead to causing cancer, affecting eyesight and induce extreme temperature changes.

“Ozone hole” is the term used to define this depletion of this protective blanket over Earth’s polar regions. Thus, scientists were very concerned to find measures to curb this problem and it became a widely discussed environmental phenomenon. This accumulation of toxic gases has caused it to thin down and even form a hole due to its drop in concentration.

This is what led to the design of an international treaty called, ‘ The Montreal Protocol on Substances that Deplete the Ozone Layer’ that protected damage to the ozone layer by phasing out production of various substances that caused its depletion. It was agreed upon on the 26 August 1987 and came to force on the same date of the year 1989. United States and 45 other countries signed this treaty, pledging to help mitigate carbon emissions.

Since this treaty was widely adopted and implemented, it is used as an example of remarkable international co-operation. Erik Solheim, head of the UN Environment, described the Montreal Protocol as “one of the most successful multilateral agreements in history.” (3, Lianne) Since dramatic steps were taken to curb this issue, climate projections infer that the layer will fully heal by 2050, some notable difference is already prevalent since the implementation of this treaty. The objective is to completely eliminate the production of hydrofluorocarbons and chlorofluorocarbons, (mainly used in refrigerators and transporting vehicles) thus protects plants, climate change and humans from disease. NASA’s Paul Newman, Joint Chairman of the report, said “Two thirds of the ozone would have been destroyed by 2065 had the measures not been implemented.” (3, Lianne)

Most recently, a study by a group of geographers at National University of Singapore has discovered that mangroves and other coastal vegetation like salt marshes and seagrasses can help mitigate carbon emissions. Restoration of blue carbon ecosystems can help nations achieve the goal of all nations becoming carbon neutral. Mangroves are said to store carbon much more effectively than other tropical ecosystems. They “grow fast and have the ability to accumulate organic carbon in water saturated soil that surrounds it.” (4, NUS)

Even though ozone depletion does not directly cause global warming, they are both very closely related. The pivotal cause of global warming and extreme climatic conditions is too much carbon dioxide into the air. This is mainly due to burning of natural gas and other coal. The carbon dioxide forms a harmful envelope around the planet trapping heat, therefore causing extreme temperature changes. Although the United Nations along many countries have signed the treaty and implemented laws to completely cut down emissions that cause this deterioration of the Ozone, there are a few things; we can do on an individual level to reduce our contribution to this depletion. These would help prevent the current scenario from getting worse. Firstly, one must invest in energy efficient appliances such as eco-friendly, fluorescent bulbs. Secondly, instead of mass deforestation, one must plant as many trees as one can, and encourage others to do so. Trees help in absorbing the harmful UV rays and also helps keeping the air clean. Thirdly, avoid using synthetic chemicals like pesticides, use organic manure instead. Fourth, avoid using vehicles to places where one can easily walk, carpool or even use public transport to. Along with this, its important to have your vehicles, refrigerators and air condition’s pollution check. Usually, old devices tend to emit more harmful gases. Even small habits like always turning the lights off or unplugging appliances when not in use, go a long way into contributing to the environments betterment. Lastly, it is very important to make people aware of current natural situation and the dire need for public co-operation is being eco-friendly. Students must be taught to make “greener” and wiser choices, it has to be instilled in them while they’re young.

I believe that the possibilities of the human brain are endless. And the amount we have achieved over the past few decades is commendable. But doing so, at the cost of our environment and nature is foolish. All the knowledge, technological advancement and the wealth we can together achieved is of no good if we can’t respect and understand the importance of taking care of our surroundings; our natural resources- flora and fauna.

We must come together, as a human race, people of all countries, sexes, races, colors and all languages, must keep personal interests aside and contribute to making this world a better place to live in for the future generations. Natural resources like air, water, soil, they don’t have boundaries. They belong to anyone and everyone. We all have a complete right and responsibility towards them. Everything mother earth has to offer us is free. And taking it all for granted, comes with a grave cost. We are in urgent need of transcending boundaries and finding solutions, which together, we can. After all, it’s the only planet that supports life.

Planet Earth is the only known astronomical object that is known to. (2019, Dec 08). Retrieved from https://studymoose.com/planet-earth-is-the-only-known-astronomical-object-that-is-known-to-example-essay 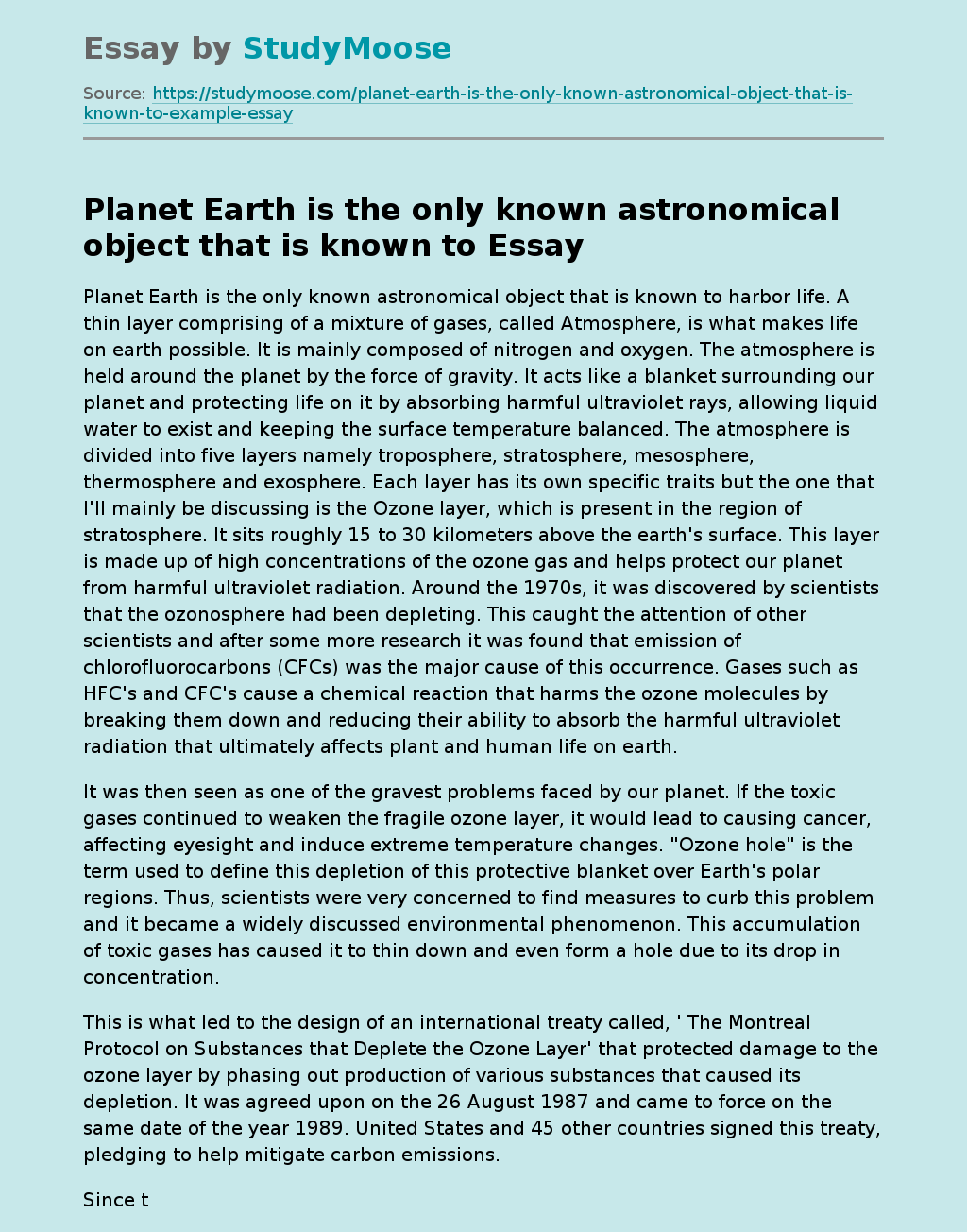