Money as an object of gift-giving

“Money, medium of market exchange par excellence, should not be the object of gift-giving.”

Money performs at least two distinct functions of high importance: acting as a medium of exchange and a common measure of value. Being accustomed to exchange things frequently for sums of money, people learn the value of other articles in terms of money, so that all exchanges will most readily be calculated and adjusted by comparison of the money values of the things exchanged. However, it would be wrong to consider money as only serving commercial exchange.

Don't use plagiarized sources. Get your custom essay on
“ Money as an object of gift-giving ”
Get custom paper
NEW! smart matching with writer

As we might already know from non-western societies, there are some transactions involving money, e.g. bride wealth or blood wealth, where in these cases money is serving as a mean of payment and not of purchase, and also that money is a substitute rather than an equivalent.

Hart (2005) argued that relations marked by the absence of money are the model of personal integration and free association, of what we take to be familiar, the inside.

But, on the other hand money as we all know is acknowledged as a par excellence for exchange. In that sense money might as well serve as an object involved in gift-giving, because then it is considered useful for the receiver later on, since they might sooner or later use it as a form of exchange. Besides, money allows avoiding the exchange of objects of the same nature, which conforms to the principle of reciprocity in gift-giving.

In Chinese and other Asian societies, a red envelope or red packet is a monetary gift which is given during holidays or special occasions.

Red envelopes are mainly presented at social and family gatherings such as weddings or on holidays such as the Lunar New Year. Malay Muslims in Malaysia, Brunei, Indonesia, and Singapore have adapted the Chinese custom of handing out monetary gifts in envelopes as part of their Eid al-Fitr celebrations, but instead of red packets, green envelopes are used, as green represents the colour of Muslim. The adaptation is based on the Muslim custom of sadaqah, or voluntary charity. While present in the Qur’an, sadaqah is much less formally established than the sometimes similar
practice of zakat, and in many cultures this takes a form closer to gift-giving and generosity among friends than charity in the strict sense.

Nowadays, in western modern societies, it is quite common to use money as an object of gift-giving. A gift card is a restricted monetary equivalent or scrip that is issued by retailers or banks to be used as an alternative to a non-monetary gift. Gift cards have become increasingly popular as they relieve the donor of selecting a specific gift. Though people still think that giving a gift card indicates that the giver is lazy and not creative, but still it’s rated as the second-most given gift by consumers in the United States (2006) and the most-wanted gift by women, and the third-most wanted gift by men.

So, based on the explanation and examples given above, I would like to argue that money, as a medium of market exchange par excellence, might as well serve as an object of gift-giving.

Money as an object of gift-giving. (2020, Jun 02). Retrieved from http://studymoose.com/money-as-an-object-of-gift-giving-new-essay 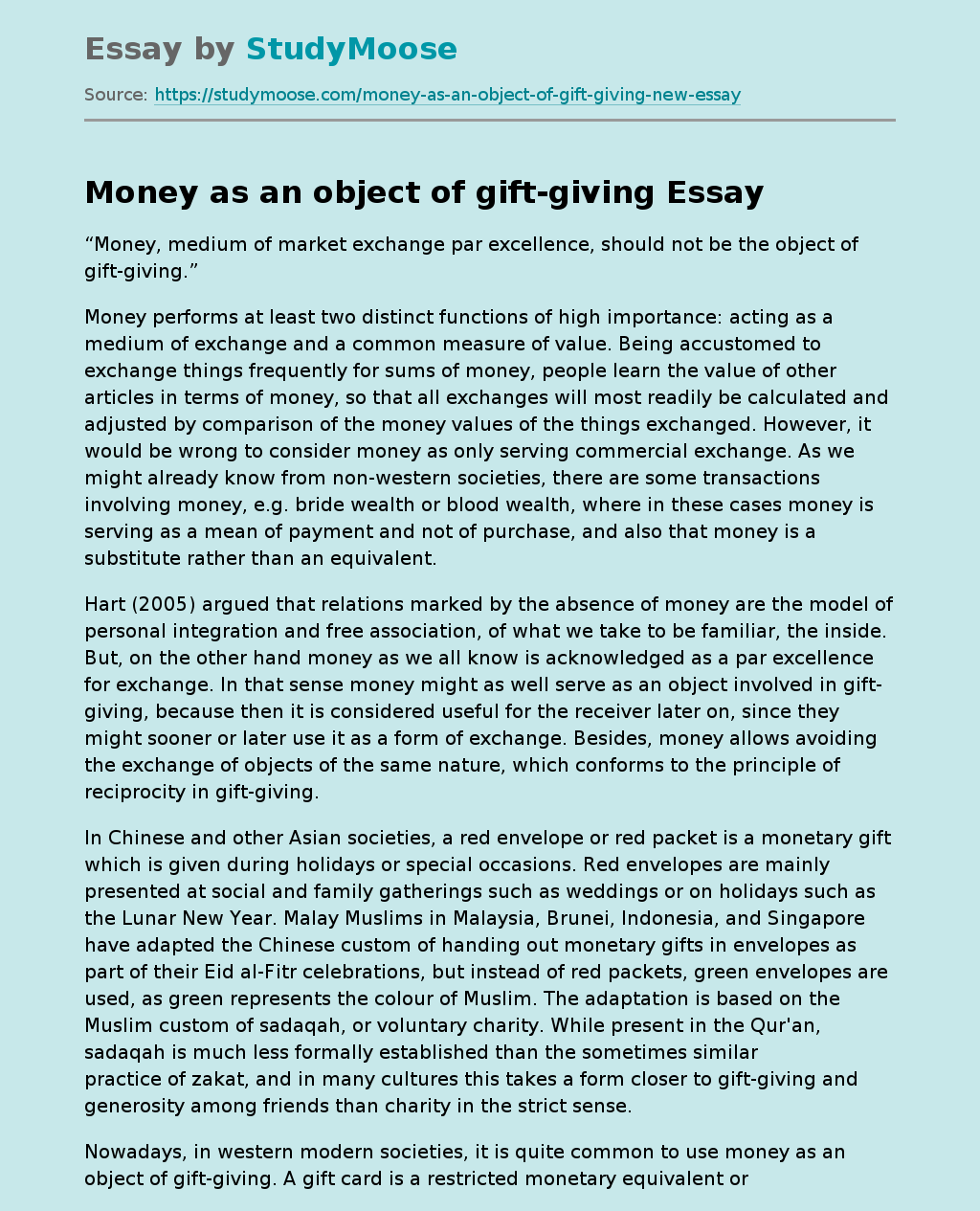