Running for four seasons, the Animal Planet documentary show Meerkat Manor captured the attention of viewers all over the world. This was often credited to its then-unique form of documentary: the animals lives were romanticized with an ongoing narration that included recurring foes, colorful names, and a bevy of life or death situations for the Whisker family.

However, embedded in the very nature of its success is the tragedy inherent in Meekat Manor: the fact that many viewers show little sympathy or empathy towards these animals until they are anthropomorphized and represented more like human beings.

Don't use plagiarized sources. Get your custom essay on
“ Animal Planet documentary ”
Get custom paper
NEW! smart matching with writer

In turn, the show’s creators increase ratings by filming dire circumstances with a kind of Prime Directive to not interfere. In fact, the very first episode leaves readers wondering whether the injured Shakespeare, who had previously rescued fellow meerkat Mitch, will be able to make his way home alone.

While it makes for great television, it is apparent that the producers wish to have their cake and eat it too: they want to follow the intimate details of the lives of the animals and give them colorful names like “Rocket Dog” and “Shakespeare,” and also wish to play the traditional role of the aloof documentarian.

The result? The injection of human drama into an animal documentary through rampant anthropomorphized filmmaking, which highlights how little many of the viewers care when they cannot see themselves in the plight of the animals.

For animal lovers, perhaps the most distressing element of Meerkat Manor is the blunt truth that the meerkats are not actually the focus of the show, despite the name.

Rather, as Jo Anne Young points out, “The viewer recognizes and recalls and in taking such an active role the viewer becomes the most important part of the exchange” (22). She notes the role of the camera in effectively creating distance for viewers: “In this context, the scope, like a camera, regulates the relationship of spectator and image.

The scope is used to bridge geographic distance and the limits of the human eye but accentuates the eye’s tendency to fragment, objectify and estrange, creating separation” (22). This is the paradox of Meekat Manor alluded to above: at the same time that viewers have, ostensibly, great control over the nature of their own voyeuristic nature (frightened audiences can always change the channel when their favorite animal is in peril), Animal Planet goes to great length to make the meerkats more than just abstract creatures: they are, instead, reflections of humanity.

This is necessary for viewers, and sometimes even poignant; commenting on viewer’s responses to the deaths of two fan-favorite meerkats (Flower and Mozart), James Poniewozik noted that The need to find–or create–order, arc and purpose in life and death is the root of art and religion. The difference between studying an animal’s survival and writing her a poem is the difference between asking how and asking why. The latter may seem odd, but it’s as much an adaptive response as a meerkat’s serial mating.

Poniewozik chooses to see a kind of sad beauty in the human responses evoked by the events of the show. However, it highlights the essential flaw of the show’s design: fans responded to the deaths of these animals as if they were humans, and responded in the same abstract, grief-stricken ways that people respond: with poetry, denial, and memorials. The same fans responding in this way seem unaware that they can make concrete differences in the lives of the meerkats: donations to the research project, write-in campaigns concerning the need to intervene when the animals are endangered, and so on.

Accordingly, despite the show reaching such a wide audience, its ability to positively affect change for the animal world is severely hampered. On a very basic level, it is not inaccurate to say that Animal Planet treated its Meerkat Manor viewers as children. This is because the nature of the highly-stylized human narratives imposed over an inhuman world is part of how many children are raised: Disney, for instance, has built an empire out of recreating complex tales into colorful, palatable representations that are easier for children to digest.

Beauty and the Beast becomes a tale of singing and dancing candles and clocks; The Lion King glosses over Hamlet with a lot of laughs and a couple of Elton John songs. However, these presentations are deliberately simple in order to impart simple values and themes onto an audience that is unable to grasp large concepts. In short: these presentations are the diametric opposite of documentaries, which are typically intended to provide detailed information on little-known topics in order to increase the knowledge of these (often esoteric) audiences.

Though she means it as a positive thing, Ginia Bellefante illustrates the danger of oversimplifying viewpoints when she says that “females in meerkat society choose their mates: In that way ‘Meerkat Manor’ feels just like ‘’Grey’s Anatomy. ’” The complex mating rituals of the animal kingdom are simplified into whatever narrative the viewer (through the producers, of course) wishes to impose on it (in this case, a very simplified form of feminism), and is likened to a popular television show.

The ostensible purpose of the documentary is actually hurt by this comparison: the audience is not better informed about the subject, because they have chosen to liken it to another form of popular culture. Young points out this trend in animal documentary culture: Wildlife film has institutionalized this tradition of explanation through anthropomorphization. Repeatedly, implicit comparisons to human behavior are used to enable viewers to more easily understand analogies. Therefore, wildlife film explains behavior by social phenomenon, not biological behavior, with terms like “mate selection” and “bonding”…

The important moments of our lives such as birth, mating, and death are therefore inserted into every wildlife film. (19) In turn, this mindset fuels the popularity of the show, ensuring that future documentaries will use the same effect in order to maximize ratings. That, perhaps, is what is most dangerous about the popularity of the show, combined with its abandonment of documentary traits to pop culture conceits: the fact that the replacement of facts with the romanticized notions of television drama will affect how millions of viewers receive information from future documentary programs.

From such anthropomorphized representations comes one simple, alarming fact: individuals using the television documentary in order to evaluate reality, rather than the other way around. Bellefante notes that from meerkat life, you might extrapolate the burdens of the modern woman enduring what the sociologist Arlie Hochschild has called the second shift. Female meerkats definitely bring home the bacon and fry it up in the pan.

They also play out a withering psychodrama of maternal ambivalence, offering their lives for their cubs but also evicting the ones who become too unwieldy. Going beyond simply identifying with the animals using the touchstones of reality (such as the plight of a meerkat matron bearing any resemblance at all to the plight of real, modern women), there is the implication that life lessons can somehow be extracted from the show.

Arguably, this is the zenith of the unreality that surrounds this show: that audiences believe picking and choosing positive meerkat traits (loyalty to family, resourcefulness) over negative meerkat traits (abandonment, the occasional bout of cannibalism) is anything more than the equivalent of thinking that vague horoscope predictions are an indicator of reality. It’s actually an amazing cycle that the typical audience member is likely unaware of: they achieve power over Animal Planet—indeed, over the entire documentary film process—by demanding more human-esque narratives from animals that are being filmed in the wild.

However, the more emotionally engage audience members do not seem to realize they are projecting their own traits (good and bad) onto the meerkats, and buy into this drama as inherently more interesting than actual human drama. Poniewozik rhetorically observes that “Manor is a study of animals, but it’s become a study of humans,” and rhetorically asks “How much reality do we want from reality TV? And when nature, producers and providence fail to provide justice, how do we step in?

” He believes that this is part of the same broken cycle: audiences accept as a conceit the false drama of the human narratives as a kind of necessary manipulation… “as viewers, we depend on that manipulation to provide the order, sense and purpose that the universe fails to. ” However, on the occasions that the documenters follow their aloof protocols and let a beloved meerkat die, the emotionally involved audience members are stunned that more was not done to intervene.

After all, in the eyes of the rabid fan, they have ceased being abstract representations of animals: instead, they are fuzzy proto-humans that apparently have much to teach the world about love, raising a family, and modern feminism. These lessons are waited upon breathlessly by audience members who long ago ceded their own humanity to their furrier better halves. Despite the harshness of this criticism, it cannot be overstated that Meerkat Manor was a revolutionary program that changed how animal documentaries will be filmed for decades to come.

However, they accomplished this by effectively catering to the lowest common denominator: an audience who still takes emotional cues from narrated animal adventures, and is waiting to see the online messageboard consensus about whether or not Flower more accurately represented second or third-wave feminism. The undeniable appeal of this form of rhetoric very nearly overshadows that which it omits: the pathos of watching the Whisker clan attempt to survive and thrive ends up blotting out the light of the obvious questions: where’s the logos? 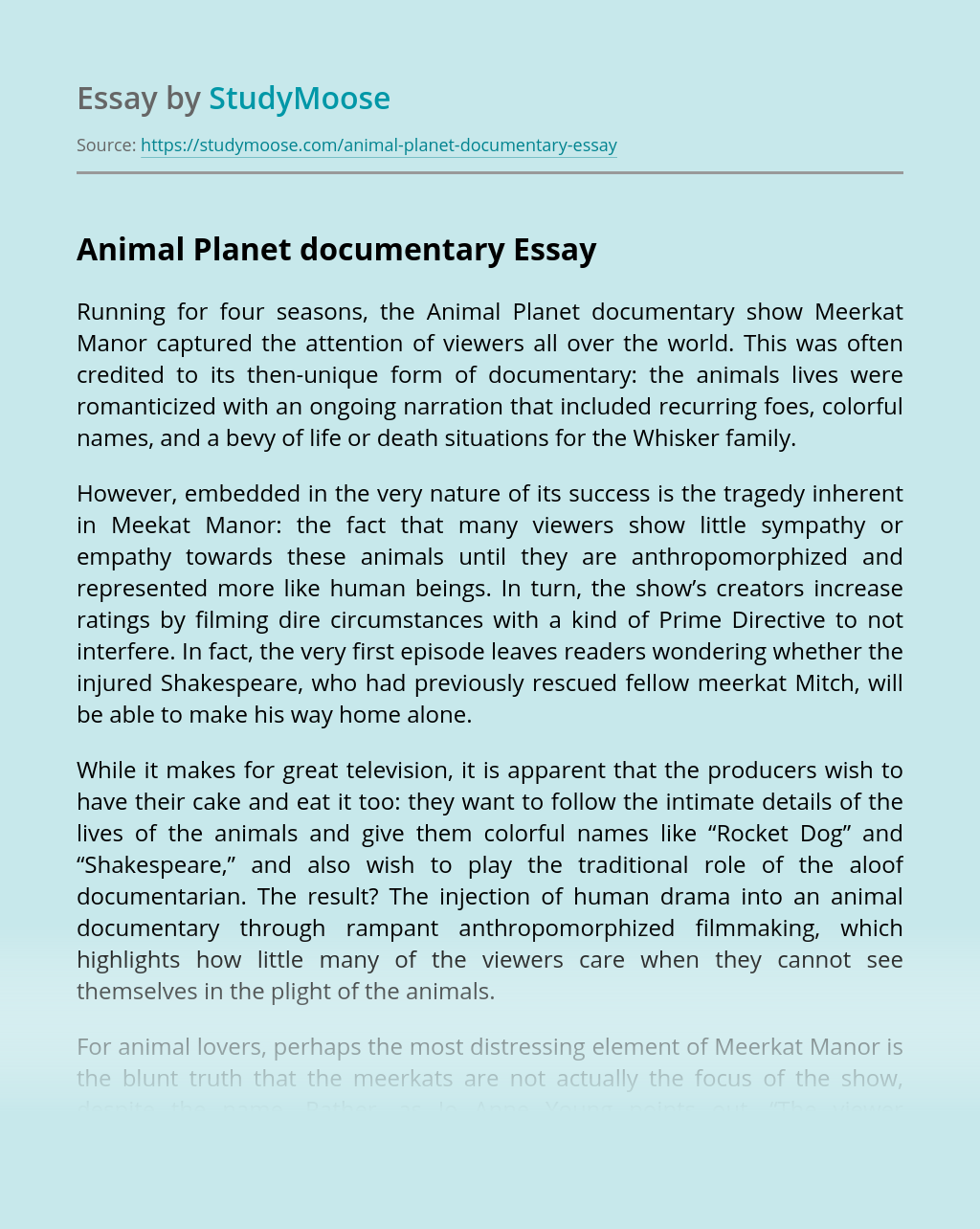