Photo Manipulation and Our Society

Almost everything we see today from the billboard ads to magazine covers, we see several photographs that are purposefully manipulated to either sell a product or an idea.

By seeing these photos we somehow ingrain in our memory the concept being conveyed through them. From perfect cookie cutter models and artists to the overly manipulated advertisements, these things are part of how the society defines their view of the world. The question now is; should photos be manipulated to effectively convey an idea to the society?

Photo manipulation is defined as “the application of image editing techniques to photographs in order to create an illusion or deception (in contrast to mere enhancement or correction), through analog or digital means.

Don't use plagiarized sources.
Get Your Custom Essay on Photo Manipulation and Our Society Just from $13,9/Page

” With this, we can say that photo manipulation is a form of art wherein you would drastically change and/or combine several images to create a new one to effectively show your concept as an artist. We could also say that photo manipulation is a technique where you can drastically alter an image to deceive people by creating illusions to promote a product or an idea.

There are other definitions of photo manipulation and it mainly covers how much of the original photo was changed to create a new one. When we see smartly conceptualized advertisements we somehow get that image stuck in our memory banks for their beauty and good use of technique. These advertisements work both as a great work of art making it a medium to sell something to the public. It really shows the creativity of the artist/photographer by transforming his pictures into something more powerful and thought evoking.

Photo manipulation as a work of art is one of the better sides of photo manipulation for it promotes both your creativity as an artist. These new images have a major effect on society for it may supplement your advocacy and a call for change. Several issues with photo manipulation have risen since it became popular in the 1920s. It has been extensively used for photojournalism. A picture is worth more than a thousand words. What you see affects your perception on what’s real or not, it can mislead from the truth and even make you misinterpret the facts.

Because of this the National Press Photographers Association (NPPA) in the USA has set a Code of Ethics which promotes accuracy of published images and over manipulation. We also see extensive photo manipulation in advertisements nowadays. In this current time people usually see advertisements having models with bodies which look like they’ve gone through a cookie cutter because of their perfection. Perfect skin, perfect smile, perfect teeth, perfect eyes.

We rarely see the real view where average people can relate themselves to and in turn feel good about it. It is completely understandable that advertising firms are after aesthetics and product imaging but they should do it completely in the bounds of what is natural and normal. In conclusion, photo manipulation is really a helpful technique in expressing one’s thoughts, emotions and ideas. When you manipulate an image you usually add or remove some parts to help make the composition of the photo better and more interesting.

Since we all have easy access to photo manipulating software we get to enjoy it by transforming pictures into colorful stories then it turns into a work of art. However, there are times that you get deceived by what you see and you wouldn’t know if what you’re seeing is real or not. This is sometimes the case with some photos being published in the news and advertisements. They do a great job with editing their photos that the public gets swayed with a wrong idea or perception of the truth. Photo manipulating is a skill to learn but use it ethically and responsibly.

Photo Manipulation and Our Society. (2017, Jan 22). Retrieved from https://studymoose.com/photo-manipulation-and-our-society-essay 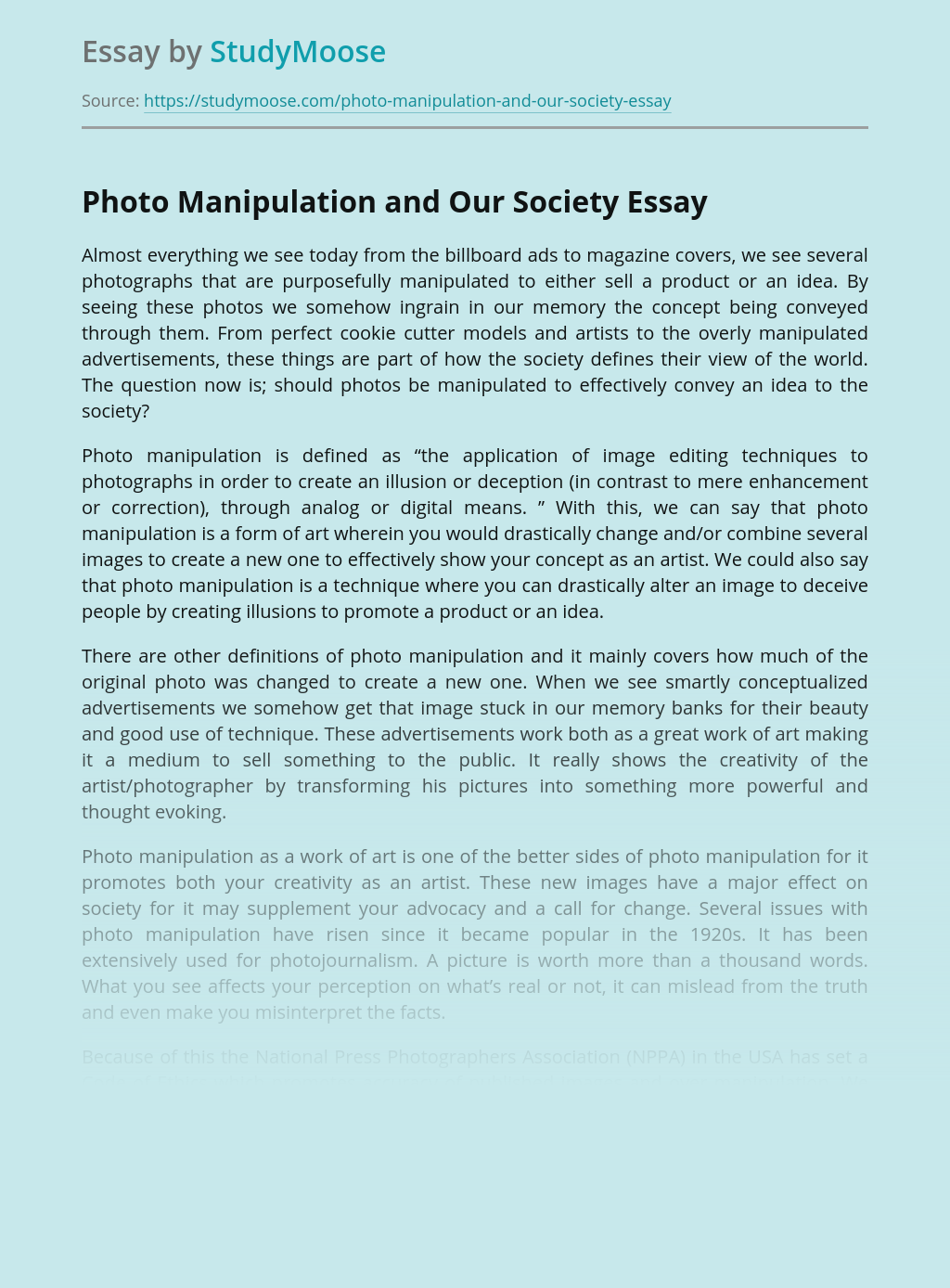 Ansel Adams was born February 20, 1902, in San Francisco, California. Ansel took an interest in music at an early age. He taught himself how to play the piano and delighted in the environments of nature. In 1916, he and his moms and dads went on a trip to Yosemite National Park where he received...

My great-grandmother, who is ninety-five years old, recently sent me a photograph of herself that I had never seen before. While cleaning out the attic of her Florida home, she came across a studio portrait she had taken about a year before she married my great-grandfather. This picture of my great-grandmother as a twenty-year-old girl...

awe mixed with terror The term “sublime” was considered to inspire which of the following feelings? Henry Fuseli Which of the following artists represented what was called the “sublime” in eighteenth-century art? use of a palette of dirty browns and grays In Courbet’s The Stonebreakers it has been said that he reveals to the viewer...

Pulitzer Prize-winning photograph made by Kevin Carter in 1993 I decided to describe the story behind this photograph, because of two reasons. The first one is a book I am reading now: ‘The Bang – Bang Club’. Kevin Carter – the author of this photograph belonged to this four-member club of South African photographers. The...

Almost everything we see today from the billboard ads to magazine covers, we see several photographs that are purposefully manipulated to either sell a product or an idea. By seeing these photos we somehow ingrain in our memory the concept being conveyed through them. From perfect cookie cutter models and artists to the overly manipulated...