Photo of Vague Moments of Life

Vague, is a work that looks at recapturing the vague moments of life. The photo presented was taken on a film camera and is of my own birthday from when I was a kid. I chose this photo, not because of what it represents, but for what it doesn’t. It is the impreciseness that invites the viewer to take a closer look at what is presented before them. Vague, leaves the viewer to make sense of the image for themselves as it looks at reinforcing the viewers imagination.

Don't use plagiarized sources. Get your custom essay on
“ Photo of Vague Moments of Life ”
Get custom paper
NEW! smart matching with writer

The aim of this image is not to explicitly tell a story, but to rather to tell a narrative of what once was. This photograph captures a moment in time where everything was pure. The highlighted/ inverted parts of the image show things dearest to me. Things such as my friends and my pool are all highlighted throughout the image. The chronological series of events that unfolded after this picture was taken, also attest to the fact that an image doesn’t necessarily tell the entire story, it merely shows what the photographer wants seen.

In this instance, the photographer being my parent wanted to show a happy kid who is experiencing pure euphoria. Although the picture isn’t very clear and doesn’t highlight any key characteristics of the subject presented in the foreground, it does exhibit the happening of an event. My aim with this image wasn’t to be bold, bright or obnoxious, it was to simply tell a story with whatever tools were present at my disposal.

The reason why I chose this aesthetic, was due to my fanatic obsession with film.

For the purpose of this paper, I looked at Dayanita Singh, Mike Figgis, Nadar and Warhol. As a part of my research I looked at and studied the work of Mike Figgis. I find Figgis work particularly interesting as he dwells into the use of film and texture. His techniques are unusual and thought provoking. The subject matter which he chooses to present in his work have a sense of immortality and persevere through the challenges of film in photography. Figgis starts of his series of work taking images from movies which have a textural element to them and adds effects to further demoralize their purpose and meaning. He further explores this idea by creating a movie or series of images which tell a story. I found this merger between film and photography particularly interesting, as both mediums can be manipulated to tell a different narrative than what was intended. This is what my image intends to do without the viewers knowledge. I aim to tell a different narrative than what is perceived. Vague, looks at exploring the boundaries of the human imagination. To a viewer who has very little, to no information about the photograph, the photo may seem confusing and therefore leaves it up to the viewers imagination to conceive an idea that best suits their needs. It is this constant need to put sense into objects and especially photographs, which will give a meaning to the photo.

To add key identifying features to help break the monotony of the photograph, I have inserted some inverted space, as the different gradients give depth to the photograph. The multi-layered print offers an explanation and in retrospect gives the viewer a chance to add their own perspective to the image. In the review of the book Nadar Warhol Paris New York I found the uncanny relationship photography can have with pop art. Although, Nadar who photographed himself as an Aeronaut, could be considered completely different and opposite of what Andy Warhol was prominent for, it is rather hard to ignore the fact that both artists’ aims were to excite the viewers imagination. Whether it be Three portraits as an Aeronaut 1863 or Ethel Scull 1963 by Andy Warhol, it is hard to negate the fact these images were intended to have an impact on the viewer. Vague follows the same trajectory and aims to undermine the traditional values of understanding something. Both Andy Warhol and Nadar have the full power of the photograph to subvert the viewer and lead them down the path of ambiguity. The artist- in this case myself- have had the upper hand in deciding what goes and what doesn’t, even the uncomplimentary ideologies are also welcome.

I would briefly like to gander at works by Dayanita Singh as I found her works quite interesting and remarkably effortless to decode/ understand. Her photographs are rather quite unique, as they offer a different perspective to the average modern-day Indian families and households. She looks at Photography not as a tool to convey a story but to rather act as an evidentiary to an event. “Being photographed was just another family ritual for me. Photography meant that I had to sit still while my mother counted the steps towards me in order to focus the camera”. It is not the approach that attracts me towards her work, but rather different narratives that can be derived from her images. Her images might be of a family setting in a somewhat traditional Indian household, but in my opinion her narratives are up to us to choose. Something I find correlating with my own work thus far; it is also her uncomplicated approach that makes her photographs digestible. Vague follows the similar path, in terms of giving the viewer a wide palate of scenarios to select from. My approach towards presenting a story, is also derived from the very little to no information I personally have about the event presented forth.

To conclude. In my personal opinion, I do not feel the need to convey or tell a story through the medium of photography. I would much rather leave the interpretation and conclusion to the viewer. Much like an abstract painting, the meaning is hidden beneath the surface, and I order to get to it one must traverse through the many layers on the surface. But even when we uncover the true meaning of something, how do we know that it is the one.

Photo of Vague Moments of Life. (2019, Dec 11). Retrieved from https://studymoose.com/photo-of-vague-moments-of-life-essay 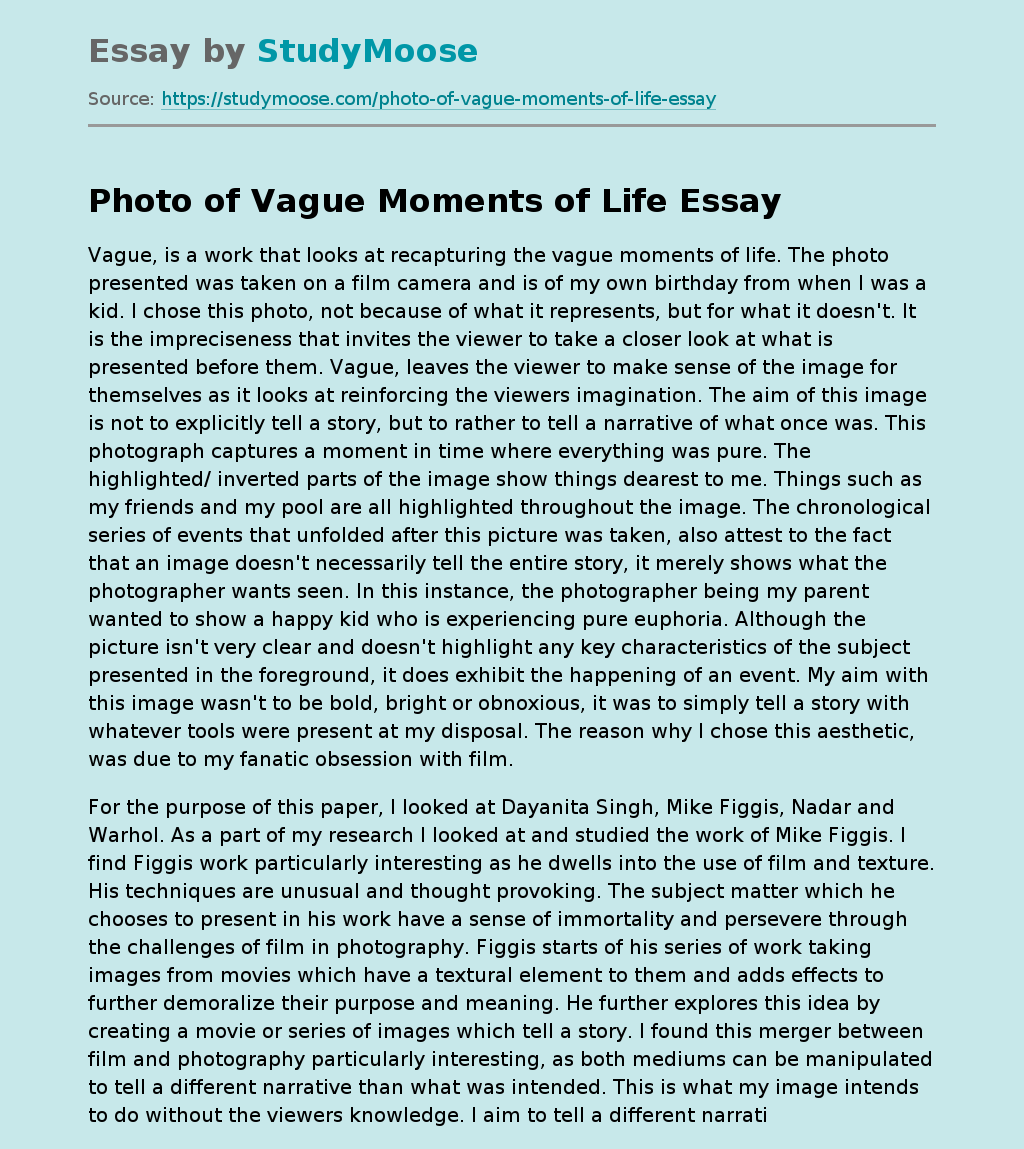