Defining Moments in the Canadian History

All throughout Canada in the 20th Century there have been numerous events, actions and decisions that we call defining moments. Canada has been through many battles, very hard chosen decisions, and gone through many changes that have changed the way Canadians live today. The battle of Vimy Ridge, the life on the home front in World War One, the invasion of D-day, and the impact of immigration were the most important defining moments for Canada in the 20th Century. Vimy Ridge is now called a Canadian Milestone.

Don't use plagiarized sources. Get your custom essay on
“ Defining Moments in the Canadian History ”
Get custom paper
NEW! smart matching with writer

It was one of the notable moments because it brought world recognition and a strong sense of patriotism towards Canada. The battle of Vimy Ridge took place at Vimy Ridge and was on Easter Monday, 1917. There had been more than just one battle over the Ridge. The French had tried to win the Ridge three different times, but they were not successful. In fact, none of the countries were. When it came time for Canada, they used a new and different approach.

They combined careful preparation, precise timing, and a great job of the gunners. Canada won the battle in a four day victory.

Canada gained more land, more captured artillery than any other British offensive in the entire war, and more prisoners. The battle of Vimy Ridge was so very important because it was after this fight that people started to appreciate Canada and thought that Canadians could manage to be their own nation. Any time before the battle of Vimy Ridge, Canada had always been allied with Britain.

With the winning of the Ridge, Canada got more independence that changed the way people thought of Canada. One Canadian soldier at the battle recalled: “The winning of the Ridge gave every man a feeling of pride. A national spirit was born; we were Canadian and could do a good job of paddling our own canoe.”1. The Canadians had won the only significant victory for the Allies in 1917. It was a turning point in the war for the Allies and for Canada as a nation. The beginning of World War One had a great impact on the living conditions back on the home front in Canada. While the war was going on, it was a totally different situation back at the home front in Canada. Since most of the men were at war fighting overseas for their country, things had to change for the women of Canada.

They had to help out their country in different ways then 1. Evans, R., Fielding, J. Canada. (Canada: Nelson Thomas Learning, 2000), 82 fighting. Many of the women helped by knitting warm clothing and making bandages for the distribution by the military. They also contributed by organizing numerous committees and became unofficial military recruiters, pressed by posters appealing to wives and the patriotic mothers of the war. Many of the women took on jobs that had been considered men’s work before the war started. They started working in factories and took up all kinds of laboring jobs. The role of Canadian women in the war also gave them additional ammunition in their own campaign for their right to vote. Until 1917, the Canadian law stated that “No women, idiot, lunatic, or criminal shall vote.”2. Women winning the right to vote changed the way that people felt about women. Before the war, their job was to stay at home to cook, clean, look after their men and children. The men had always worked and supported their family. Without World One starting, women today may still be living the same way because they would have not had the chance to show everyone that they were capable of doing men’s jobs and have to the right to vote.

D-day was considered as the turning point of World War Two to many people. Operation Overload took place June 6, 1944 in Normandy, France. The invasion was supposed to start June 5th, but got postponed due to weather. The Allies had learned from the disaster at Dieppe, that this time that they had to plan and rehearse the invasion down to the smallest detail. It was a long-awaited invasion that the Canadians knew they could do right and try to forget the tragic loss at Dieppe. They had managed to keep the whole invasion a secret from the Germans. The Normandy beach of northern France was the selected site for the invasion. Although Canadian forces were smaller then the other Allied forces, their contribution to the invasion of Operation Overload was critical. Most of the Canadian contributed by landing on Juno Beach, where the landing went pretty smooth. The invading force was supported by a large amount of artillery firepower given by Allied ships. There had also been a special landing craft equipped to fire rockets on the Germans. The Canadians faced underwater obstacles, land mines, barbed wire, and heavy machine-gun fire from the Germans. Canadians managed to get through all this and move inland.

This was a great victory for Canada because at the end of the day they had been the 2. Bain, C.M., DesRivieres, D., Flanerty, P., et al. Making History. (Toronto: Pearson, 2000), 33 only Allied troops to reach their D-day objectives. The terrific progress that was made from the landing on Juno Beach was the most important start that led other great things to start happening for D-day. Later on in D-day, Canadians were given the task to liberate the Netherlands. The Canadians did an extraordinary job on that order. Facing defeat, Germany surrendered on May 8, 1945 and Hitler then committed suicide. Most say that it was the turning point that signaled the end of the war. By doing such a great job during D-day it let Canadians liberate other countries and made Canadians really feel good about their country. One of the most important changes of all in Canada was the impact of immigration. In 1967, Canada had made a new immigration policy. Immigrates were chosen by a point system based on an education and employment perspective. Canada needed people with training and specific skills.

Under this system, applicants were given points according to criteria such as age, education, ability to speak English or French, and the current demand for any specific job skills the applicant possessed. Those who received enough points were allowed to immigrate to Canada. Letting immigrants in the country really enriched Canadians lives with contributions to food, fashion, religion, education, and politics. Immigrants came in significant numbers from places varied as Pakistan, Hong Kong, India, China and the Caribbean. In 1976 the Immigration Act was changed to allow immigrants in Canada with family members to come to Canada and encourage independent immigrants who were bringing needed job skills. This really helped out Canada and used the immigrants to help work in Industry. Multiculturalism came into effect when immigrants starting coming to Canada. For some Canadians it made them feel uncomfortable at first, but later on became familiar with it.

The Immigration Act was also a response to Canada’s economic needs. Canada’s birth rate and the size of Canadian families started to increase. The Immigration Act was a way for the federal government to keep Canada’s population and encourage economic growth. From the Act, Canada is now friends with a lot more different countries. Those counties are willing to help out Canada when in need of help and Canada will do the same. In conclusion, the four most significant, defining moments in Canada in the 20th Century were the battle of Vimy Ridge, the life on the home front during World War One, the invasion of D-day, and the Immigration Act.

In the battle of Vimy Ridge, we grew to be our own nation, brought world recognition and gave Canadians their own thought of patriotism. The life on the home front during World War One was important because it was then when women had a new role to play. They got to vote and had all kinds of jobs that would usually be men’s work. The invasion of d-day was a signaled turning point to end the war. Canadians played a great role in the invasion. The impact of Immigration helped a lot by enriching Canada with their contributions to food, fashion, religion, education, business, politics and many more. All these moments were significant for Canada and changed the way that Canadians live today.

Defining Moments in the Canadian History. (2016, Jun 19). Retrieved from https://studymoose.com/defining-moments-in-the-canadian-history-essay 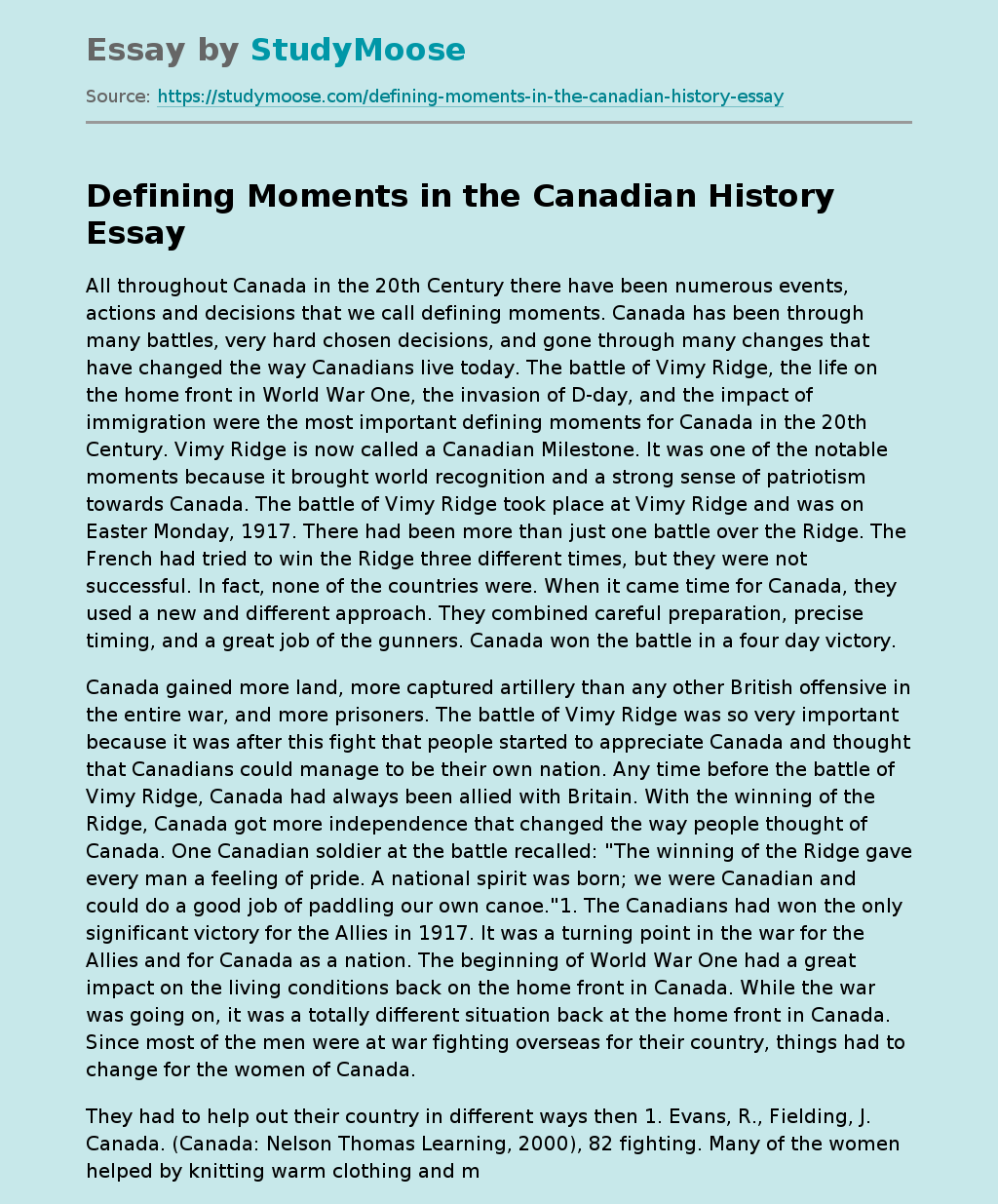