Values and Traits of Filipino Films
Philippine Cinema has unique values and traits. Don Jose as the Father of Filipino Films labeled the Filipino films as quality content and has a commercial appeal among movie goers. Many of the films created by Don Jose Nepomuceno were received the approval of the box office and win the heart of film critics. Nepomuceno has a mind-set in every movie that he will create that a content of a movie should have the combination of artwork and crass commercialism (Quirino, 1983).

Don't use plagiarized sources. Get your custom essay on
“ Philippine Cinema: An in-depth Analysis ”
Get custom paper
NEW! smart matching with writer

Nepomuceno did not know that he will become a master of film creation here in the Philippine Cinema. Nepomuceno studied fine arts in his college degree and after finishing that course he continued studying electrical engineering. He is also a business minded person at the very young age because of the influence of his family and they have their own business stalls. The combination of his technicality with his background in electrical engineering and the artistic mind of Don Jose as he had a background in his fine arts degree led him to his popularity and became a successful director in Philippine Cinema.

He’s mind as business person also helped him to create movies that will approve the movie-goer’s choice as the competition from other films especially Hollywood films were tough at that time. He survived his movies as compare to other Filipino filmmakers to remain on the circulation (Qurino, 1983).

On the study conducted by Nicanor Tiongson, she mentioned in her article entitled “Four Values in Filipino Drama and Film” that most of the films in the Philippines have a perspectives of 1.

Tiongson (2004) concluded on the said article above that the first value which is white is beautiful is the strongest evidence of colonial mentality from the date when we were colonized by the Spaniards up to the present time where in we’re introduced to Western-pop culture. Television also showed the concept of having white skin is beautiful. Lots of commercials endorsed to use whitening soap, lotion, or even taking tablets or capsules are prescribed to have fair and white skin.

The said article based on the study performed by Tiongson came up with a resolution and recommendation that those four values must be replaced by the following: 1. Maganda ang kayumangi 2. Masaya ang palabas na may laman 3. Mabuti ang may sariling isip 4. Gaganda pa ang daigdig. This only show that we need to create art that will help to lift-up our own culture. The article sends a message that if we think we have good content of the films, we can make it better by trying the values that we don’t use ( Tiongson, 2004). As what Tiongson concluded on her critics in Philippine Cinema, the content of the films produced locally became low and not offer unique storyline anymore.

Viewers now a day entertained and patronized movies that has no content of artistry and it has a universal plot of story which can be viewed and be predicted even at the start of the story. As what important from the current film industry especially in mainstream movies are to give entertainment among the audience and it should have a crass of commercialism even the quality of the movie will suffer. It seems the reason why many Philippine filmmakers and film industry are currently facing huge problem in terms of gaining trust from the audience and the positive feed back from the film critics. Joe Quirino(1983), reported on his book “Don Jose and the early Philippine Cinema” that there are only two kinds of Filipino movies and both of them make you cry – one because it’s so sad and the other it’s so bad.

This only means that early cinema created films that will touch the heart of viewers. Filipinos really love the story of a film or telenovela which has drama-genre that made their eyes cry.

Atty. Espiridon Laxa (President of Philippine Motion Pictures Producers Association) narrated the traits of Filipino films and the reason on why it always cater sad stories in his speech – “When our film industry came into existence in 1917, rather than functions as an art expectedly to reflect the different facets of Philippine life it became a medium of expressing the sadness of a people who suffered from foreign domination after another. This why so many years the local films depicted sob stories” (cited in Don Jose and the early Philippine Cinema, Quirino,1983).

Colonization from different foreign countries was the reason why early cinema depicted into sad stories or drama-genre of films. Current events in our society might be a big influence on the trends of films produced within a certain period of time.

Marc Ferro- co director of Annales (ESC) (as cited by del Mundo, 1998), he explored the intersection between history and cinema. “We need to study film and see it in relation to the world that produces it what is our hypothesis? – that film image or not reality, documentary or fiction, true story or pure invention, is History (pp. 29).

Like a simple business industry, cinema industry also encounters problem and challenges like financial aspect that affect the number of films produce each year, huge amount of taxes placed by the government in the Philippine film industry and at the same time the lack of support of the government to our filmmakers and film industry.

The main root of the low quality movie produced locally is the wrong perspective of most of the filmmakers especially in the mainstream industry. The perspective of a master cinema by Filipinos and filmmakers are represented by the foreign films. The Filipino filmmakers failed to break the influence of the colonialism in the films that they created ( Del Mundo, 1998).

The main challenge among Filipino filmmakers is to go back to the roots of Philippine Culture like moro-moro and zarzuela but not necessarily revive them, but to explore these indigenous sources with new character and identity. This might help Filipino blind eyes of appreciating our own native culture and can bring a promise of brighter future of Philippine Cinema (Del Mundo, 1998). 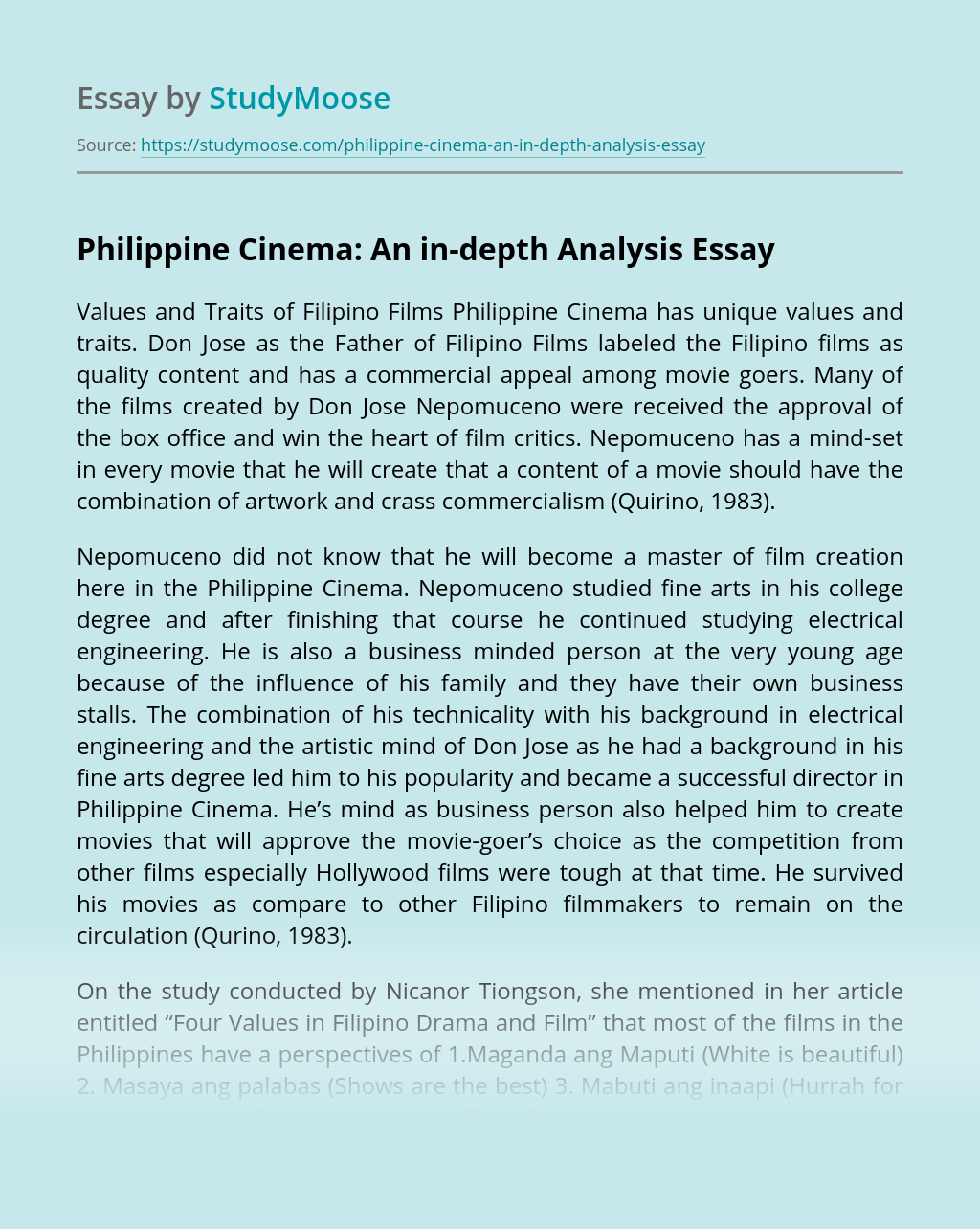