“I think every person has their own identity and beauty. Everyone being different is what is really beautiful. If we were all the same, it would be boring,” says Tila Tequila (n.d.). Every person is born uniquely and deserves equal treatment no matter what their identity, class standards, and sexuality is. In the novel, The hate U give (2017), it follows a sixteen-year-old African American girl called Starr Carter who lives in a small, poor community full of gang activities. However, she attends a private white school due to the availability of more educational resource, and opportunities than her neighborhood schools.

Don't use plagiarized sources. Get your custom essay on
“ Person’s Identity and Beauty ”
Get custom paper
NEW! smart matching with writer

In addition, she balances between the two worlds separately as she is one of the few black children. Starr struggles balancing her two worlds that of Williamson Prep and Garden Heights, police brutality, and unfairness treatment of the media towards her unarmed friend, (Khalil Harris), who was killed by a white policeman. For minorities, like Starr, they struggle because it is unfair for them to be treated differently than other people.

Identity is described as the characteristics of a person that makes an individual apart from the rest. For minorities, identity is important to develop through balancing dual identities, authority, and voice.

First, Starr expresses being split between her Williamson Prep and Garden Heights since she was the only black kid there. When it comes to Williamson Prep, the differences were in race and class standards. Although most of her classmates at school are white, most of her neighbors are black. She tries to balance her dual identities by making sure she is neither considered too black at school nor too white at home. She describes how hard it had been for her to fit in that community at home. “As long as I play it cool and keep to myself, I should be fine. The ironic thing is though, at Williamson I don’t have to “play it cool” I’m cool by default because I’m one of the only black kids there. I have to earn coolness in Garden Heights, and that’s more difficult than buying retro Jordans on release day” (Thomas, 2017, p. 11). Similarly, in the article “Negotiating identity in a bubble: A critical race analysis of African American high school students’ experiences in an elite, independent school,” Jasmine, a (10th grade) African American student describes her experience in an elite, independent school. Jasmine described it as:

Most of the African American children at my school don’t live around the area like most of the white children do, so they [the white students] don’t really understand what goes on with the whole being black in my school. I like to think of it as a bubble. And you know how at times you’re able to stick things into a bubble and take them out without the bubble actually popping, however it’s still very fragile. That will be more of the situation, at least for me, being a black student at Wells, mainly because it seems like I’m taken in the bubble and taken out of the bubble, but still when I go there I have to be considered part of that community, and when I come home I still have to be considered part of that community, and it’s a very fragile situation just like the bubble. (DeCuir-Gunby, 2007, p 40(1))

African American teens struggled balancing dual identities to be among of both communities at home and at school.

Second, African American teens need to adapt the way they act and behave. Be more aware of the consequences of their actions, and how they will be judged by others. Racial discrimination is when the police officer shoots her unarmed friend during pulled over. Because he thought that Khaliil was reaching for a gun and it would be better for him to remain safe. April Oprah, Starr’s legal representative, said “Officer Cruise claims he saw it in the car door, and he assumed Khalil was reaching for it. The handle was thick enough, for him to assume it was a gun” (Thomas, 2017, p. 217). This shows how easily the minorities are being judged and they can easily be a victim because of the color difference. Starr and her brothers were taught how to behave around police for their own safeties and she was grateful that her parents gave that awareness. On the other hand, Khaliil never had that chance because of supporting his family. For black children knowing how to behave in front of police is an important issue. Then the media addresses Khalil as ‘Thug’ and blames his own murder, so to justify the officer’s action for his own safety.

Third, Identity can be developed through practising one’s voice and struggles for speaking up against oppression. after the death of her friend Starr’s world turns upside down and she feels the guilt of his unfair treatment. She realizes how important is that she speak up for him. She starts a Tumblr blog to show the world the Khalil she knew, and how close they were. She gets a strength by her parents and by the activist, April Oprah, to give a television interview to tell what really happened. However the detective focused on why Khaliil was at the party of that night they were pulled over, if he was drinking, or sold drugs. Instead of inquiring the other side of story. Starr’s mom 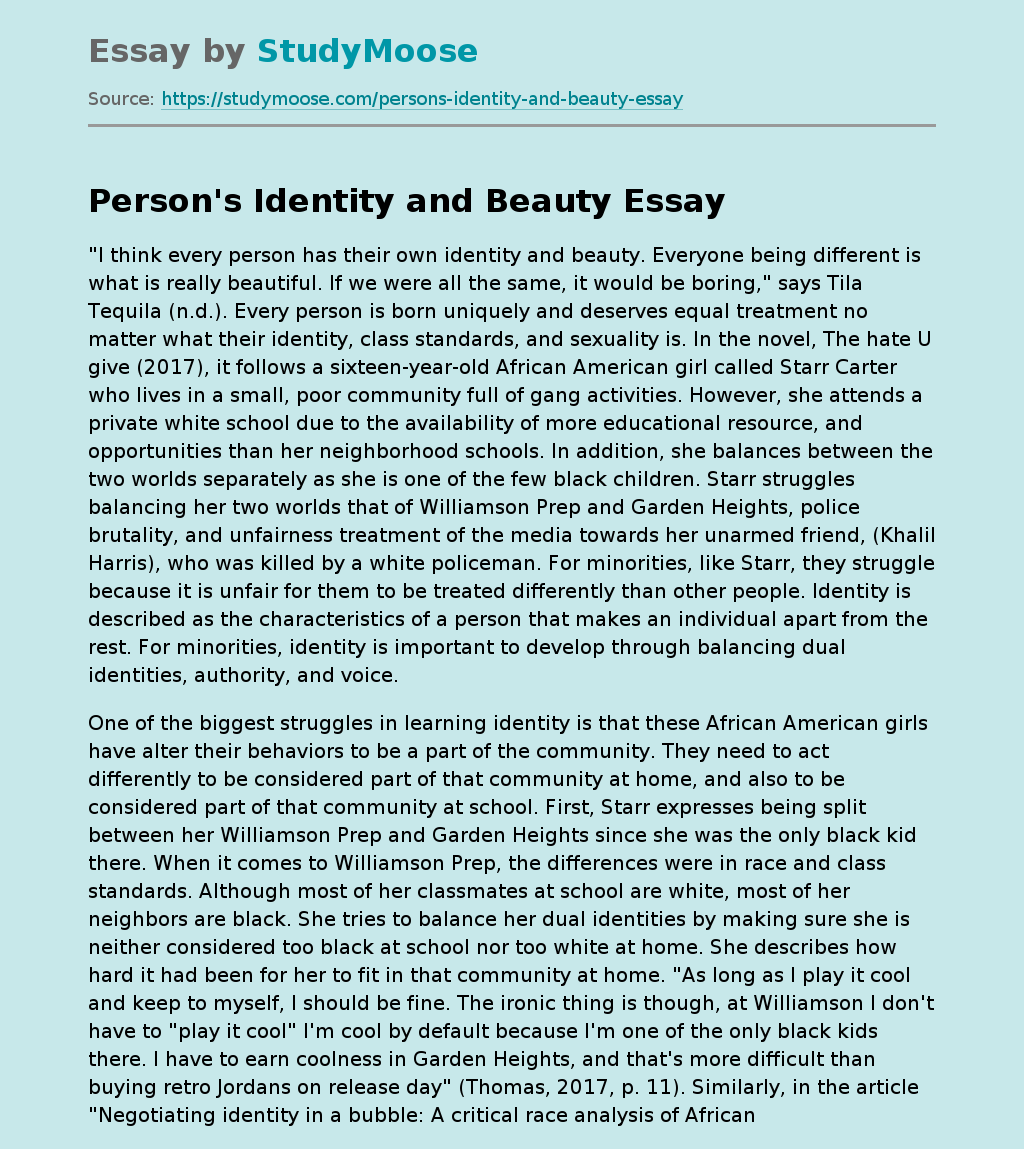