Advertising and powerful images have always gone hand in hand in producing effective advertising.  Without powerful visuals, advertisements in a newspaper would look very similar to the news and obituary.  Images are the language of advertising and without them, people would have to go through the rigorous task of reading about a product and not seeing it in full action color.

This advertisement is highly effective in communicating its message to the viewer.   It is effective because it makes the consumer want to buy Pepsi, which is of course the objective of advertising.

Don't use plagiarized sources. Get your custom essay on
“ Pepsi Advertisement Analysis ”
Get custom paper
NEW! smart matching with writer

First, the image is highly attractive and pleasing to eye because of the contrasting colors of blue and yellow-orange which will immediately stand out if placed beside other advertisements in a magazine or newspaper, or even among other billboards.  This is important because advertisements are not supposed to blend in with its surroundings, or else they will go unnoticed.  Standing-out among other advertisements or other forms of media is crucial.  This is because despite that fact that an advertisement may be funny, witty, or memorable, it important that it must first be initially attractive to target viewers.

This Pepsi advertisement makes good use of color as a medium of showing the tone or mood of the message the advertisement is trying to convey.  Blue or teal is the most dominant color in this advertisement.  The can of Pepsi is blue and so is the table and the rest of the background, giving the advertisement a very cool and relaxing visual feel.  It is not only the color of the product’s packaging, the can of Pepsi, but it is also pleasing to the eye and relaxing to look at.  It is curious to note that its direct competitor, Coca-Cola, uses red.

Upon looking at the bowl of cheese curls, one’s view is immediately directed towards the part of the cheese curls that is forming a hand.  Then only is the view directed to look at the can of ice cold Pepsi.  This is how the composition of objects within a frame can control the gaze of the viewer from one object to another until the entire message of the advertisement is conveyed.

Aside from showing the product itself, the advertisement shows a bowl of cheese curls.  This is a snack which is commonly eaten by children, teenagers, and young adults alike.  The use of this snack in the advertisement together with the can of Pepsi shows us the target audience of this image: children, teenagers, and young adults.  It is most likely that the people who have eaten cheese curls or other similar products are the ones who will understand why the bowl of cheese curls is reaching out for the can of  ice cold Pepsi.

The cheese curls, shown in a happy shade of yellow-orange, is arranged in such a way that brings humor to the image.  This is the punchline or the big idea of the advertisement.  The cheese curls are shown to have crawled out of the bowl and holding on to each other to form a human hand that is reaching out for the can of cold Pepsi.

It is this ultimate message that triggers the viewer to think, “Aha!” and subsequently crave for cheese curls and a can of ice cold Pepsi.  It persuades the viewer to buy a can of Pepsi and a bag of chips.  If one looks more closely, the can of Pepsi is wet with dew around it, indicating that it is a very cold can of Pepsi.  This makes the can of Pepsi a lot more enticing to the viewer while he reads the newspaper, magazine, or while walking in a subway station, especially in the middle of a hot summer day.

The angle of the entire image is also very direct and horizontal, not signifying any status symbol, or edgy look.  It is clear, plain, and simple, and straightforward.  It is just showing the viewer in a very plain and simple manner the humor of the punchline. This makes the image easily understandable when viewed from a distance or from a moving vehicle.

It is interesting to note that nowhere in the image does it show or explain what exactly Pepsi is.  This is because Pepsi has long been a player in the soda industry and has been advertising long enough already.  They no more need to inform consumers what exactly their product is.  This is one of the advantages of being a known brand. It allows the brand to use humorous advertisements such as these.

Clearly, there is no way that Pepsi could have effected this advertisement without the use of images.  Images in advertising are of paramount importance. 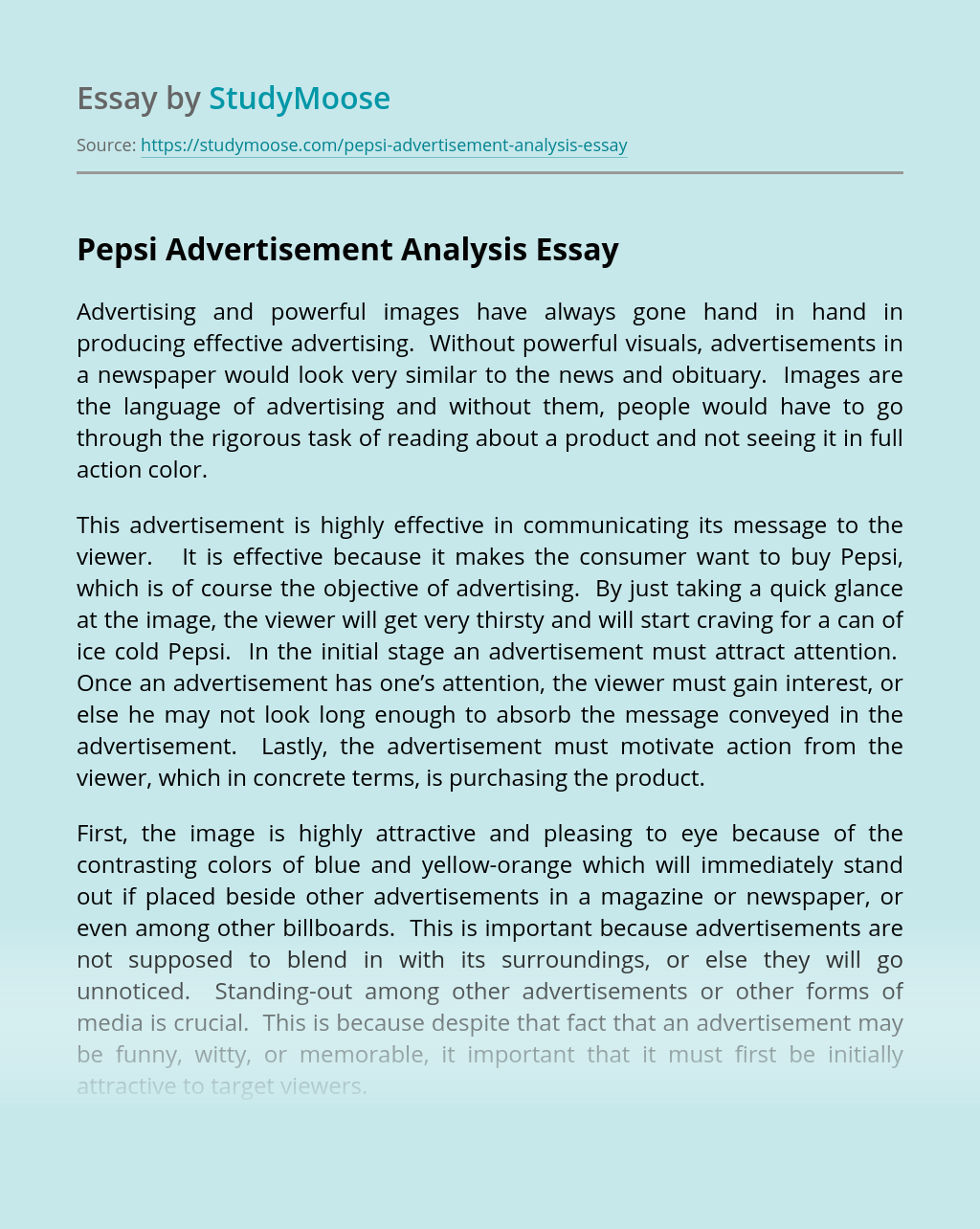