Pepsi is one of the world’s top carbonated drink company established in 1893. Today it has grown into a multibillion company which produces some of the most popular soft drinks, cereals and franchise eateries (Our History 2011). But Pepsi, like most of the other companies is unable to escape competitors in their general task environment who directly affect their competitive advantage. Competitive advantage is the advantage a company or product has over other companies in terms better attributes such as cost advantage, differentiation advantage, network distribution, and customer support that will help the company gain better sales compared to other companies (Hao, Ma 1999).

Don't use plagiarized sources. Get your custom essay on
“ How Competitors Affect Competitive Advantage of Pepsi? ”
Get custom paper
NEW! smart matching with writer

For decades, Pepsi’s main competitor has been The Cola-Cola Company, which is the world largest beverage company, followed by companies such as Cadbury Scheweppes Plc, Kraft, Dr, Pepper Snapple Group, Cott Corporation and Nestle (Joys M, Wolburg 2003). All these competitors are coming up with more innovative ideas to gain sales.

A general sales key is to avoid price war between competing companies in the same industry because the companies must reduce their prices below the production price. This would affect the cost structure of a company and put the company in competitive disadvantage because sales below price margin means the company is selling at a loss.

An example of price war between Pepsi and the Coca-Cola Company would be in the 1970’s. Coca-Cola bought most of the packaging bottles in the market to ensure lower production price beating its other competitors.

In response, Pepsi had to cut its advertising and drop its selling price, decreasing its cost advantage (Coke and Pepsi’s uncivil). The price war between Pepsi and its competitors has been continual for decades. This tremendously affected and cost advantage of Pepsi, thus reducing the company’s competitive advantage.

The distribution network of its competitors also disrupts Pepsi’s competitive advantage. Pepsi must compete with its competitors to expand their distribution network in more countries to expand their sales because only one company can dominate the industry. Companies unable to dominate would lose competitive advantage and sales. For example, Coke controls 75 percent of the soft drink market in Israel and Pepsi is unable to penetrate the market due to Coke’s strong distribution (Hellman, Ziv 1991). Coca-Cola and Pepsi is also always competing to expand their vending activities in every district to increase sales (Pierce, Gala 2005).

A research also shows that Pepsi, Coca-Cola and Dr Pepper Snapple are continually fighting for ‘calendar marketing contracts’ with supermarkets in United States, which allows an exclusive promotional shelf space of the product for a period of time. During months when other soft drinks brands are promoted in this promotional shelf space, there is a drop in sales of Pepsi. This shows that the presence of competitors trying to expand their distribution network, vending activity and shelf space activity will cause decreases Pepsi’s competitive advantage (Klein 2008).

Main competitors also contribute negative impacts on the differentiation advantage and product offerings of Pepsi, decreasing its competitive advantage. For example, Pepsi’s competitors are always imitating Pepsi’s new products. The competitor’s impeccable speed in producing similar products in the market affects the sales that Pepsi should get for their investment in research and development. For example, when Pepsi launched its Pepsi Light, Coke came up with Diet Coke soon after. Soft drinks companies that are always imitating their competitors or are being imitated is causing competitive disadvantage whereby there is little product differentiation in the market (MacArthur 2006).

However if the company does not imitate or come up with new innovative products they will also lose competitive advantage to their competitors who are always developing new products. When Cadbury Schweppes caught Pepsi off-guard by producing new beverages such as Hawaiian Punch, and Nantucket Nectar, Pepsi’s market share was heavily defeated (O’Connor, Brian 2002). Pepsi’s competitor also affects Pepsi’s competitive advantage through advertisement and promotions.

Every time Pepsi advertises, Coca-Cola will immediately respond by doubling its advertisements, making Pepsi’s advertisement and sales target redundant (Rivalry on various fronts 2001). Coca-Cola is always competing with Pepsi to be the main sponsor in every Olympic game as this sponsorship significantly affects the consumers’ brand choice during the event period (Cho 2011). Competition by other competitors and their advantages directly affects Pepsi. Competitive advantages by other companies will affect company’s sales, revenue, reputation and even customer support and loyalty.

Mangers must also have a great understanding their company’s environmental opportunities and threats as well as internal strengths and weakness (Barney, Jay B 1995). This can be found by a planning technique called the S.W.O.T analysis. S.W.O.T analysis will allow managers at different corporate level will select business, corporate and functional level strategies to help gain competitive advantage (Waddell, Jones and George 2012, 148).

Another model that managers should consider carrying out is the Michael Porters five-forces model. This model helps managers isolate particular forces in the external environment that are potential threats to the company (Waddell, Jones and George 2012, 148). 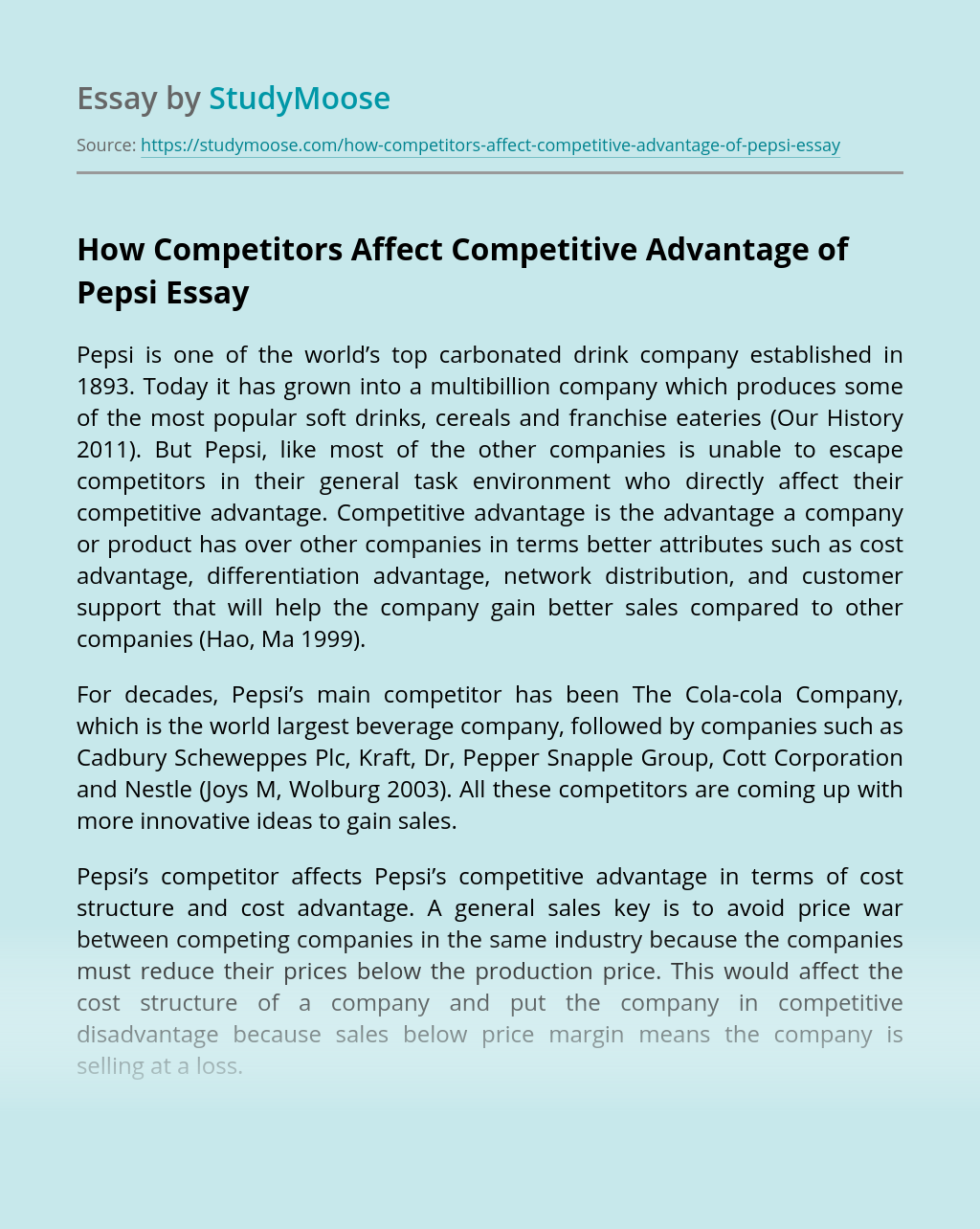