Coca-Cola (Coke) and Pepsi-Cola (Pepsi) have been the most popular soft drinks for many years, and has also been each other’s biggest competitor. Coke was created in 1885 by John Stith Pemberton, a pharmacist, and was initially made as a tonic (Smith, 2012). In the beginning, Coke had cocaine in it, which was to fight depression and also make consumers addicted to the drink. In 1904, the Food and Drug Administration eliminated the use of cocaine, a key ingredient, in the United States, so Coke decided to keep its name and endorse the beverage through aggressive advertising (Smith, 2012).

Don't use plagiarized sources. Get your custom essay on
“ Coca-Cola versus Pepsi-Cola: Competitive Strategies ”
Get custom paper
NEW! smart matching with writer

Thirteen years after the creation of Coke, in 1898, Caleb Bradham, a pharmacist, created a beverage named Brad’s Drink (later changed to Pepsi), and was Coke’s main competitor (Smith, 2012). Both companies focused on advertising, but they took different approaches. These different approaches that each company uses, also reflects the differences of their corporate cultures. Coke and Pepsi have been competing with one another since the beginning, and this competition seems to have pushed both companies to remain at the top of their market.

Corporate culture is defined as an organization’s system of principles, beliefs, and values (Boone & Kurtz, 2012). Coke’s corporate culture focuses on seven core values, which are leadership, passion, integrity, collaboration, diversity, quality, and accountability (Coca-Cola, 2013). Coke focuses on their employees and their brand in order to keep the promise to “refresh the world in mind, body, and spirit, and inspire moments of optimism; to create value and make a difference (Coca-Cola, 2013).

” On the other hand, Pepsi’s corporate culture focuses on performing with a purpose. Performing with a purpose means blazing new trails, never settling for second best, succeeding and celebrating together, and doing something bigger (PepsiCo, 2012). Pepsi also focuses on nutrition by addressing health concerns. The difference between these two companies is that Coke seems to focus more on their employees, where as Pepsi, seems to focus more on staying ahead of the competition by always coming up with new trends or products.

Pepsi’s culture has benefitted Coke by focusing on healthier alternatives rather cola products. In 2006, when Indra Nooyi took over as CEO, she decided not to continue to battle with Coke. Instead of cola products, Nooyi decided to focus on water, juices, teas, and sports drinks. Since Pepsi began focusing on healthier alternatives, of all soft drinks, Coke has controlled 41.9 percent of the market compared to Pepsi’s 29 percent (D’Altorio, 2013). On the other hand, Coke’s focus on their brand has benefitted Pepsi’s decision to not focus mainly on cola products. Coke clearly commands the cola war between the two companies, but Pepsi has won the revenue battle, bringing in 38 percent more revenue than Coke in 2011 (Russell, 2012). Pepsi has expanded the company by starting the Quaker Oats, Gatorade, and Tropicana divisions.

By opening up these divisions, Pepsi’s goal is to reach $30 billion in revenue by 2020 (D’Altorio, 2013). Coke’s focus on the brand, allowed the company to clearly control the cola market, but by limiting the company to soft drinks, Coke has allowed Pepsi to tap into other markets and gain more revenue. Another part of Pepsi’s culture that has benefited Coke was “doing something bigger.” Pepsi has been known to use celebrities to promote their products, but there have been instances where these promotions have backfired. The most recent of these mishaps was in 2002 when Pepsi pulled an ad featuring the rapper Ludacris. Bill O’Reilly called for a boycott of Pepsi because he felt the company used an “immoral rapper” as a spokesperson (Russell, 2012). After the controversy, Pepsi committed to paying $3 million dollars to the Ludacris Foundation (Russell, 2012). With a popular rapper, such as Ludacris, who has millions of fans, this controversy created the risk of Pepsi losing millions of consumers, which could have switched over to the competition, Coke.

In the future, the part of Coke’s corporate culture that will probably change is their leadership. Companies change leaders often, especially when the current leader is not performing to the standards that the company expects. In order to continue to thrive, Coke has to be sure that they put leaders in place who understand the company’s vision. They must be able to take those visions and continue to move the company forward in its market. Coke has been a leader in the cola market for many years and as a new leader, it will have to be the goal of that leader to ensure that Coke remains at the top of the market or Coke will have to find a new leader. If Coke constantly has to change leadership, then it will affect the company. Finding a great leader is not an easy task, but once that leader is found it is up to him/her to effectively lead the company into the future and not ruin everything that has been built before they came along.

Pepsi’s believes in blazing new trails, and thus far it has worked for them. In the future, Pepsi must be careful that by blazing new trails they do not forget what has allowed their success over the years. Although the new trails that they tapped into in the past have worked, there is no guarantee that it will continue to work in the past. There have been companies, like Coke, that have tried new products (New Coke) that did not work. Pepsi has had success with tapping into new markets, but the company must be careful that they stick with what has worked for them so that they do not tarnish the brand that they have worked so hard to establish. The different markets (water, juices, teas, and sports drinks) that have been tapped into has brought Pepsi much success, and instead of blazing new trails, Pepsi needs to focus on making their current product lines bigger and better. Tapping into other markets that they are not already a part of could possibly take away from the product lines that they already have in place.

Conclusion Coke and Pepsi are the top cola and soft drink companies and each other’s biggest competitor. Both companies have established themselves using different methods, but they both have had success with these methods. Coke has clearly won the rivalry between the two when it comes to the individual cola lines, but when it comes to overall revenue; Pepsi has won the battle of revenue. Although both companies have made mistakes over the years, both have continued to be successful. Coke has stuck with what has worked for them throughout the years, which is the cola and soft drink market. Pepsi on the other hand, tried different markets, and was very successful. These two companies will continue to be rivals from now until the end of time because they are both at the top and continue to fight to make sure that is where they stay. 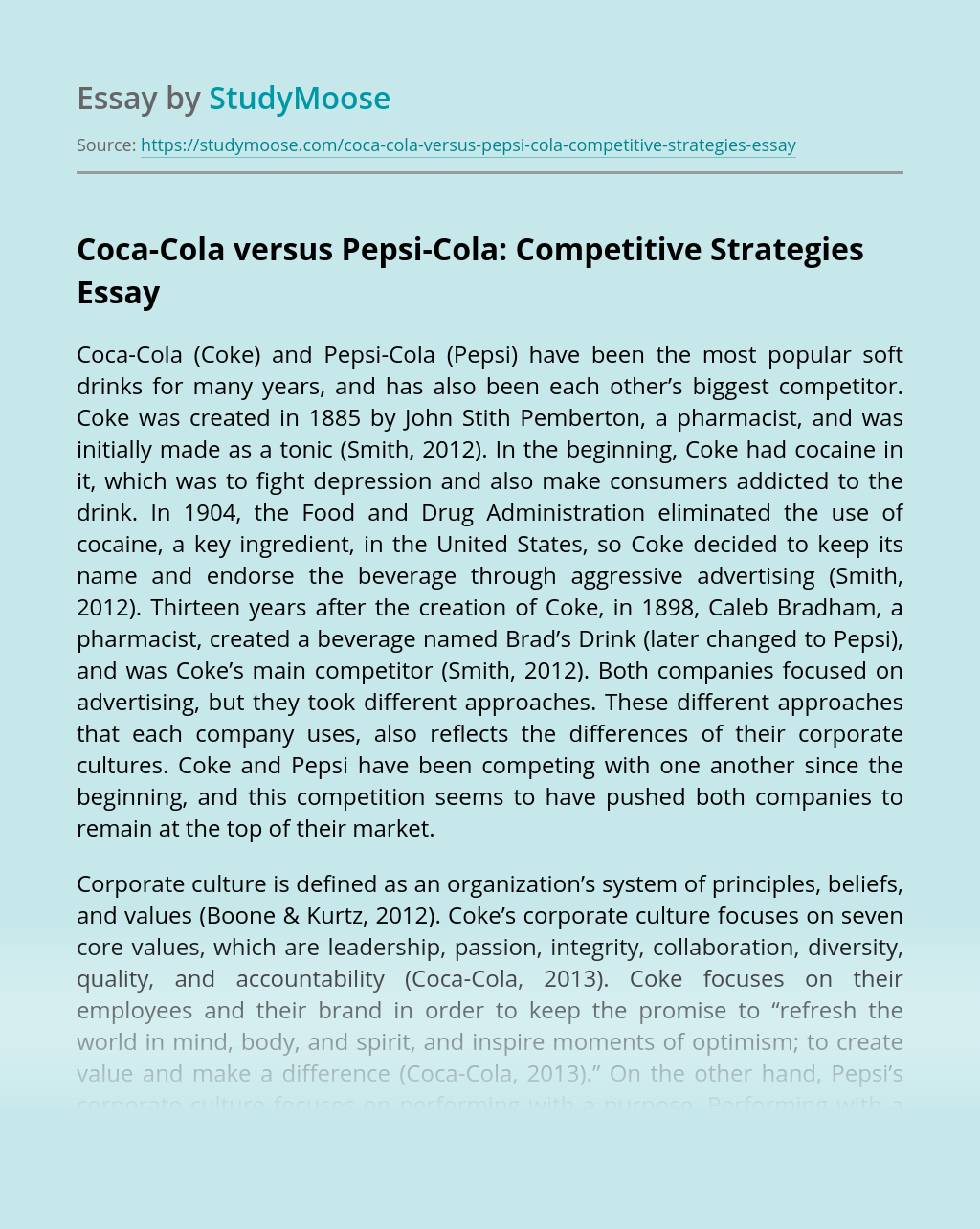