In May, 1886, Coca Cola was introduced by John Pemberton a pharmacist from Atlanta, Georgia. John Pemberton started brewing his coca cola formula in a three legged brass kettle in his backyard. Pharmacists Caleb Bradham in New Bern, North Carolina first made competitor Pepsi in the 1890’s. The brand was trademarked on June 16, 1903. These companies have brand identification and customer loyalties that have made them a historical landmark. Today Pepsi and Coke control around 90% of the soft drink market, making it one of the most well known oligopolies in the U.

Don't use plagiarized sources. Get your custom essay on
“ Pepsi & Coke: Related to Game Theory ”
Get custom paper
NEW! smart matching with writer

S. An oligopoly is a market dominated by so few sellers that an action by any of them will impact both the price of the good and the competitors. Some characteristics of an oligopoly are:

* A few large firms dominate the market, i. e. they have a substantial market share. There is a mutual interdependence among the dominant firms; this means that competition is personal and each firm recognizes that it’s actions affects the rival firms and theirs affects it. Economies of scale deter entry by forcing the entrant to come in at a large scale and risk strong reaction from existing firms or come in at a small scale and accept a cost disadvantage. Barriers to entry are high in the soft drink industry because both soft drink companies and bottlers are factors in entering this market.

These two parts of the industry are extremely interdependent, sharing costs in procurement, production, marketing and distribution. Many of their functions overlap; for instance, Pepsi can do some bottling, and bottlers conduct many promotional activities. The industry is already vertically integrated to some extent. They also deal with similar suppliers and buyers. Entry into the industry would involve developing operations in either or both market segments. Beverage substitutes would threaten both Peps and their associated bottlers.

Because of operational overlap and similarities in their market environment, we can include Pepsi, Coke and bottlers in our definition of the soft drink industry. This industry as a whole generates positive economic profits. Pepsi and Coca-Cola are dominant firms in this market, controlling approximately 90% of the market share. There is also a mutual interdependence among the dominant firms, so for every change Pepsi makes in marketing strategies, price increase and/or brand expansion, Coke is affected by it. Figure 1 shows the demand curve.

The point of the kink is the point of the established market price. The kink of the demand curve suggests that a competitor would react asymmetrically to price increases and price decreases by the firm. Taking a look at the soft drink market, where Pepsi and Coke combined have over 90% of the market share. Suppose the price is established at $1. 99 for a six-pack of either Pepsi or Coke. Let’s consider the demand curve for Pepsi. If Pepsi increases its price to $2. 49 per six-pack, it will lose some of its market to Coke along the AB component of the demand curve in Fig. 1.

Pepsi will be able to sell 500 six-packs a day instead of the original sales level of 1000. Coke is likely to stay at $1. 99 and enjoy the additional sale, as some people who were originally buying Pepsi will be switching to Coke. Figure [ 1 ] If Pepsi lowers its price to $1. 49 to gain an advantage over Coke and increase it sales to 1500 six-packs, it may not succeed. The increase in sales by Pepsi to 1500 can only happen if Coke did not react to Pepsi’s price cut. However, Coke is likely to match the price reduction by Pepsi to protect itself against loss of market share.

As the result of price cuts by both Pepsi and Coke, there will be an increase in sales by both, at least partially at the expense of smaller competitors. In our example, the sales of Pepsi increase to 1300 six-packs per day from the original 1000. This is along the BC segment of the demand curve. Therefore, there are two demand curves facing Pepsi, AB for price increases and no reaction by Coke, and BC for price decreases and price matching reaction by Coke. This explains the kinked demand curve for Pepsi and similarly for Coke. Notice that the kink in the demand curve is at the established market price.

It is also important to realize that the established price tends to be maintained. Neither Pepsi nor Coke will be inclined to raise their price since it would cause loss of sales and market share to the rival. Also neither of them is particularly interested in lowering the price and starting a price war since the outcome is loss of profit for both in favor of consumers. Figure 2 shows us profit maximization under an oligopoly. If we add to the demand MR model the cost curves for a firm such as Coke and Pepsi under oligopoly, we would be able to determine the profit maximization level of output.

Figure [ 2 ] The profit maximizing level of output is 1000 six-packs of Pepsi, where MC = MR. Pepsi can sell this quantity at $1. 99 according to the demand curve. The average total cost of production at 1000 level of output is $0. 99 per six-pack. Therefore the company is making $1000 a day of excess profit as illustrated in figure 2. Moderate changes in the cost conditions of oligopolies do not cause a change in their profit maximization quantity and price as long as they are in the vertical range of the MR curve.

This implies that technological improvements that lower the cost of production or change in the price of inputs encountered by an oligopoly would not lead to a quantity or price change. Therefore it’s suggested that under an oligopoly market prices are rigid. Firms especially avoid lowering their price from fear of igniting a price war. Instead oligopolies resort to non-price competition such as advertising. Price wars can and occasionally do occur when one of the dominant firms in the oligopoly market experiences a significant decrease in its production cost and attempts to increase its market share. 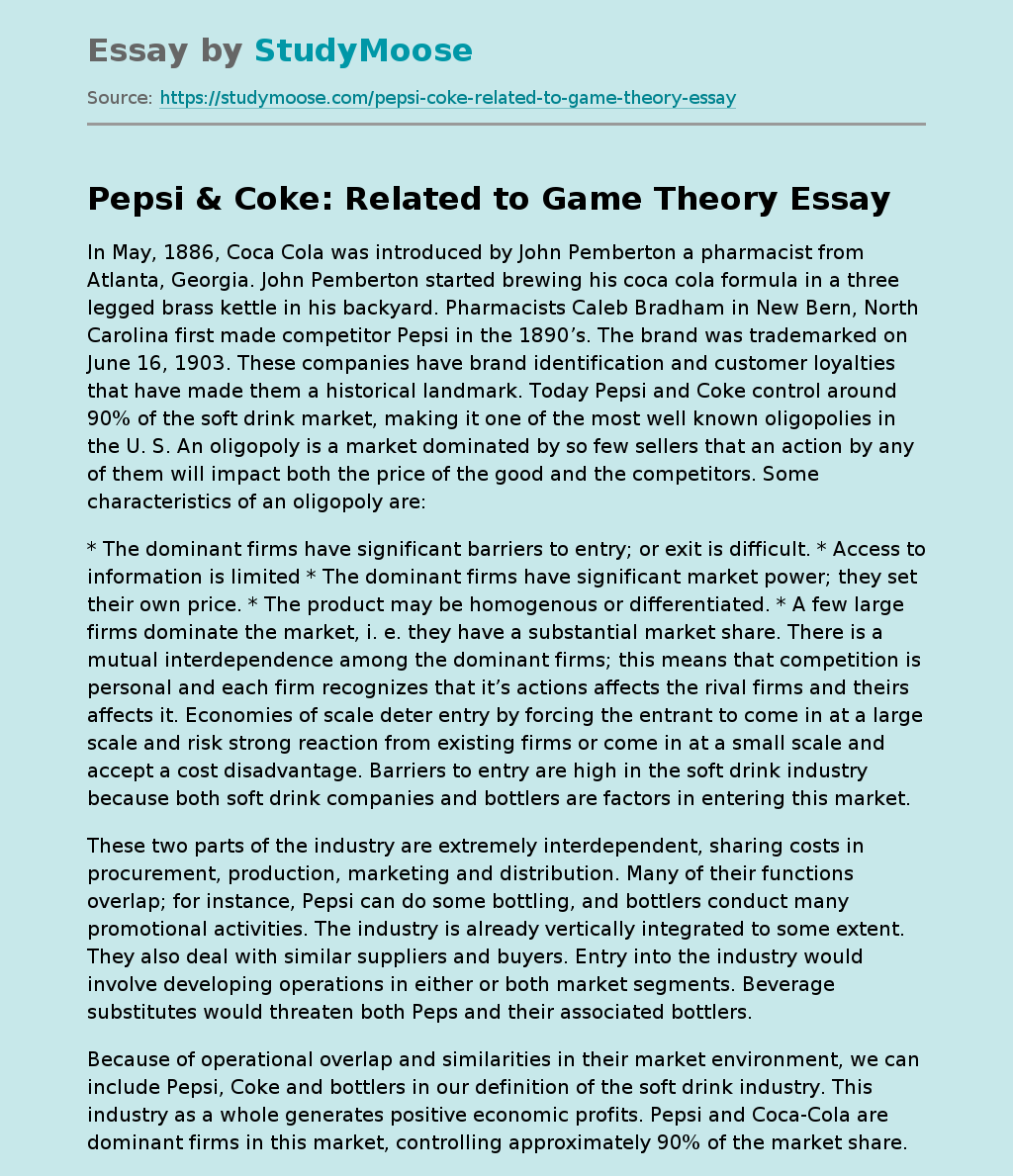