The lands arounf the Mediterranean Sea and most of the land in the Northwest Europe consists the Roman Empire. The life of Romans was very comfortable. There was indeed a beautiful way of living life. They have water and sewage system which enables them to have clean water. They have theaters and they also have public baths. The people who are wealthy lives in villas or mansions or big houses and they can afford to have a central heating system in their house.

Don't use plagiarized sources. Get your custom essay on
“ Pax Romana ”
Get custom paper
NEW! smart matching with writer

Roman Empire’s greatest part was the Pax Romana which is also called as Pax Augustea.

It happened around 27 B. C. after the several Republican Civil Wars and it ended in 180 A. D. In english, Pax Romana means Roman Peace wherein it was a period in the Roman Empire where it refers to the empire in its height of success. Aside from reaching the height of success and glory, the Pax Romana Era which is also called as Pax Augustea was also a time of civil order in the empire.

Although there are still foreign wars and rebellions are still on going, the interior or the main empire was free from being invaded.

This era was a time of peace and order in the empire. The Roman Legal System was used to attain peace and order in the provinces. At the same time, arts and architecture flourished althroughout the land and there was indeed a stable and well economy. This was the time that Greek and Roman culture was known in the whole empire thus, the flourishing of several aspects of the Roman culture was developed and was known by every people.

There were several developments during this Era. Rome turned in an empire and an emperor rules over the whole land.

The emperor hired full time workers who will carry out his policies and at this time, government in the province was improved because of the legal system. They follow the same law which made the whole empire organized and this kind of law is what was used by wertern societies in present. The concept of Pax Romana is far different from the peace we have in our contemporary society. The contemporary Society or the Modern Society viewed peace perhaps as a period of rest and absence of conflicts or problems in life.

At the same time, the modern world looks at peace as a sign of freedom and escape from worldly things and ideas while Pax Romana was a time of success, absence of war in the main empire and developments. The use of peace in Pax Romana is quite misleading because it did not really mean peace but rather development. Pax Romana was characterized by great Romanization and development of the empire and not by the absence of war and silence. In the contemporary society, peace would mean of relaxation and absence of conflicts. 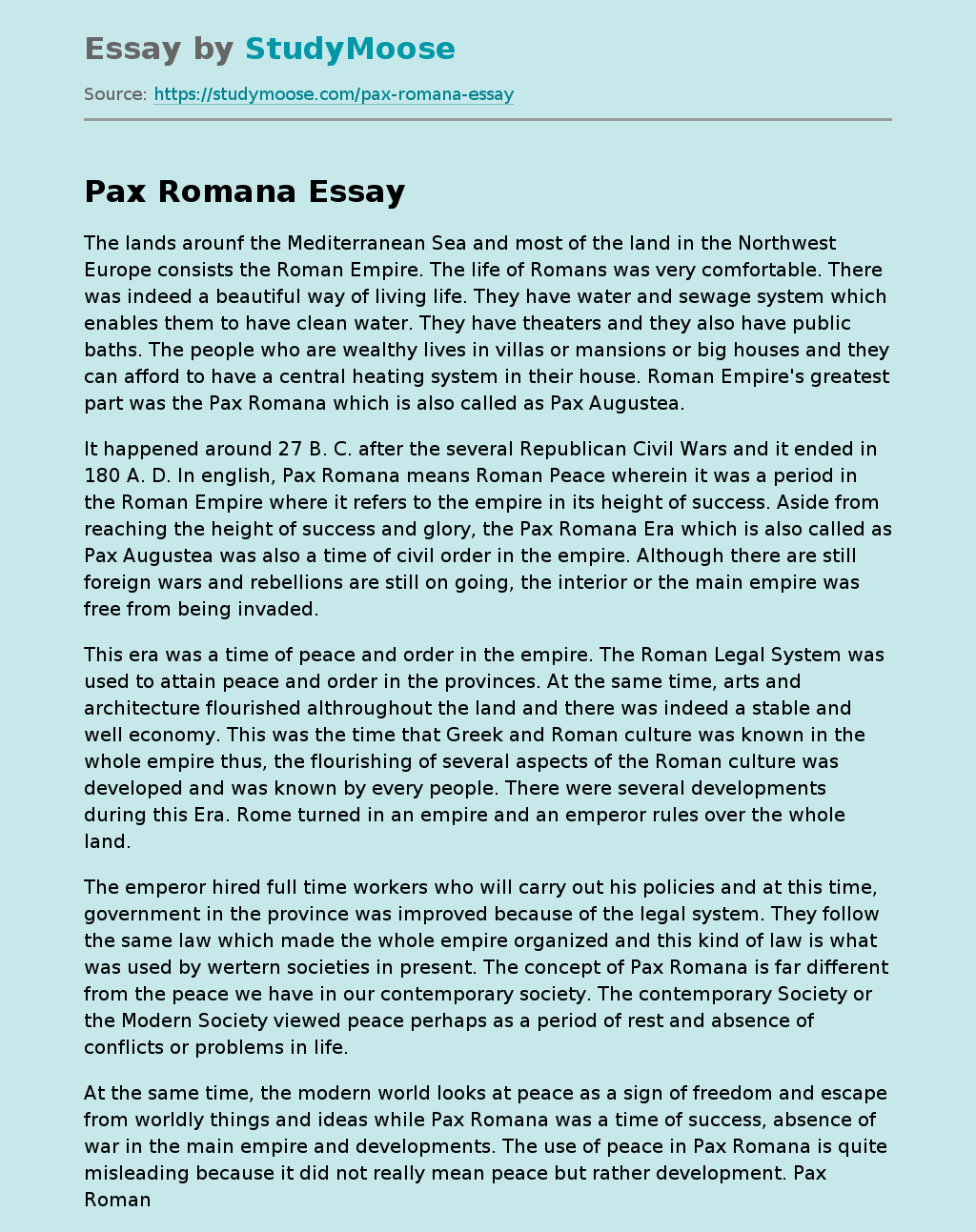