?The Rise of Christianity in the Roman Empire

The story of Christianity’s rise to prominence is a remarkable one but also blurry one. As far as historical fact about the beginnings of Christianity that is. Many scholars point to the time around 4 BC as the most likely period for Christ’s birth, but that is also uncertain. Likewise the year of his death is not historically accurate or clearly established. It is thought to have taken place sometime around Ad 26 through AD 36. Christianity as a religion faced many years of persecution and punishments, sometimes even death.

But, over the course of a few hundred years, despite all of this, the small persecuted religion of Christianity rose to become the dominant religion of the Roman Empire (Adler).

Based off of historical texts Jesus of Nazareth was a very easy going laid back religious teacher and later a Jewish leader. Raised the earthly son of a carpenter, he did not come from high class society(Rise). He was just a normal, religious boy from next door to those who knew him growing up.

It was only later that the Christians began to believe he was the Messiah, which is the human personification of God. Although there is little historical text about his early life more is known about his later years during his time as Messiah. He was clearly not one of the Jewish zealots who sought to overthrow and push out Roman rule in the land but, the Roman rulers did see him as a threat to security. It is known that Jesus did denounce the priests that Rome had appointed in charge of the religious sites of the Palestine(Lunn).

This denouncement could have been perceived as an indirect threat to Roman rule by Jesus. This threat coupled with the fact that he was becoming known as the “King of the Jews” is why he was condemned and sentenced to death. The Roman leaders saw his death sentence as the closing of a chapter on a minor problem before it became a major nuisance and came back to bite them in the behinds. Therefore, it can be concluded that the crucifixion of Jesus of Nazareth was nothing more than a political decision based on political motivations(Paulgaard). Whatever the importance his death was to the Roman leaders is went hardly noticed by Roman historians. To them his death was no more important than a street beggars.

It can be assumed that the Roman leaders who agreed to his crucifixion thought that his teachings would die along with him or shortly thereafter(Lunn). They must have been furious when his very loyal and determined followers didn’t allow that to happen. One of their own Roman citizens, Paul (known as Saint Paul) proved to be the most effective in caring on spreading the word of God the way Jesus himself did. He was a devout follower of Jesus and believed that if Jesus was willing to die for the sins of mankind and for his beliefs then it all must be true. Saint Paul became well known for his missionary trips that took him from Palestine into the Roman Empire (Syria, Turkey, Greece, and Italy).

He carried only his teachings of Jesus new religion with him and spread the word to the non-Jews(Lunn). Up to this point in history Christianity was only known as a small Jewish Sect. It was Paul who took this new religion and the story of Jesus the Messiah to the masses. Most of the biblical scriptures of the new testament were written after the death of Jesus so there would have been very few available to him to use. The actual outlines of his new religion of that day is relatively unknown so Paul’s teachings and preaching would have been on the general ideas of Jesus and his ideas of Christianity such as the firsthand knowledge Jesus said he had of his holy father being the one and only God. It was Christianity’s insistence of one all-knowing and all-powerful God and others teachings like it that led to the Roman’s feeling threatened.

Roman authorities waited for quite some time before deciding how to best approach and deal with this new religion. In the mean time, Paul and others like him were picking up so many followers so fast that the Roman leaders began to think of Christianity as a cult(Paulgaard). The Roman Empire had for so long kept it guaranteed religious peace due to the principles of religious toleration most of all Christianity was in direct defiance of the “official state religion of the empire.” To top it all of Christians refused to perform Caesar worship, which was required of all citizens of the Roman Empire, and this more than anything else proved of the Christians disloyalty to their Roman rulers.

Finally, in AD 64 Roman authorities got an answer to the question of what to with the followers of Jesus and Christianity ,when Nero’s bloody repression led to the persecution of the Christians(Rise). This repression ,though rash and short lived, was a significant historical event. After the repression and upon learning of the Christians refusal to perform Cesar worship, the Roman emperor Domitian sent investigators to Galilee to questions the family of Jesus. They released all they questioned without charging them but just the fact that the Roman Emperor had taken interest in this small Jewish sect proved that Christianity was no longer merely just a small Jewish sect but a force to be reckoned with.

It was towards the end of the 1st century that Christians finally severed all ties with Judaism and established themselves as their own religion(World). They were Christians and they were independent of all other religions. After the separation Roman authorities no longer had them on radar. They didn’t know who Christians were independent from Judaism. The fact that Christianity was now unknown to the Roman Empire led to all kinds of rumors about this new sect. There were all kinds of rumors that Christians were performing all kinds of secret rituals such as child sacrifice, incest and even cannibalism. This led to major bad publicity ,so to speak, for Christians. During the 2nd century AD Christians were once again persecuted for their beliefs. The biggest reason this time was because Christianity did not allow their members to give the statutory reverence to the images of the gods and of the emperor.

Their gatherings then became considered a civil disobedience and a transgression against the edict of Trajan. The edict of Trajan forbade meetings of secret societies and since the roman authorities considered Christianity a cult, that was a secret society(Lunn). The next serious persecutions were those under the rule of Marcus Aurelius. This period defined the Christians understanding of martyrdom. Following a period of widespread toleration of the Christians by the roman authorities after the persecution by Marcus Aurelis, Diocletian enacted what was to become the greatest persecution of Christians under Roman rule. He and Caesar Galerius launched a purge against the sect. They saw the Christians as becoming far too powerful and so in turn to dangerous.

AD 312 marked the beginning of a new era in the history of Christianity under Roman rule. Emperor Constantine had a vision of the sign of Christ in a dream on the eve of a battle with his rival emperor Maxentius. The vision told him that he was to have the symbol inscribed on his helmet so he did. He also ordered all of his bodyguard to paint in on their shields. After his victory in battle he declared that he owed his victory to the God of Christians. Constantine already had a tolerant attitude of the Christians that he had gotten from his father but before that night he had never indicated that he would be on their side(Paulgaard). His vision changed the fate of Christianity for good. Constantine secured religious toleration towards Christians all over the empire. It was in AD 324 that he defeated his last rival emperor and his final religious restraint disappeared that he became the first Christian emperor that ruled over the entire empire. He saw to the construction of many great churches and great monuments to Christianity. He also became openly hostile toward the pagans and sought out to confiscate their treasures.

The items confiscated were later given to the Christian Churches. Citizens of the Roman empire never really were even given time to work into Christianity, they were just kind of shocked into it by Constantine saying I am ruler and what I say goes. Following Constantine as ruler was Julian. When he took the throne he immediately renounced Christianity but could do little to change it as Christianity by then dominated the religious make-up of the empire. After years of trying to establish what was and was not part of the Christian religion in was the emperor Theodosius in AD 380 that took the final step and made Christianity the official religion of the state(Lunn). There were ups and downs for Christianity in the Roman Empire following the decision to make it the official religion, but no matter who argued against it, the fact was that Christianity was there to stay.

The road for Christianity from a small Jewish sect to the official religion of the Roman Empire was a long and deadly one paved with the loves of many a Christian, starting with the life of Jesus of Nazareth. Jesus start out with the goal of spreading the news that there was only one God and that he was a loving, forgiving, and faithful God. Roman authorities from first learning of Christianity, sought to destroy it. They wanted no part of a cult that didn’t bend to their will because they could not control them. Many Roman’s thought that by threatening and then following through with killing Christians, they would renounce their faith in their God. But, they didn’t. It took a very long time and many, many deaths and persecutions for one Roman emperor to stand on the side of the Christians. Had it not been for Constantine and his vision, Chrisitanity may not have gotten to where it is today. It is not only to official Roman Empire’s religion it has become the most well known and most practiced religion among the western world to date. And it all leads back to one man who died on the cross for my sins.

4. Paulgaard, James. The Expansion of Christianity in the Roman Empire. University of Saskatcewan.1 April 1999. Worldpress.com April 22, 2014.

?The Rise of Christianity in the Roman Empire. (2016, Mar 09). Retrieved from http://studymoose.com/the-rise-of-christianity-in-the-roman-empire-essay 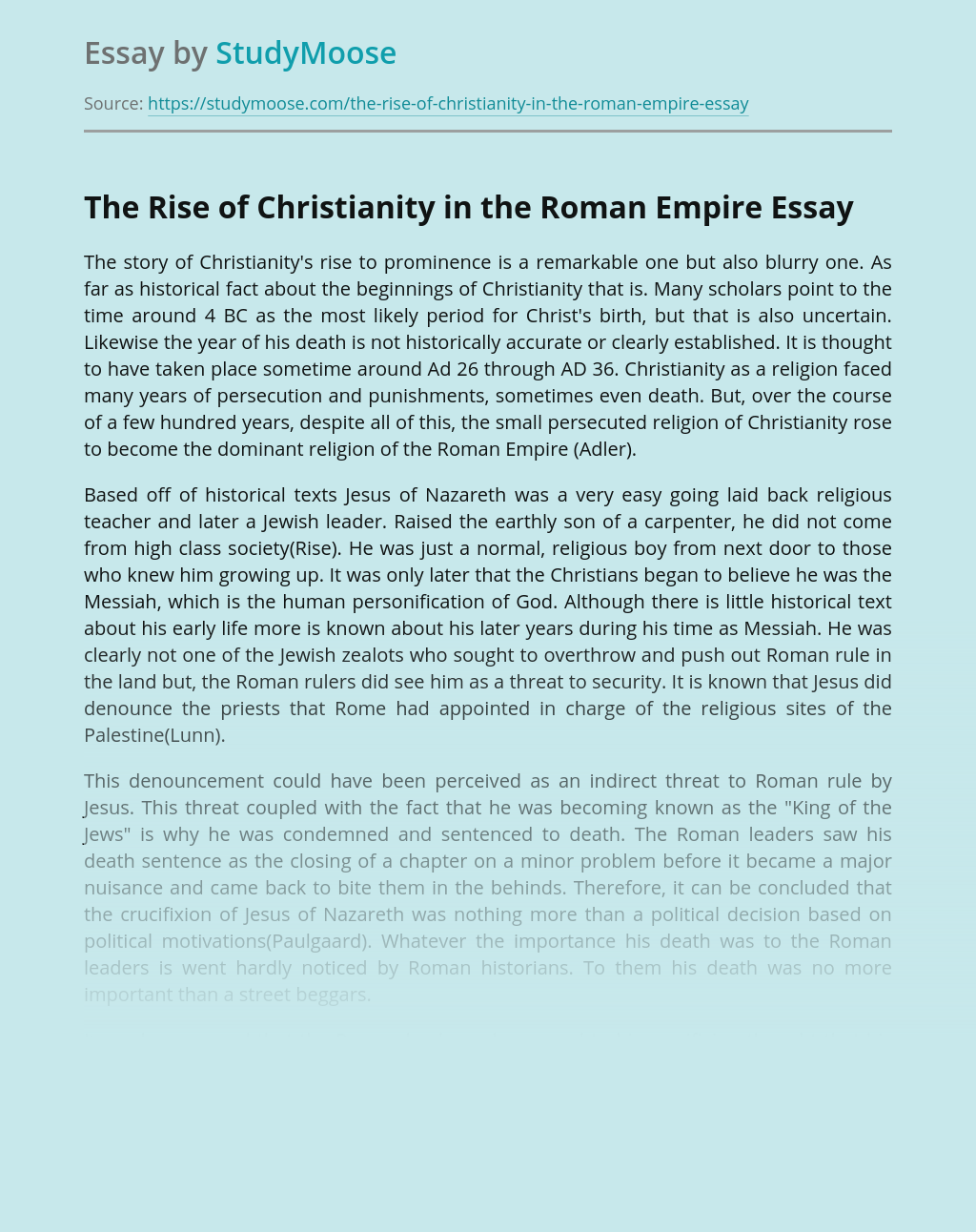 Don’t waste time
Get a verified writer to help you with ?The Rise of Christianity in the Roman Empire
Hire verified writer
$35.80 for a 2-page paper
Stay Safe, Stay Original