At a glance, if someone knows nothing about the painting Guernica by Pablo Picasso, it might look insane, unintelligible, and meaningless. However, the picture hides a broad meaning and history behind itself. Therefore, whether someone is interested in art or not, the analysis of the painting Guernica by Pablo Picasso might affect him or her deep inside.

An architect expresses his or her feelings by designing a building, a writer by writing the novel, and a composer by composing music. One of the most important artists of the twenty-first century is Pablo Picasso.

Don't use plagiarized sources. Get your custom essay on
“ The understanding of the meaning and symbols of the painting Guernica by Pablo Picasso ”
Get custom paper
NEW! smart matching with writer

He expressed his attitude, pain and deep sorrow regarding the war by
painting the picture Guernica. One might ask, what in fact is Guernica and how it is connected to Picasso. At the end of the 1930s, a civil war broke out between the Nationalists and Republicans in Spain. It had a great impact on the civilian life: the population was divided, and people who supported either side were oppressed, tortured, and even murdered for their political beliefs.

Guernica is a town in the Basque Country, northern Spain.

In April 1937, the town Guernica was bombed by Nazi Germany and Fascist Italian warplanes at the request of the Spanish Nationalists. Therefore, afterward, the weak Spanish Republican government authorize Pablo Picasso to create a special work for the Paris World Fair.

Pablo Picasso managed to illustrate his feelings so remarkably because they were in line with those of the authorities, the Republican Government. The painting`s power begins from its great size: it is approximately 3,49 meters tall, and 7,76 meters wide.

Picasso used some symbolic images as well as a cubism style to create the painting. There has been a lot of debates for the last sixty years according to the symbolism of the picture. However, one message is quite clear: Picasso`s attitude towards the war and the reflection of his thoughts and feelings in the painting.

When one looks at the painting, he or she might notice that it seems chaotic, and it is not easy to analyze it. A person might notice a woman on the far left, screaming in pain holding the body of her dead child. There are head and a body of the large bull on her right. It is the only uninjured and calm figure among the chaos and the death that one might see at the painting. There is a dead and wounded man beneath the woman: his one hand is cut off, and his blighted hand holds a broken sword.

Nonetheless, only his arms and head are visible – the other parts of the body are hidden by overlapping and disconnected parts of other figures. There are also three more women in the painting. One rushes somewhere; another one bends out of the window of the burning house. The third woman seems trapped in the burning building, screaming in horror and fear. All of the faces are misshaped in agony. Their mouths are open, eyes are strained, and their tongues have a shape like daggers.

Picasso decided to paint Guernica in a sharp monochromatic palette of gray, black, and white colors. On first glance, Guernica seems to be confusing and chaotic. However, probably it is the way Picasso wanted to throw the viewers into the midst of the rapidly brutal action. Everything is in flux. Images overlay and intersect, obscuring forms which makes it harder to distinguish their boundaries; however, in fact, there is a main visual order. Picasso organized the figures into three vertical groupings that move from left to right, while the center figures are constant within a big triangle of light.

There were a lot of debates about the meaning of the images in the Guernica painting. When Picasso was questioned about the symbolism of the picture, he just answered that it was an appeal to people about the murdered people and animals. Picasso said that “In the panel on which I am working, which I call Guernica, I clearly express my abhorrence of the military caste which has sunk Spain into an ocean of pain and death.” Picasso used the images of the horse and bull during his entire career as a part of the life and death ritual of the Spanish bullfights. Some people suppose that the horse and bull represent the battle between the Republican fighters and Franco`s fascist army. Nonetheless, the painter did not want to define the symbols. Picasso believed that the viewers had to interpret the symbols the way they understood them.

Finally, the painting does not have one exact meaning. Therefore, everyone might interpret the meaning and the symbols in their way. However, probably the ambiguity of the Guernica painting, the lack of its historical specificity, and the fact that, unfortunately, cruel wars continue to exist around the world, makes Guernica everlasting and relatable today as it was eighty years ago. The painting used to be located in New York City, and then at the Museo del Prado in Madrid.

Presently, it is located at the Museo Reina Sofia in Madrid, Spain. Nonetheless, Basques want to move the painting to the Guggenheim Museum in Bilbao considering the fact that the picture is closely related to the history of Basque.
Such masterpiece deserves your attention. We highly recommend you to plunge into the deep context of this picture. Be sure to Gin new emotions and realize some hidden facts of life.

The understanding of the meaning and symbols of the painting Guernica by Pablo Picasso. (2018, Mar 05). Retrieved from https://studymoose.com/painting-guernica-pablo-picasso-essay 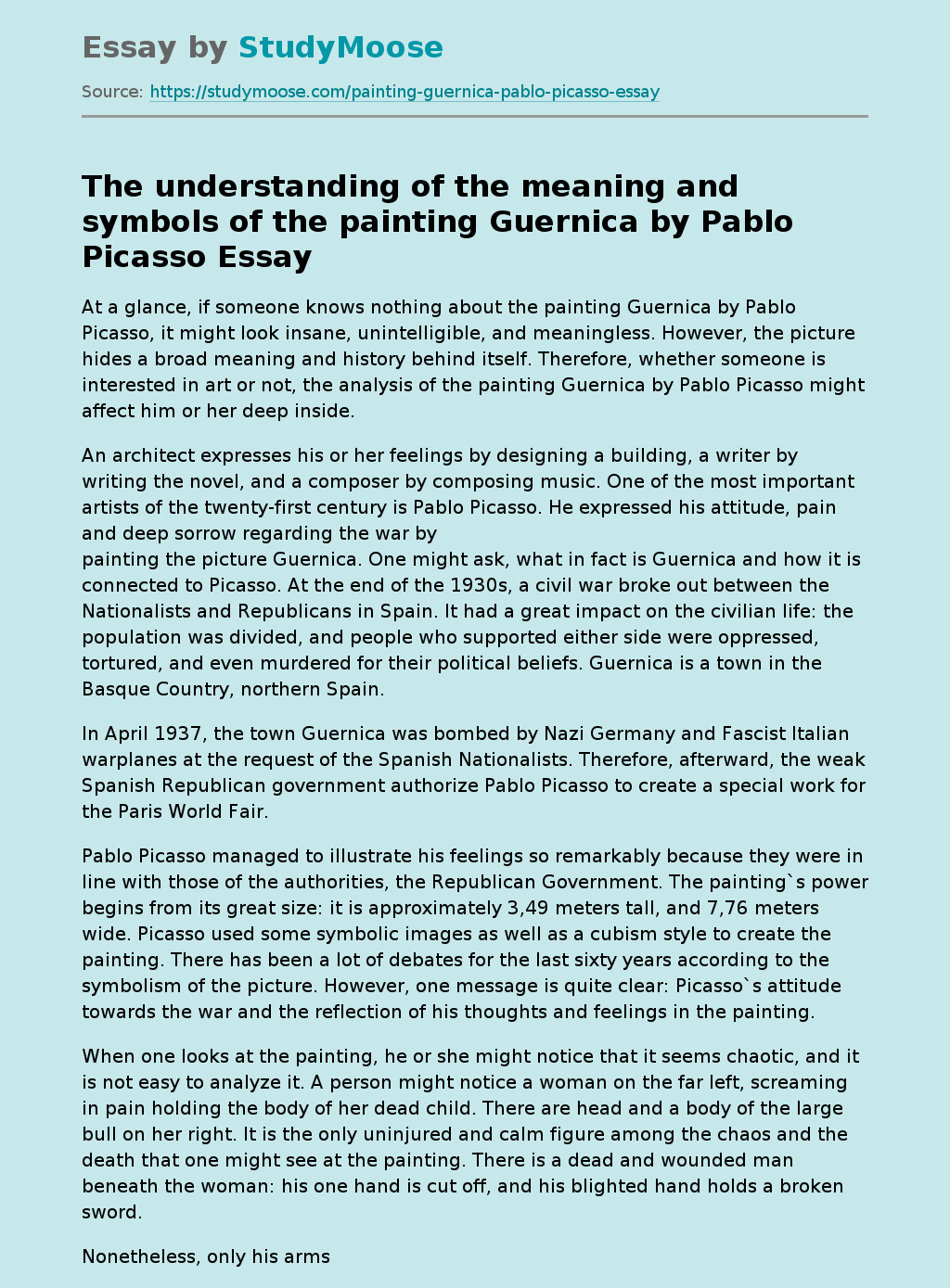