Ozymandias and Death the Leveller

“Death is a leveller”, this statement implies that death makes everyone equal or ‘level’. In the poems, “Ozymandias” by Percy Bysshe Shelley and “Death the Leveller” by James Shirley, they each portray this in similar ways. Each refer to this statement by using the notion of a powerful figure, who would seem to be ‘invincible’, forgotten through time, hence forth, making them equal to people who would have achieved very little within their lifetime.

In “Ozymandias”, Percy Bysshe Shelley relates a description of a mysterious land laid to waste.

Don't use plagiarized sources.
Get Your Custom Essay on Ozymandias and Death the Leveller Just from $13,9/Page

The speaker recalls having met a traveller “from an antique land,” who told him a story about the ruins of a statue in the desert of his native country. At the very beginning of the poem, Shelley creates a remote landscape, unknown by many therefore distancing the narration. The title “Ozymandias” refers to the great Egyptian King Rameses II. This unfamiliar name gives the impression to the reader that it will about someone anonymous though during his life, he would have been very influential on the world around him.

“Half sunk, a shattered visage lies” denotes the face of the statue damaged and worn throughout time, metaphorically, like his power lost though time. Shelley then describes the face of the statue more, ” whose frown and wrinkled lip, and sneer of cold command” implies that throughout this rein over Egypt, he was a forceful and merciless ruler and wanted to be known for that and sculptor himself, also makes show it is understood. “Which yet survive, stamped on these lifeless things” explains to the reader that even though part of the statue has survived the abuse from nature, it still means nothing as it stands in a desolate landscape undiscovered by many. This links back to his reputation’s destruction over time. However, Shelley adds “The hand that mocked them and the heart that fed” implying that even though he may have shunned those less powerful than him, in his heart, he did want them to survive in this ruling.

“My name is Ozymandias, king of kings: Look on my works, ye Mighty, and despair!” In this quotation, Shelley emphasises greatly the irony of this message scribed into his statue. Within Ozymandias’ time, this statue would have represented the fear he caused to his people and the power he possessed over them. Yet now, it lies crumbled and forgotten in the middle of a desert inhabited by no one with his city in ruins around him. Shelley expresses how even the mighty have no power of death and how they are forgotten. The following line says “Nothing besides remains”, as if Shelley mocks his once mighty power with a simple yet painfully truthful statement, showing that it is inevitable that nothing will make him remembered again.

“Round the decay of that colossal wreck, boundless and bare The lone and level sands stretch far away.” Shelley mentions the sand as level and stretching far away. Sand is related to hourglasses, used to measure time. He also says the sand is ‘level’ meaning that you could far around you and see nothing but the isolated environment around you. This links in with time making everything equal and making eventually forgotten, and how each piece of sand is indefinable from the other. Alliteration is used to create an effective rhythm within the last lines of the stanza. It creates a feeling of total certainty that this is how this statue, like Ozymandias’ reputation, will stand until it is worn away to become another grain of sand. This poem was written in the age when Napoleon Bonaparte was at his height of power, but Shelley believed this would eventually been his fate.

‘Death the Leveller’ was written by James Shirley the time when King Charles was reined over England. In that time period, many people did not wish to have a king; therefore, King Charles was eventually beheaded. The purpose of the poem was a warning to the King, showing that he had no escape from death, even with his courage a huge army. Shirley begins “The glories of our blood and state are shadows, not substantial things” denotes that how no matter how important your blood is or how powerful you are in life, death will make you as meaningful as a shadow, forgotten and neglected. Shirley then states how there is “no armour against fate” meaning that death is something you cannot escape, regardless of who you are within life. Shirley also makes death human like by saying it lays its “icy hand on kings”

Ozymandias and Death the Leveller. (2017, Aug 18). Retrieved from https://studymoose.com/ozymandias-and-death-the-leveller-essay 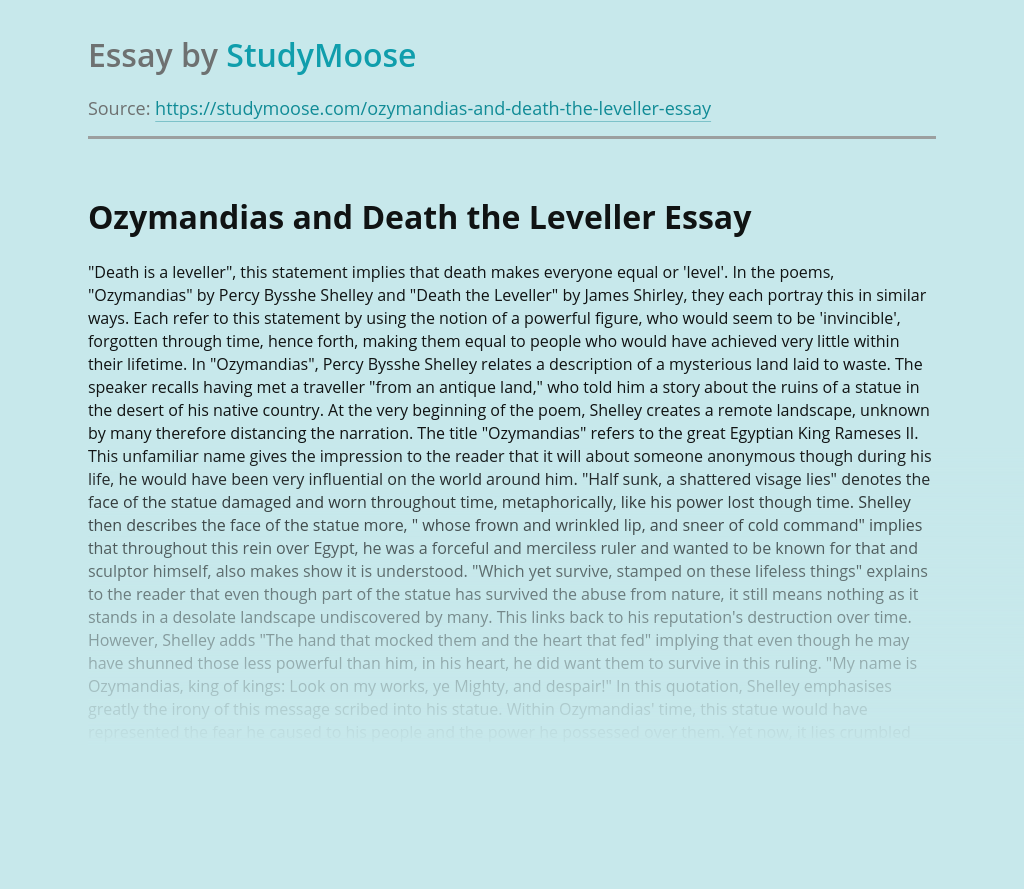 The theme of Hamlet: Death and Decay

Shakespeare’s play Hamlet is a well known and has actually been overly gone over about throughout the world. Discovering out just one theme of Hamlet has actually been an argument for a long period of time and lots of concur with me in saying that there isn’t simply one theme however many sub-themes that go...

The rapid and enormous expansion of Wal-Mart and its market share have changed the landscape of Main Street in towns and cities across America. By 1981, Wal-Mart became Americas largest retailer. It has approx. 6,700 stores worldwide, $345 billion in net sales (2007), and roughly 100 million weekly customers. Wal-Marts massive footprint has had three...

More often than necessary, the speaker makes several comments about how water plays an important role in sadness and death. Typically, water can be compared to tears of sadness and/or joy. The speaker uses this comparison and contrast to explain both the tradgedy and triumph of the death of Lycidas. The water imagery ‘fountain, flood,...

Pericles lived from 495-429 BC. During this time, religion was inextricably linked with Athenian society. It contributed to a lot of Athenian culture and the many aspects of religion were depicted through buildings, artworks, festivals and every day rituals. Gods and Goddesses In Greek mythology there were 12 main gods, that were prayed to and...