Power in ‘Ozymandias’ (page 14) and in one other poem from Character and voice: Compare

Bothe Ozymandias and The River God have a strong theme of power throughout the poems. Power in The River God is first present when the river says “But I can drown those fouls” The use of the word “can” brings out the power of the river. He has the choice over people’s lives and the river is not afraid to let us know this. The whole sentence sounds like The River God is trying to add fear to whomever he is addressing, showing them he is in charge and they should know this.

Don't use plagiarized sources. Get your custom essay on
“ Power in ‘Ozymandias’ (page 14) and in one other poem from Character and voice: Compare ”
Get custom paper
NEW! smart matching with writer

Ozymandias also attempts to bring out fear through his power. “My name is Ozymandias, king of kings: Look on my works, ye Mighty, and despair!” He is confident that he is more powerful than the mightiest and wants everyone to know this. The poet uses the word “despair”, in other words Ozymandias is saying look and be afraid. The word shows the worry and fear of those who lived in the times of Ozymandias.

Both Ozymandias and The River God believe they are more powerful than any other, they are both arrogant and do not see anyone as competition to their reputation. The River God says “O I may be an old foul river but I have plenty of go”. He is saying that even though he is worn down and old he is still as strong and mighty as he was when he was a young river. The use of the word “plenty” brings out his arrogance, he is not just saying he is powerful but he is saying he will carry on with this strength for years to come.

However in Ozymandias there is proof of his down fall, his loss of power. “Nothing beside remains” and “a shattered visage lies” are both evidence that even though he had all this power once he died it all left. The poet could have done this to show the reader that nothing lasts, everything has to end. The use of the word shattered is strong as it is almost like somebody defeated Ozymandias and that somebody was time. Also it is quite ironic that on the stone it was written “Look on my works” as none of them remained and therefore couldn’t of been as important as he made out.

Ozymandias is written to sound powerful when read out loud, iambic pentameter is used which gives the poem a regular sound.

Power in ‘Ozymandias’ (page 14) and in one other poem from Character and voice: Compare. (2016, Mar 21). Retrieved from https://studymoose.com/power-in-ozymandias-page-14-and-in-one-other-poem-from-character-and-voice-compare-essay 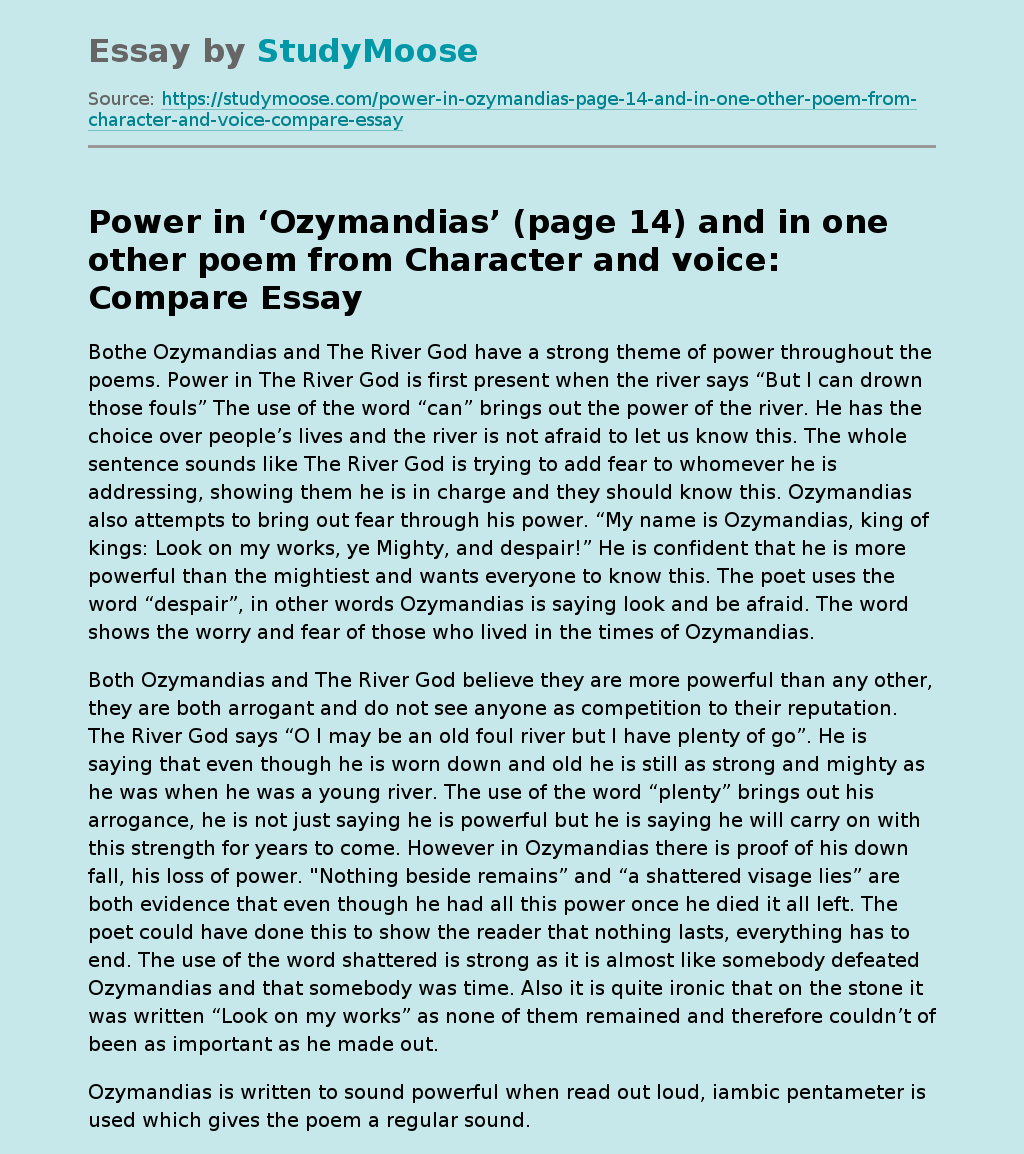