Worldviews Observed in the Film “A River Runs Through It”

People come from different parts of the world and possess different beliefs based on the way they were raised. It doesn’t matter where you are if you pay close attention you will notice there are many worldviews around you. The film “A River Runs Through It” is conveyed from a biblical worldview, however the film itself portrays another worldview as well.

This story is about two brothers named Paul and Norman growing up in Montana during the 1920s. Their father John is a Presbyterian minister and raises them based on his strong religious beliefs.

Don't use plagiarized sources. Get your custom essay on
“ Worldviews Observed in the Film “A River Runs Through It” ”
Get custom paper
NEW! smart matching with writer

The film also revolves around the brother’s and father’s love for fly-fishing. In the opening dialogue Norman says, “In our family there was no clear line between religion and fly-fishing.” He goes on to say that his father told them about Christ’s disciples being fishermen and how he and his brother Paul believed that John was a dry fly-fisherman. (Redford, 1992)

Aside from a biblical worldview depicted in the beginning a postmodern worldview is shown while the boys are running around and stop to look at some women who are standing outside what appears to be a brothel.

The boys are also involved in a scuffle with some other young boys. While Paul and Norman are raised in a religious home with very strict rules it’s clear that they are surrounded by people with different upbringings from theirs. Their day-to-day activities show how they interact with these people. It’s evident early in the film that the younger brother is somewhat of a rebel.

In a scene the two young boys are discussing what they would like to be when they grow up. Norman the older brother says he’s going to be a minister or maybe a boxer. The younger brother Paul says he’s going to be a professional fly-fisherman. Norman inquisitively asks “not a minister?” Paul demonstrates early on that he has a mind of his own. Once the boys reach their teens we see Paul getting a little more irresponsible. Paul has an idea to take a rowboat down the Big Blackfoot River rapids. He suggests to his friends and brother that they could make history if they survive it because it’s a dangerous thing to do. His brother is the only one that decides to join him. The next morning they are reprimanded by their father and told to go to church and ask God for forgiveness.

Norman is accepted to college and leaves for school 3,000 miles away. While he’s away Paul becomes a reporter for a newspaper in a town named Helena and also moves to that town. Six years pass by before Norman returns home in the spring. Upon his return his father hints to rumors about Paul.

One evening Norman receives a call to pick Paul up from jail. The desk sergeant tells him his brother’s been arrested quite often and is in debt due to gambling. Paul is no longer portraying the worldview he was depicted in early in the movie. Paul is starting to stray away from the morals and values he was taught by his father and the church. Norman tries to offer his brother some help for his current situation however Paul declines.

The careless choices Paul has made as a result of his new lifestyle eventually result in his demise, he is beaten to death. This movie depicts a very realistic picture of how we can stray away from our original worldview. In this instance it shows a young boy who was raised by His Word that becomes a man who decides to no longer follow His teachings. However the opposite can also be a reality for many people who don’t believe initially and then are called to serve the Lord.

Worldviews Observed in the Film “A River Runs Through It”. (2016, Feb 24). Retrieved from https://studymoose.com/worldviews-observed-in-the-film-a-river-runs-through-it-essay 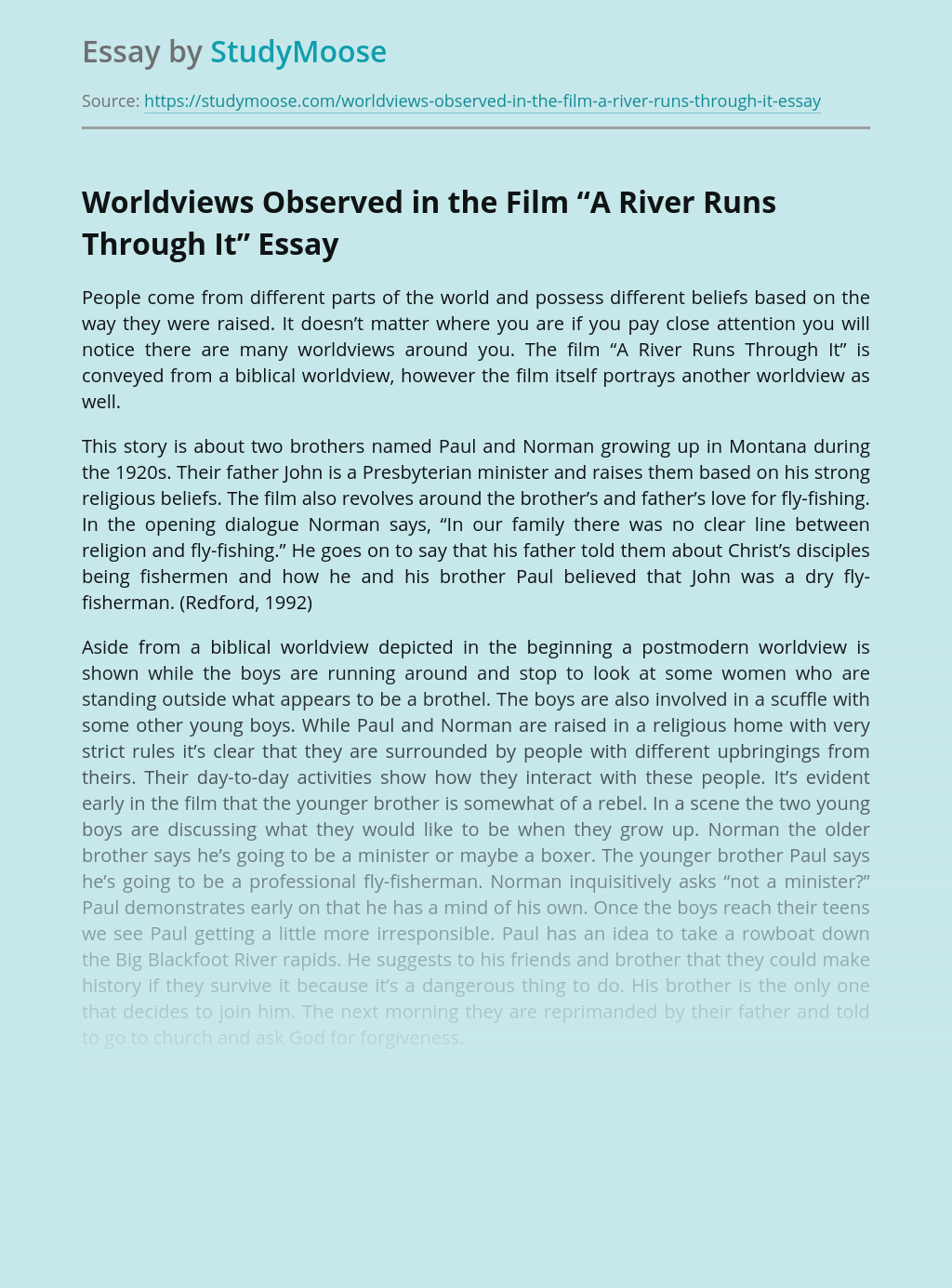