The message or theme of the poem of “Ozymandias” is that man is insignificant and his efforts are vain when compared to the forces of time and nature. Shelly expertly uses diction in the poem to portray important ideas. By encompassing time and nature into a theme Shelley brings a divine sense to the poem.

To consider the issue of the power of time and nature, the poet has the narrator reporting on a meeting with a traveler from ‘an antique land’ or Egypt, who told of seeing in the desert, the remains of a vast statue.

Don't use plagiarized sources. Get your custom essay on
“ “Ozymandias” Themes ”
Get custom paper
NEW! smart matching with writer

Only the legs remained standing. The trunk was missing and the shattered face lay half buried in the sand, he told that the sculptor had skillfully captured the ‘frown, the wrinkled lip, and sneer’ on the ‘shattered visage’ through ‘passions well read.’ The importance of this traveler is that of symbolism.

The traveler symbolizes the power that ‘Ozymandias’ has lost in his death. In health he was one of the most powerful people alive but now it takes a wandering traveler to spread a tale of the once great king.

The power of nature is well represented by this part of the poem also. ‘Ozymandias’ told his subjects to ‘look on my works; ye Mighty, and despair!’ however, thanks to the power of nature there are barely and works left to look upon at all, let alone despair upon! It can be seen that nature has destroyed his works in the quotes, ‘shattered visage’ and ‘sand, half sunk.

’ Thus the major theme of the poem is reavealed.

The statue is described as a “colossal wreck boundless and bare” drawing a parallel for the reason in which it was built. The condition of the stones, descriptively worded by Shelley, only emphasizes the despair drawn into the stone by the sculptor’s hand. By using words such as “frown”, “sneer”, and “mocked”, the author provides us with a slight portrait of “Ozymandias.” It gives us a picture of a powerful king with no motivation or reason to smile.

The phrase ‘cold command” portrays him as a militaristic leader that has seen more death and destruction than a whole army and has come to realize that even he is not able to compete with the Almighty. Shelley’s words “lifeless”, “decay”, and “wreck” apply not only to the statue the author is describing but also to the sculptor of the statue. These words encompass his entire being, and go far into bringing “Ozymandias alive in the reader.

Shelley cunningly uses Nature and time to bring in the “Mighty” one. God is the only being that has been around since time and Nature began. He represents what “Ozymandias” could not achieve and that is immortality. “Ozymandias” did however leave a mark on the world but in time even that too will be overcome by the relentless forces of Nature and time that is God.

In conclusion, the main themes of the poem are nicely summed up in mans insignificance to time and nature. Shelley also puts across the idea of despair superbly through delicate and subtle use of diction. 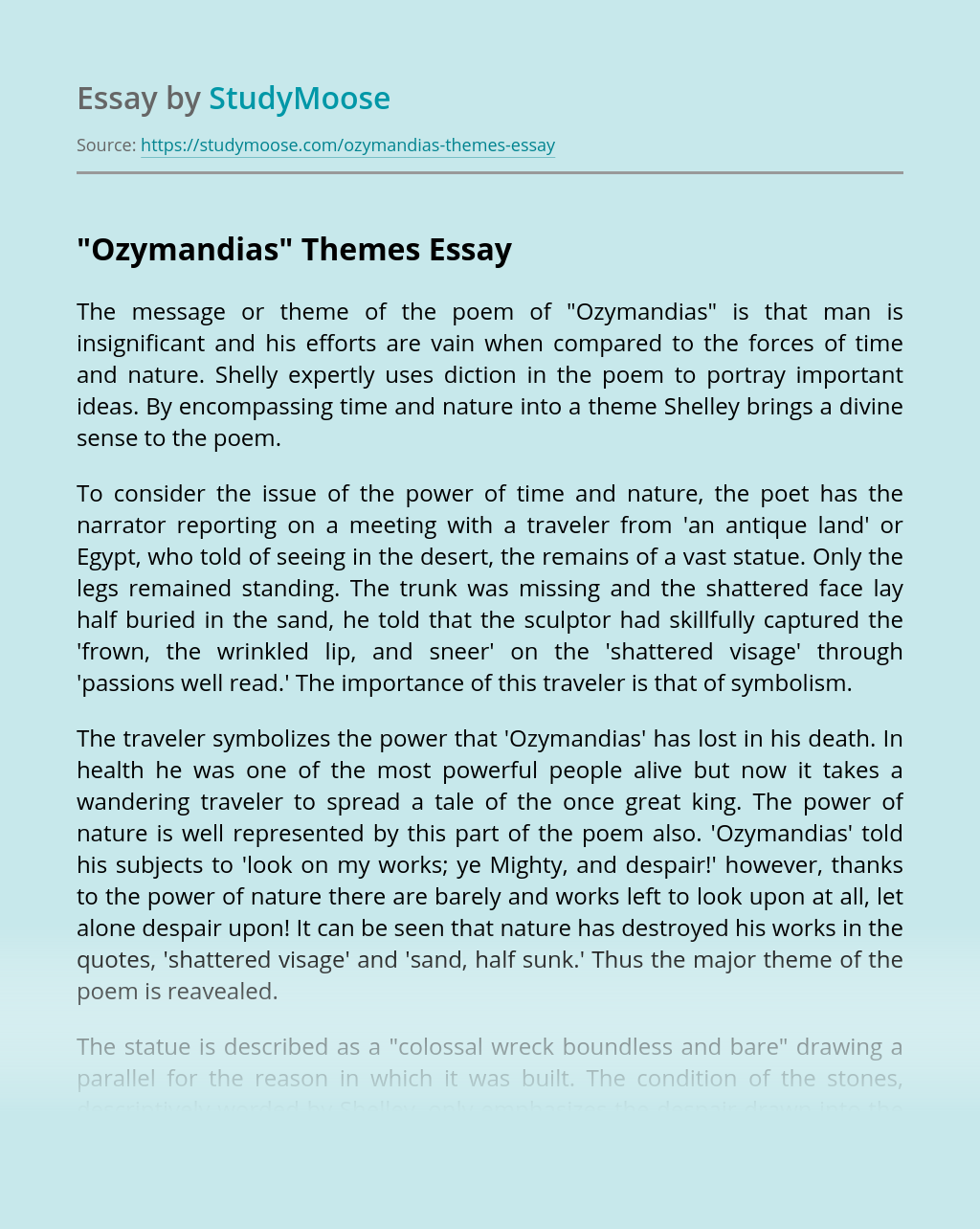