Compare the way the central characters are presented in ‘checking out me history’ by John Agard and ‘Ozymandias’ by Percy Bysshe Shelley. The poems ‘Checking out me History and ‘Ozymandias’ both use a wide range of various language and structure techniques to explore in great detail the central characters as well as their thoughts and feelings. The poem ‘Checking out me history’ uses various structural techniques to present the main character and to show his views, which also explains his frustration about not having a personal identity.

Don't use plagiarized sources. Get your custom essay on
“ A Poem Ozymandias by Percy Bysshe Shelley ”
Get custom paper
NEW! smart matching with writer

In contrast to this, the poem ‘Ozymandias’ uses more linguistic features to describe the deteriorating decline of the statue. In the poem ‘Checking out me history’ the language used in the poem helps to create a clear image to the audience that shows the characters frustration and aggressiveness by using nonstandard English. For example, ‘Dem tell me’ implies that no matter how much the character is told about English history, he will continue to rebel against English society to prove how proud he is about his own culture and background by using phonetic spelling.

This may help the readers to empathize with his thoughts and feelings. The non – standard English that is used throughout the poem also conveys how the character is representing himself through the language he is using. The almost sarcastic tone he uses to display his lack of interest in British history suggests that believes that black people’s history should be taught just as well as other cultures. Due to this poem not being grammatically correct, the audience are assured that the main character is unhappy with the way he has been taught through English education.

The phonetic spelling shows us a rebellious side to the character as he challenges society to balance out histories of many cultures equally. However, In the poem ‘Ozymandias’ the tone created by Percy Bysshe Shelley connotes the idea of past occurrences. It can create the image that power is only temporary, and it is not long before nature takes over.

The use of the words ‘frown’ and ‘wrinkled’ suggest the decline of the power that Ozymandias once had, or even ‘believed’ that he had. The use of the language throughout the poem creates a negative effect almost suggesting the significance of Ozymandias has now gone, and all that’s left is a statue. The use of the ‘!’ in the phrase ‘ye mighty,and despair!’ connotes the emphasis in the poem which helps the reader to understand how Ozymandias once expected fear from society or even envy. The poetic device of imagery is a similar comparison between both poems. In Ozymandias, Percy Shelley creates a memorable image of the statue which was once so great. The words ‘half shrunk’ and ‘shatter’d’ create the image of something that now is useless and has no significance what so ever, showing the deterioration of the statue.

In addition to this, the way the poet describes ‘Ozymandias’ in such detail reveals how the audience may feel no sympathy towards Ozymandias. ‘Sneer of cold command’ suggests the characters arrogance towards society and his disapproval of the public. In contrast to this, in the poem ‘checking out me history’ the main character speaks very highly of his culture and its past, unlike Ozymandias as throughout audience can understand how Percy Shelley believes it is wrong for society to be in favour and to follow of such a self -obsessed king. The stanzas in the poem ‘Checking out me history’ shows a strong link to imagery as the historical figures from the characters background have a strong effect on the reader. An example of this is when the character talks about someone he feels is inspirational in the 9th stanza. She is described as a ‘healing star’ and a ‘yellow sunrise to the dying’ which connotes how important this woman was, and how she is worth learning about. 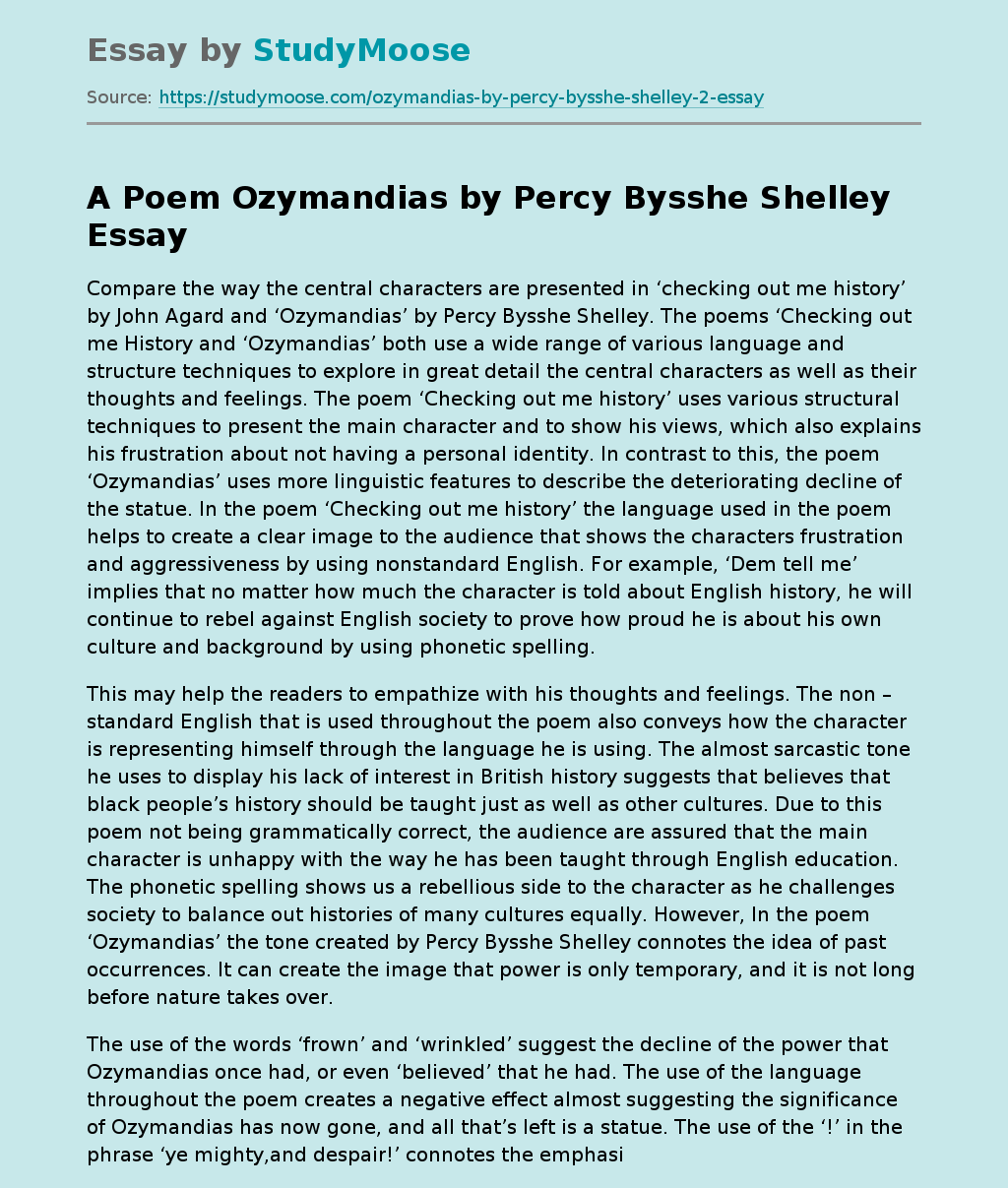