The Prelude is an auto-biographical, epic poem by William Wordsworth, ‘Mont Blanc’ by Percy Bysshe Shelley is a much shorter poem, however it correlates closely to a passage from Wordsworth’s epic where he describes a walking trip he took to Mont Blanc. There are some startling similarities between the two pieces, but at the same time there are sharp contrasts in the way that the scene is represented and the poets have conflicting views on what this beautiful landscape means to them.

A key theme in romantic poetry is a connection with the natural world, if we look at the ways that Shelley and Wordsworth represent nature in their work then some interesting contrasts can be seen.

The Prelude, subtitled ‘Growth of a Poet’s Mind’, is a narrative poem, showing us the events in Wordsworth’s life that have shaped his way of thinking and his views on nature and existence. The poem was written in blank verse, this form was reserved for epics and grand poems.

Right away this unrhymed form, and the iambic pentameter which it follows, lend the poem a grand and sweeping feel, creating a sense of importance and gravitas.

This passage is split into three sections; a broad description of the mountain and the vale below it, a strictly narrative passage where Wordsworth tells of how he and his friend were lost upon the mountain and crossed the Alps without realising, and finally a lyric interruption or ‘hymn’ (Romantic Writings p123 ) to ‘Imagination’ (The Prelude, Book Sixth l525).

First the speaker describes the setting, the natural world around him and how it effects his emotions, then he returns to the narrative, telling us of the event that has caused him to relay us this tale and finally he conveys to us the moral implications of the event and how it has shaped his ‘poets mind’.

In the first section the landscape is described as ‘wondrous’ (TP l456) the glacier as ‘a motionless display of mighty waves’ (l459) but the speaker is ‘grieved’ (l453) by what he sees, the ‘souless image’ (l454) of the mountain is not as beautiful or as wondrous as the ‘living thought'(l455) in the minds eye. The imagery used to personify the mountain and its natural beauty is epic and grand. Winter is like a ‘tamed lion’ (l466), ferocious, dangerous, but sedate and controlled, creeping down the mountain with a stately pace.

The pace of the poem quickens as the stretch of narrative begins’Descending by the beaten road that ledRight to a rivulet’s edge, and there broke off.’ (l503-4)The shorter words, repetition of plosive and hard sounds, internal partial rhymes (‘led’ ‘edge’) and the lack of imagery increase the tempo of this section. The tripping and jumpy sound of the lines, contrasts quite sharply with the earlier flowing sentences and sweeping descriptive passages.

The metre helps to create the feeling of ascending the mountain, it also lends the setting a sense of desolation and emptiness; there are rocks and streams and tracks but little else. This creates a sharp comparison with the beauty of the valley below. Finally this change in style also helps to create a build-up of anticipation before the anti-climax of realising that they have ‘cross’d the Alps’ (l524) unknowingly. As they are told that all their remaining ‘course was downwards, with the current of the stream’ (l519) the young men’s spirits flow downwards with it, as nature mirrors the emotions of the individuals viewing it.

‘Imagination!'(l525)… ‘ I recognise thy glory’ (l532). Underwhelmed by what the real world has to offer, the narrator can look back and see that imagination can usurp such disappointments. The ‘invisible world, doth Greatness make abode’ (l536), imagination can keep an individual in ‘hope that can never die’ (l540), and these lines seem to be saying that this transcends nature, that the human mind can imagine nature in all its perfection which can overcome the disappointments of the real world, and ‘Greatness’ capitalised along with ‘thy glory’ and the hymn-like nature of this passage suggest imagination gifted by a higher power. This point is where Shelley and Wordsworth’s treatments of Mont Blanc differ greatly.

‘Mont Blanc’ by Shelley is also written in Iambic Pentameter, lending it the same grand and solemn air as The Prelude. There is some rhyme throughout the poem although it is irregular, this helps to draw attention to certain lines, and phrases. Lines 25 – 28 form a rhyming couplet. Previous to this, the poem has spoken of ‘an old and solemn harmony’ (‘Mont Blanc’ l24), this couplet is that ‘harmony’. The rhyme and prosaic language lends this passage a lilting quality, emphasising the beauty and majesty of the nature it describes, ‘earthly rainbows’ (l25) and ‘aethereal waterfall’ (l26). When the rhyme breaks on the next line a pause is created, changing the atmosphere.

‘Wraps all in its own deep eternity’ (l29). Shelley has created a dichotomy to describe nature, the savage, awful power against the serene, calm and solitude. Shelley said that the poem “rests its claim to approbation on an attempt to imitate the untamable wildness and inaccessible solemnity” (Oxford World’s Classics edition (2003), the Preface to History of a Six Weeks’ Tour by Mary and P. B. Shelley). The speaker finds the landscape beautiful, like Wordsworth, but also sees a much darker savagery in the mountain. Regal metaphors are littered throughout the poem the spring of the river is ‘a secret throne’ (l17), the mountains around Mont Blanc are its ‘subjects’ (l62) and the river is ‘majestic’ (l123). The imagery used here emphasises the power of the mountain and its splendour.

In the third stanza where the speaker ponders on the creation of the mountain an unusual rhyming scheme is used. From lines 72 to 83 the scheme is ABCCADBDEFFE. While there is no distinct pattern the rhymes seem to gradually slot together, creating a feeling of increasing momentum, this places great emphasis on the final quatrain which directly addresses the mountain itself ‘Thou hast a voice, great Mountain'(l80). This random and unordered rhyme mirrors the unpredictability of the natural forces it describes, emphasising Shelley’s point that the ‘wilderness’ (l76) has no pre determined pattern or plan, asking the reader, like the mountain, to refute the ‘large codes of fraud’ (l81) that credit a greater design with its creation.

The beginning of the fourth stanza from lines 84 to 95 are concerned not with Mont Blanc itself but the cyclic nature of life and death. This whole section is one long sentence, filled with lists ‘the fields, the lakes, the forests and the streams’ (l84), uses of the words ‘and’ ‘that, and an ever increasing intensity caused by the language. We move from ‘forests’ to ‘rain’ then ‘fiery flood and hurricane’ (l87). Strings of alliteration keep increasing the pace of this passage ‘future leaf and flower’ (l90), ‘that detested trance’ (l91), ‘works and ways’ (l92) as finally it builds to a crescendo ‘Are born and die;’ (l95). Now the punctuation forces a pause and the following hard sounds and spondees of ‘revolve, subside’ put huge emphasis on this line as an ending point. Like the cycles of life and nature that this passage describes the momentum keeps building with great fury and passion until eventually it stops and subsides.

Similar imagery can be found to relate the two poems, both, for example, mention eagles in a setting of isolation, ‘A desert peopled by the storms alone, save when the eagle…’ (MBl67-8), ‘The eagle soareth in the element’ (TPl463), this shows that both poets have taken things from the natural world to create a certain atmosphere. Shelley and Wordsworth have used a variety of metaphoric imagery to relay the aesthetic wonder of the mountain, interestingly both have used other images from nature to define it, ‘Winter like a tamed lion’ (TPl466), ‘brood of pines around thee clinging, children of elder time’ (MBl20-1), ‘glaciers creep like snakes that watch their prey’ (MBl100-1). While both seem to keep the scene completely natural, there is a much darker edge to the descriptions in ‘Mont Blanc’.

The writing in The Prelude, while in the same form as ‘Mont Blanc’ is more stately and controlled; Shelley has tried to infuse his verse with more passion, to reflect his feelings on the wildness of the natural world. The tempo in ‘Mont Blanc’ seems to ebb and flow with the subjects that are touched upon, whereas in The Prelude, except for the narrative passage of the mountain climb, the progress is constant and measured.

Nature is clearly awe-inspiring to the narrators in both poems but the way they feel about nature’s relationship with human thought seems to be intrinsically different. Two sections that stand out when comparing the poems are the ones which describe the infinite scope of the mountain when compared to the human mind.

‘Some say that gleams of a remoter world visit the soul in sleep’ (MBl48-9)’when the light of sense goes out in flashes that have shewn to us the invisible world’ (TPl535-6)Shelley believes that a remoter world is the realm of imagination, that only those who are ‘wise, and great’ (MBl82) can reach while in a state of ‘trance sublime’ (MBl34). That nature has the power to help you understand the perceiving mind, you realise that the process of thought, like the water cycle of the mountain, or the circle of life, though invisible, is very real, and that this understanding can help us realise that any other ‘power dwells apart’, ‘inaccessible’ (MBl96-7).

Wordsworth gleans quite a different feeling from his experiences in the mountain. Imagination can transcend nature; the natural world can never match the ‘infinitude’ (TPl539) of the human mind. 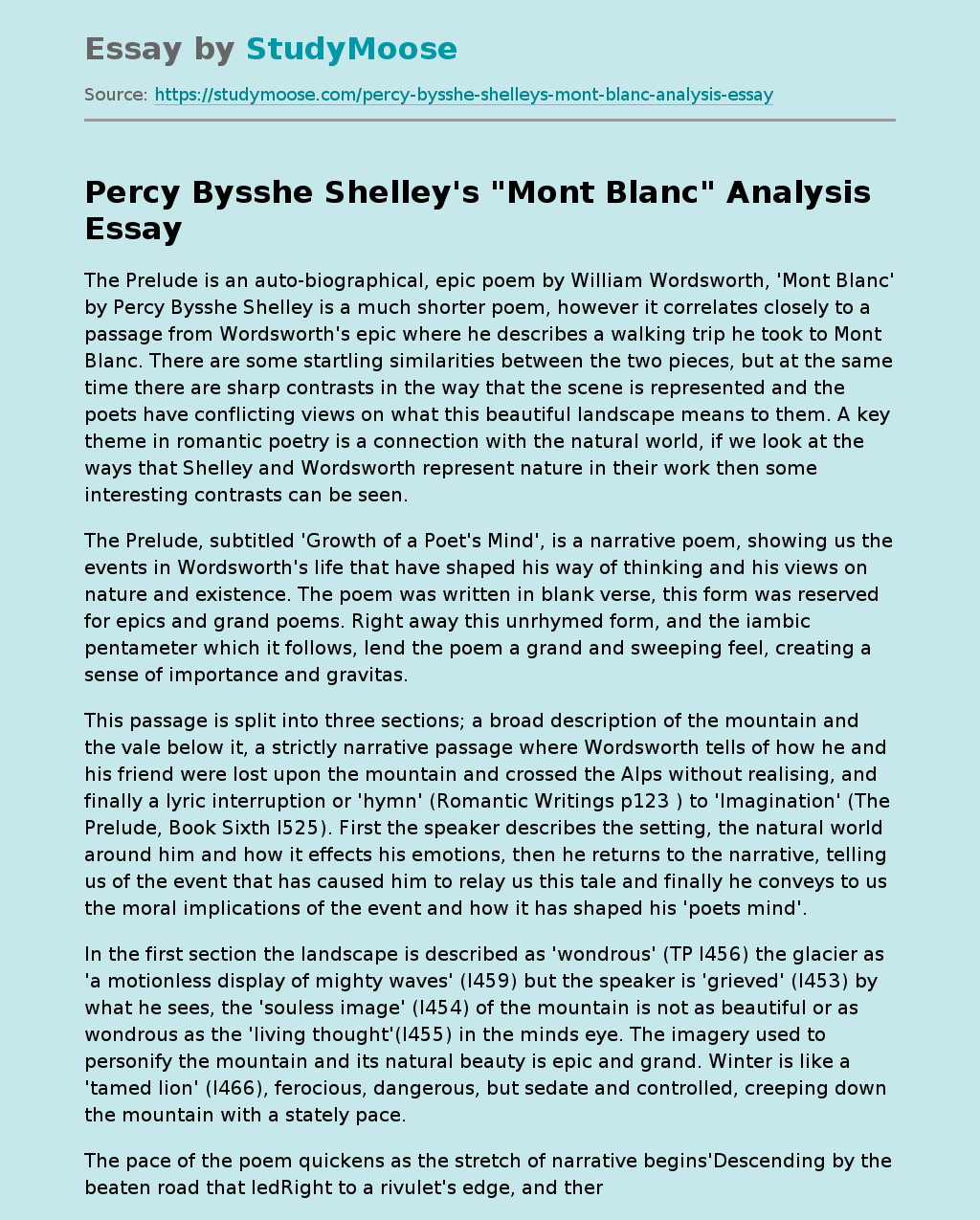