The book is funny and witty, effortlessly matching old mythology and tradition with modern culture in a way that makes the book engrossing and unpredictable. There is talk of gods having affairs with mortals, and quite a bit of married gods having affairs with other gods. In the following book report, I will first introduce the plot of the story. Then, I will talk about the writing of the author and the strengths and weaknesses of the books. After that, I will talk about the main character and other major character in the books and talk about what I have learnt after reading.

At the end, I will share my overall response to the book and my recommendation. Percy Jackson, the main character, is 12 years old. He is a kid who lives with his single mother and is unsure of his dad’s identity. He has ADHD. He has a rep for getting in trouble. With help from his best friend Grover and his favourite teacher Mr.

Brunner, he finds out that there is a perfectly good explanation for all of it, that he’s not a bad kid, and that he comes by everything quite naturally. He is actually a half-blood of a demigod. His father is Posiedon, God of the Seas, and Percy has some control over water.

After a creepy math teacher transforms into a monster and tries to eat him, Percy’s friend Grover takes him to Camp Half-Blood. Soon after, he must go on a quest with Grover and Annabeth, daughter of Athena, to take back Zeus’s stolen lightning bolt and prevent a catastrophic war between the gods.

On the basis of this short description, you can see that there are a lot of superficial similarities to the Potter books. “The Lightning Thief” is all a little Harry Potter in concept – an orphan, with supernatural powers, who has two friends (one brainy girl and one geeky sidekick), several envious rival students.

He goes to a special school and he is highly skilled at the school’s favorite sport, chariot racing. He is personally charged with a quest that, should he fail, will result in the ruin of the world. The author, Rick Riordan, spends the first half of the book exploring the nature of Camp Half-blood and the various demi-god kids, as well as dropping hints about Percy’s parentage. Although, given the number of times he makes water misbehave, you would think someone would have guessed. Fortunately the plot picks up about halfway through, when the whole matter of the bolt and thieving gods comes into play.

I think the author has done a great job. Rick Riordan almost seems to be teasing the audience with these similarities to Harry Potter. But he’s having fun with it, and his style and humor are refreshing, humorous, and quite different from Rowling’s. He gets to the point much faster. The action starts on page 1 and never stops! Riordan has a snappy fast-moving style, and he peppers the story with plenty of plot twists and monstrous action. And he has quite a sharp-edged sense of humor. The snarkiness is a bit annoying in the first chapter, but after that, he has produced some fun dialogue.

Also, he does a good job with the concept of gods and monster surviving over the center of the western world, as well as spooking some fun at the gods’ behavior. For example, Dionysius whining “Father loves to punish me. The first time, Prohibition. Ghastly! ” Besides, I found Percy rather annoying in the first couple chapters, but Riordan slowly evolves him from a rather bratty, rebellious kid to a reluctant hero. Annabeth is an excellent counterpart to Percy, smart and measured if rather haughty in attitude, while Grover is a likable little sidekick who is chewing his nails over the possibility of losing his job.

And the supporting cast of gods and demigods is pretty well-drawn, especially the paternal Chiron and embittered Luke. After reading this book, I appreciate to Percy’s courage. Although he is only twelve, he is powerful and strong. Percy Jackson has to protect himself and also his friends from the many monsters that dared to attack him. He tries his best to prevent a war between the gods and take back Zeus’s stolen lightning bolt. It reminds me that we always suppose that we are too young to make some great accomplishments, but, actually, we can do it if we believe we can!

Even though the book doesn’t express its message obviously, through reading the story, I learn that we have to know about our weakness and strength. Also, we can’t finish something if there are only you. Just like the book, Percy defeats all the Greek monsters and prevents the war successfully with the help and support from his friends, Grover and Annabeth. We need our friend’s pleased help to overcome difficulties. All in all, I was amazed at how much I enjoyed this book. The book is full of magic, and mystery, and adventure.

At first, I only began to read the stories because I had watched this book’s movie version at the cinema. The movie is marvelous. And to me, a book must be worth-seeing as it has to be good enough to put into a film. As I went farther along in the book, it became more exciting. I was constantly desired to read this book more and I found it hard to put down. It has so much going on. You could revolve your entire curriculum around for quite some time. I would immerse myself in completely.

In fact, I was in tears at the end of the book not because the ending was depressing which went deep into my heart. It leaves the door open for more adventures from Percy Jackson. Anyway, I like this book as it has a little bit of everything: danger, heroes, villains, action, mystery, and adventure. It’s funny sometimes, and scary sometimes, and powerful sometimes, and even sad sometimes, but it’s a story that will keep you turning the pages as fast as your eyes can read the words. It is a whole new and fun way of looking at the Greek myths. I highly recommend this book to all of you! 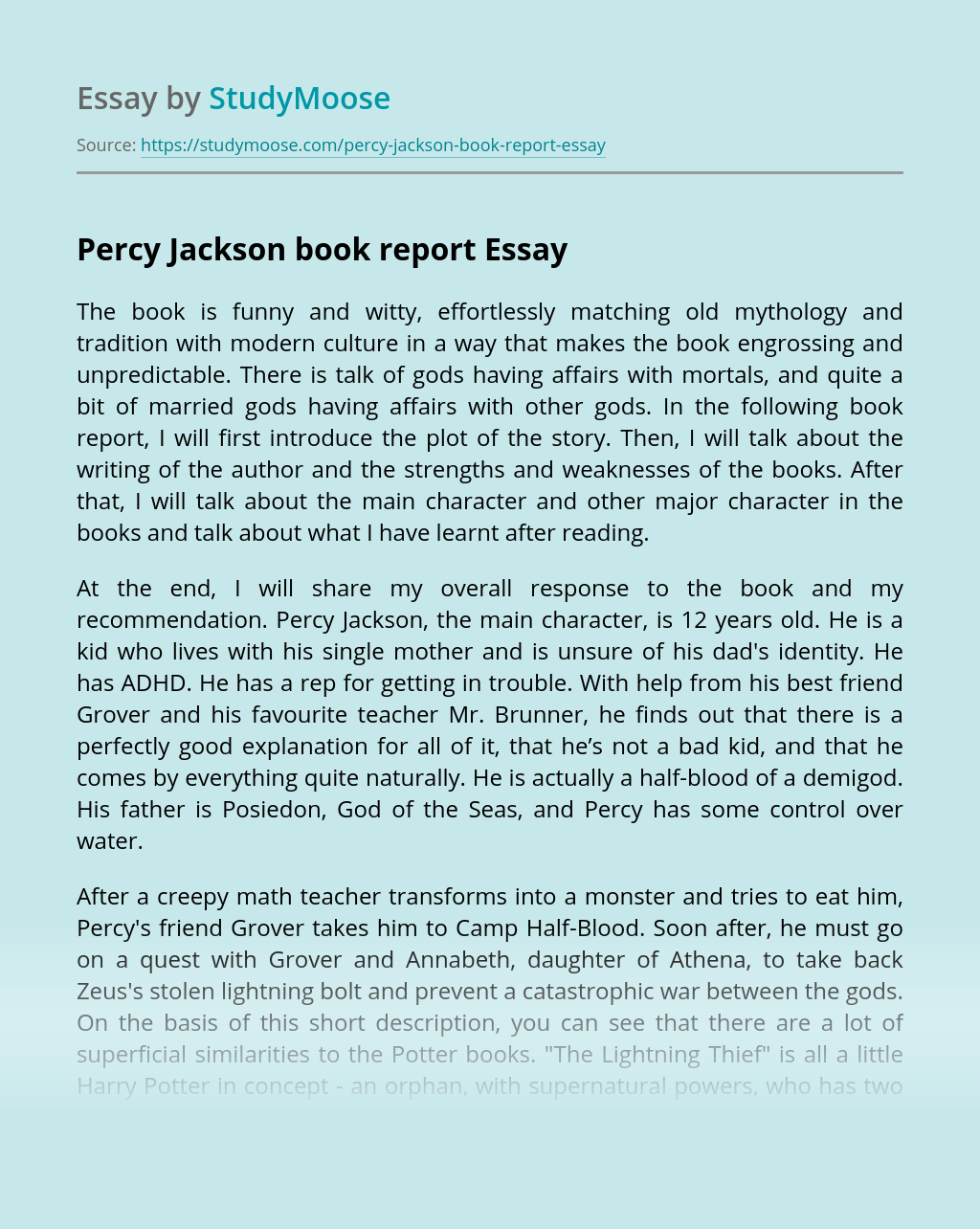