"London" by William Blake and "Ozymandias" by Percy Bysshe Shelley

In the poems, London’ and Ozymandias’, the poets successfully portray power using references to religion, wealth and position. The title of the poem ‘Ozymandias’ is a biblical reference and translates to king of kings’. It shows that the king the poem is about has a sense of arrogant pride and a belief in the immortality of his power. This could link to the downfall of the king and suggests that it was a punishment from God. Both poets use religious references mockingly, to show their distain for the belief in established religion.

Don't use plagiarized sources. Get your custom essay on
“ “London” by William Blake and “Ozymandias” by Percy Bysshe Shelley ”
Get custom paper
NEW! smart matching with writer

В Similarly, in London’ Blake portrays power by presenting the church as all powerful and yet in the line ‘Every black’ning church appals’ he shows that the church neglects the innocent orphan children who were used as chimneysweeps. The use of ‘every’ shows that no church is exempt from Blakes criticism as they are all deeply involved in the problems of society. In Blakes life, he was very open about his opposition to the church and the part it failed to play for the bettering of society.

This links to the constant criticism of the church throughout London’. The use of the adjective ‘black’ning’ deepens the extent to which Blake believes religion causes divisions in society.

Both poems successfully show in the poems. In London, William Blake is walking down the street and commenting on what he sees. In the third stanza, the poet uses the alliteration ‘chimney-sweepers cry’, which show the abuse of power from the rich who are driving young children into dangerous work.

The use of the noun ‘cry’ highlights the children’s innocence and inexperience and provides an emotive image of child labour. This presents power as it shows that the wealthy people have so much control over the poorer people and put them into dangerous work because they can afford it. Contrastingly in Ozymandias, by Percy Shelley, he shows power with the use of a sonnet. ‘trunkless legs of stone stand in the desert’. The quote shows the effect of time on human power and by explaining that half the statue is gone, how easily it can take it away. The use of the noun ‘stone’ shows that the power was long standing, but like all power it eventually fades. By describing the desert as ‘boundless and bare’, Shelley shows that although the leader was significant at the time, it became very insignificant as the time went on. This shows power as it links to the reign of one of the greatest Egyptian pharaohs, Ramses II. The irony of ‘shattered visage’ also links to the damaging effects of time.

Another way that both poets show power throughout is through the continuous use of negative language. In Ozymandias, Shelley says ‘sneer of cold command’. The king was able to deliver his orders without relying on the good will people felt for him. Using the noun sneer, the poet shows that the sculptor understood the arrogance of the leader and wanted it permanently displayed. Using the adjective, cold, Shelley shows that the leader didn’t do what was best for their country, they did whatever they thought was best for themselves. In London, Blake also uses negative language to portray power. ‘runs in blood down palace walls’, this metaphor shows that the ordinary people of London continue to suffer the consequences of the poor living standards, whereas the people living inside the palace live safely and don’t suffer the consequences. This shows power as the people who are in the upper class don’t have to suffer the consequences of their actions. В The ‘marriage hearse’ suggests that the people in power affect everything happy and that because of them nothing good remains. The negative connotation of the word hearse supports this as it depicts that all good things are dead. 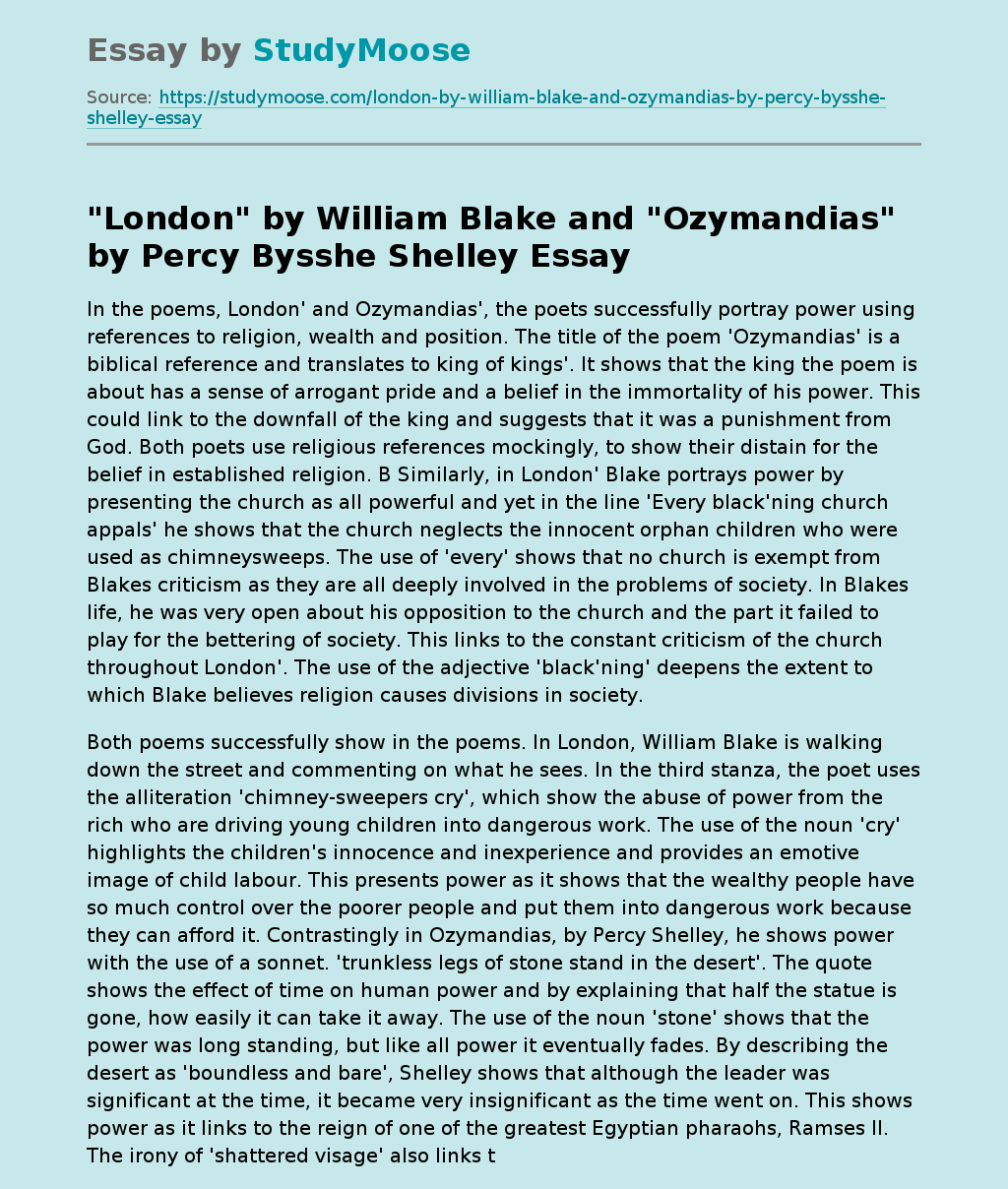