Question- Identify a poem that makes a social or political statement. Explain what statement is being made and, with close references to the text, analyse the literary conventions used to convey the statements. Further, explain how this helps you gain a stronger understanding of the poem`s main theme(s). I have chosen the poem London by William Blake; I will explain how Blake is making a social and political statement by addressing the inequality and oppression within the city of London in the late 18th century.

Turn in your highest-quality paper
Get a qualified writer to help you with
“ London by William Blake ”
Get high-quality paper
NEW! AI matching with writer

I will also examine how the poet manages to convey his opinion through poetic techniques. The poem is set in the City of London during the Industrial revolution, when there was a population explosion in the cities of the UK due to the movement of people from rural areas to urban areas in search of work. The sudden urbanisation in cities such as London put pressure on the standards of living and caused extreme poverty, people lived in horrific conditions.

Due to the poor sanitation, there was a rapid spread of diseases such as cholera.

William points to the corruption within the city of London; this poem is a form of social and political protest against the oppressive landlords and authorities of the city. In the first stanza William Blake talks of wandering through the streets that are privately owned, and states even the river Thames is not free from ownership. He is making a social/political comment about the ruling class and how everything that should be free to every citizen in London but has actually been stolen by the ruling class.

His sense of inequality and oppression is clear from the very beginning. The repetition of the word “chartered” emphasises the bureaucracy that William felt was controlling the people of London. He also uses repetition with the word “mark” when he comments on the effects of this control and oppression has on the ordinary working class people. He states that in every face he sees there is a look of helplessness, and hopelessness for the future, all the people in despair. In the second verse, the poet continues to emphasise the oppression of the people.

He uses repetition by emphasizing the word every, he is talking about every member of the population being enslaved by the ruling class and all are sorrowful this creates a feeling of depression on the streets of London. He talks about how minds are being controlled by using a metaphor to great effect: “The mind-forg’d manacles I hear. ” The image being conveyed is that of a mind being manacled, unable to have hope for the future, and the suppression of thought, suggesting an imprisonment of the mind.

Perhaps he felt that people were being socialized into accepting their fate, the authorities would want to supress any sense of rebellion In the third verse Blake make reference to the plight and exploitation of child workers, in this case Chimney sweeps. Child labour was cheap, but families relied on their meagre wages to survive. The children had to work long hours, in very harsh and dangerous environments.

William Blake is appalled about how church and the palace sits back and does nothing to ease the plight of the destitute. Every black’ning Church appals; and the hapless Soldier’s sigh Runs in blood down Palace walls” The reference to soldier`s sigh represents men having to serve their country for a cause they do not agree with but feel they have no choice. Blake is appointing blame to these institutions that are supposedly meant to care and offer hope to people, yet there is no help forthcoming. His imagery creates a picture of a deep mourning within society. In the final stanza, he draws attention to the plight of the young prostitute on the dark night streets.

When in a time of harsh economic trouble; young women may have had no choice but to turn to prostitution. Blake is drawing attention to the young women who are also victims of exploitation. “Blasts the new-born Infant’s tear and blights with plagues the Marriage hearse. ” These women not only neglect their offspring but insult, damage, denigrate their children – we might think this is because of how these babies are got, or the circumstances of life – but the poet makes no mention or understanding, noting again, only the negative appearance, in a most unpleasant, off putting, unsympathetic way.

Marriage is a “hearse” as opposed to a joyful partnership, marriages are killed or destroy those within it – and this is linked to the presence of young prostitutes who are either victims of, or the cause of – we cannot know further, because the poet walks on, breaking off communication with us and leaving us with only this singularly dark impression. One clue is the use of the word “plague”.

The prevalence of what we would refer to as STD’s – a real plague in Victorian London, where the availability of prostitutes, lack of birth control and social attitudes meant that uncounted numbers of men brought an invisible virus home to the marriage bed. This must have had a debilitating, frightening impact on many of the population. The resultant levels of sickness among middle class – and no doubt other – women terribly deformed and blinded children, and all because of a topic that would affect almost every family but which was not discussed.

William`s political views are clear throughout, his distrust of authority, and his hatred of the enslavement of society. He projects this through his dark imagery. His language throughout is morose and this sets the scene of a society ridden with poverty, working class people constantly being trod on by the ruling class. His social protest leaves the reader in do doubt that William detests the inequality and oppression that he sees all around him and also helps the reader to understand how hard it was to live during the industrial revolution unless you were a member of the ruling class. 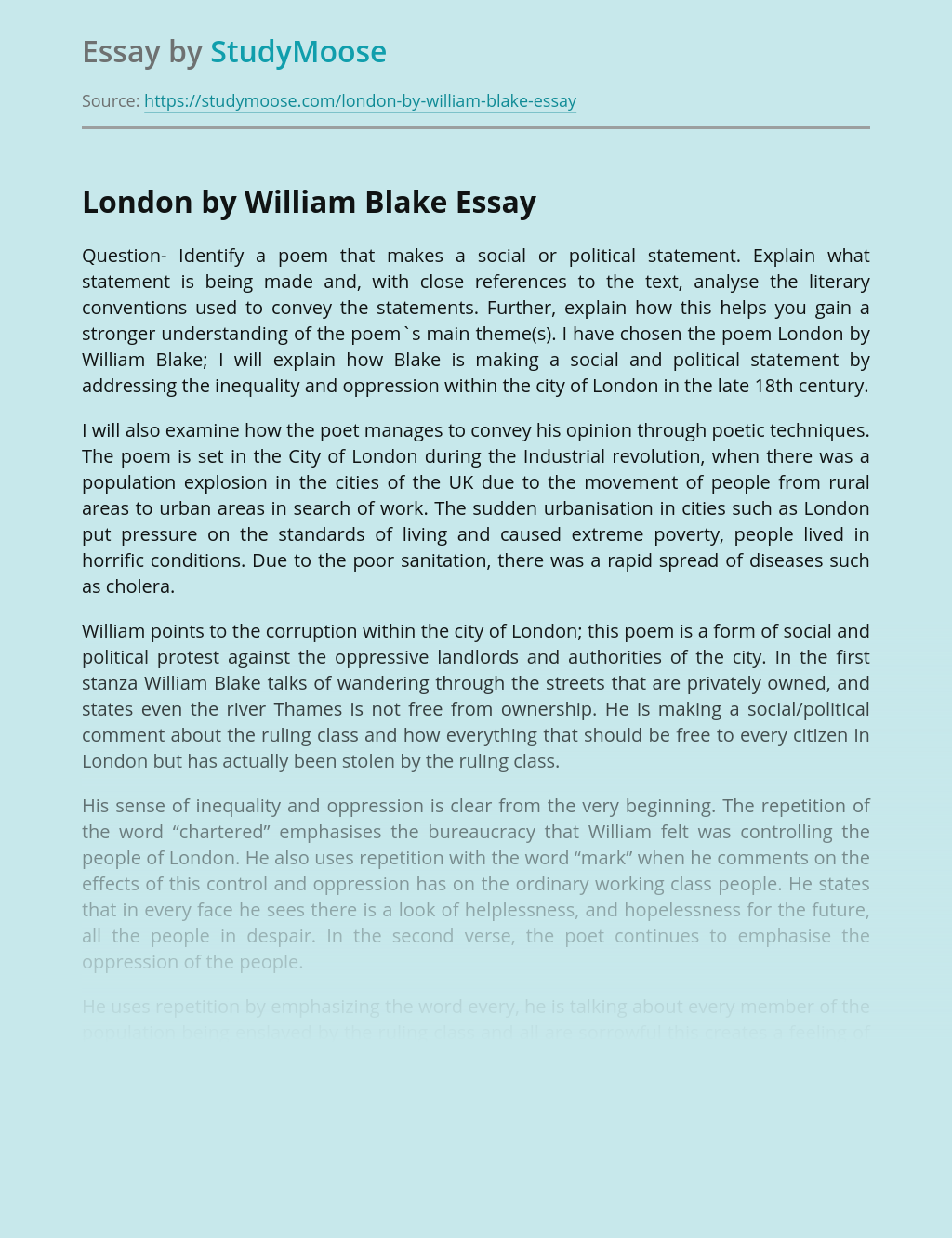 Turn in your highest-quality paper
Get a qualified writer to help you with
“ London by William Blake ”
Get high-quality paper
Helping students since 2015
Stay Safe, Stay Original