Compare and contrast “London” by William Blake with “Composed upon Westminster Bridge” by William Wordsworth and show how each used his poetry to express his views about his life and times.

Don't use plagiarized sources. Get your custom essay on
“ “London” by William Blake with “Composed upon Westminster Bridge” by William Wordsworth ”
Get custom paper
NEW! smart matching with writer

As the poems were alive in the same era of life they were both alive during the industrial revolution. This was a time when children of a very age were sent up chimneys and were made to sweep them clean.

They were used because of their very small size. This turned Wordsworth and indeed Blake against London. They also didn’t like other major cities in the country like Manchester, Birmingham and Liverpool. The main reason why they hated major cities, with London being the largest one was because they hated pollution.

They both preferred the countryside and nature to the hustle and the bustle of England’s city environment. Both poets didn’t really like what they saw around them. They were also both romantic poets.

He makes out that London looks as beautiful as the countryside without anyone awake and the major; air-polluting factories are empty and quiet.

A main reason, which turned both of the poets against London, was because of the factories and tall buildings, which were caused by industrialisation. They felt that it ruined the natural beauty that the country has. There is also use of different parts of speech, in particular personification.

Also in the poem, which is a sonnet, Wordsworth tries to get the point

across to the readers that anyone who doesn’t see the beauty of London at this time in the day would have to be a very insensitive and not appreciate anything that was naturally beautiful in the world.

“Earth has not anything to show more fair: Dull would he be of soul who could pass by, a sight so touching in its majesty”.

Wordsworth, who was poet laureate, along with William Blake both believed in Pantheism. This meant that they both saw god in nature.

In the poem “London”, by William Blake, the poet is expressing his real

thoughts about London as a whole. That it wasn’t really a nice place to be. Like William Wordsworth he didn’t like London due to the fact that it had become so polluted due to industrialisation.

The poem itself, contain four verses, each containing four lines in each

verse. The poem is also written in doggerel style, because it is written

in a crude and inartistic style.

In the poem, Blake is expressing the bad details of London. His thoughts are dark and moody. He compares London to that of a battle site.

“And the hapless soldier’s sigh. Runs in blood down palace walls.”

This for me sums up the exact thought of the poet, William Blake about London in general. When Blake was writing this poem, it was mid-night in London. The time of night is important in the poem as it reflects the dark and sombre mood of Blake.

Right from the offset in the poem there is criticism of London, as Blake describes how the river has nowhere to go.

“As I wander each chartered street, near where the chartered Thames does flow.”

It is like the river is mapped out and has to flow exactly where it is shown on the map. This is because London has lost its natural beauty and is now so unnatural. The people who live in London are always having something to moan about, according to the Poet. This is because they are all so trapped in the City, many want to get out of London because it has become so industrialised and they want it so everything is naturally beautiful.

“And mark in every face I meet, Marks of weakness, marks of woe.”

Blake also feels trapped in London with nowhere to turn but to more factories.

“In every cry of every man. In every infants cry of fear, in every voice, in every ban, the mind forged manacles I hear.”

Blake uses different parts of speech throughout the poem.

“And blights with plagues the marriage hearse.”

An oxymoron is used here because people don’t usually associate marriage with a hearse.

The poets William Blake and William Wordsworth both express their own views towards London in their poetry, Blake with the dull view of London and Wordsworth with his unusual praise for London. Many different parts of speech are exercised in each poem for different reasons. But the poets give us their personal view towards London, each in a descriptive way.

"London" by William Blake with "Composed upon Westminster Bridge" by William Wordsworth. (2017, Oct 16). Retrieved from https://studymoose.com/london-by-william-blake-with-composed-upon-westminster-bridge-by-william-wordsworth-essay 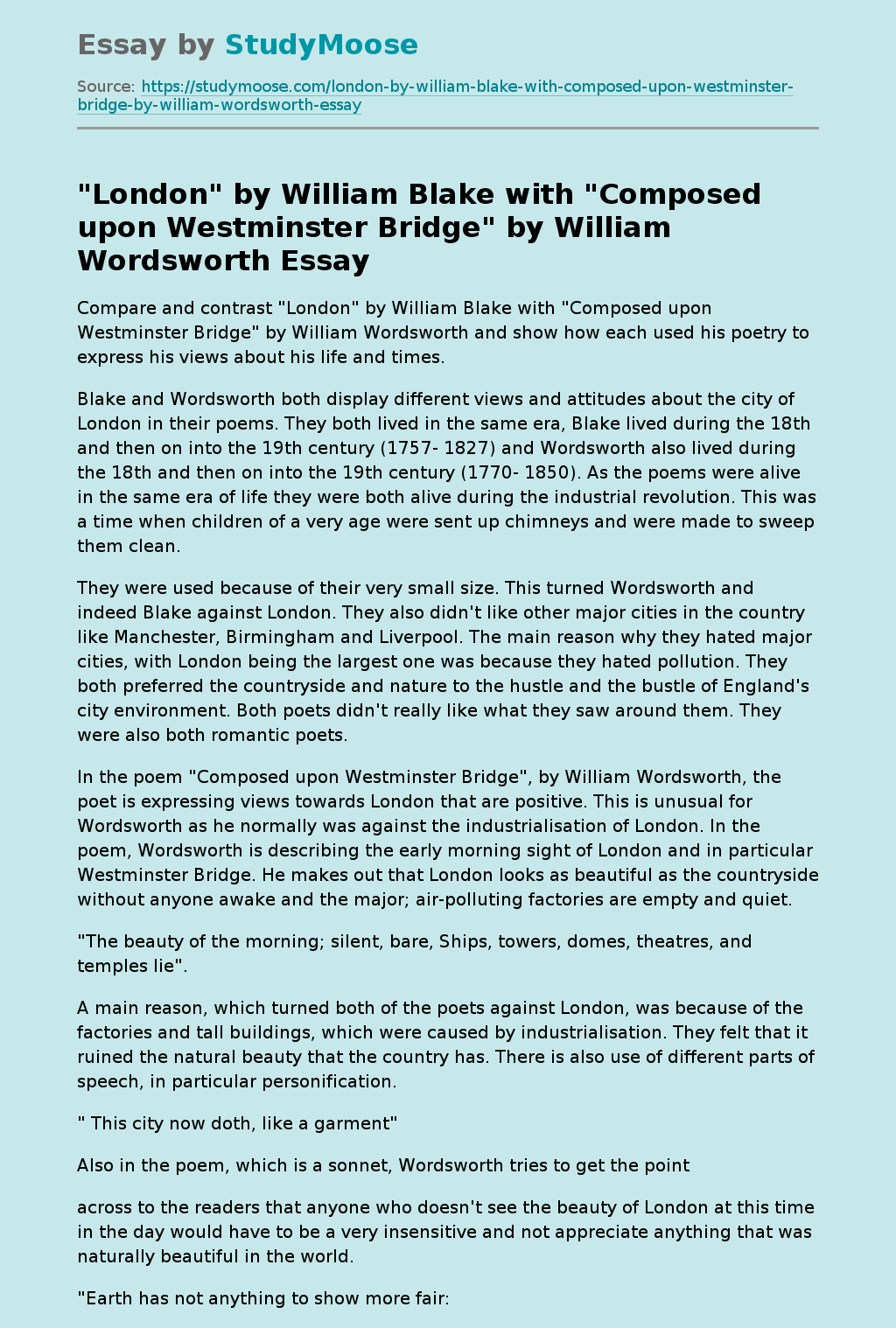