The Fall of Ozymandias

Humanity may be considered the most powerful force on the planet, leaving lasting legacies and accomplishing major milestones throughout history. However, as time slips by, everything seems to somehow slowly disappear into the background as white noise, as current events mute memories of the forgotten past, revealing humanity’s greatest threat: time. In Percy Shelley’s poem “Ozymandias”, the reader observes the fallen remains of the stone statue of King Ozymandias, which displays how detrimental time can be against mankind. Through the clever use of rhetorical devices and strategic poetic structure, Shelley illustrates the central image of the stone statue of Ozymandias that encapsulates the theme as an extended metaphor, representing how power of time will continue to always prevail, no matter ambitious one may be.

Don't use plagiarized sources. Get your custom essay on
“ The Fall of Ozymandias ”
Get custom paper
NEW! smart matching with writer

With expressive diction, Shelley creates vivid imagery to demonstrate the power that time has against humanity, and through the aid of nature, the destructive effects of time can be seen from the stone remains of King Ozymandias.

The poem opens with the narrator listening to a traveler, who describes the statue from afar as “two vast and trunkless legs of stones” standing alone in the desert. From seeing how the immense statue lacked structure and towered only above endless stretches of sand, Shelley evokes a sense of isolation and emptiness from the unfortunate stone remains of King Ozymandias. Then, the traveler continues recounting the statue’s expression in closer detail, stating that it wore a “wrinkled lip and sneer of cold command” , personifying the features of the statue.

By attributing human characteristics to the inanimate stone, Shelley brings life to the broken statue that displayed the once glorious king Ozymandias, drawing emotion from the statue’s carved expressions that radiated confidence and boldness. Here, the imagery created in these statements evokes how passionate the king was as he strived to dominate and conquer, allowing the reader to clearly imagine what Ozymandias was like at his prime. Shelley uses the visual of the statue created in the reader’s mind as a central image in order to build a strong foundation in preparation for an extended metaphor, turning King Ozymandias into a symbol of power and legacy in humanity’s battle against time. In addition, Shelley also describes the statue of Ozymandias as a “colossal Wreck” , which alludes to a statue named “The colossus of Ramses II”.

The Pharaoh of Egypt Ramses II, whose fallen statue inspired Shelley’s Ozymandias, was well known for building more monumental constructions–one being his funerary temple, known as the Ramesseum, where this statue lies–than any other pharaoh during his long-lasting reign. This allusion allows the reader to compare King Ozymandias with its real-life counterpart King Ramses II and mirror the real king’s grandness from his accomplishments to emphasize King Ozymandias’ impression on the reader. Hence, by switching the perspective from the king’s bold expressions to the overall image of the statue’s remain, however, Shelley snaps the reader back into reality when revealing that king’s lasting impression in history now only remains as “a shattered visage” . This affects the reader’s view of the Ozymandias’ commanding features, which now proves as only a facade that conceals its forlorn and bitter reality. Despite how passionate and determined Ozymandias seemed in making a lasting mark on the world, his efforts have all sunken into the sands of the desert surrounding him, leaving nothing behind, and this shows how human achievements and works are ultimately lost to time. Thus, Shelley’s ambivalent word choice illustrates the central image of Ozymandias’ statue, and the subtle use of allusion makes the turn back to reality even harsher as the reader realizes that achievements, even ones create by real kings, will one day fade into obscurity and no longer have a lasting impression.

Yet, while the statue of Ozymandias remains in the sand, standing as a last memory of the his endeavors and strong will, time will continue forward, and as more time passes by, the more people will forget about the king’s legacy. In addition to using conflicting words that created an unstable and varying tone, Shelley maintains a sense of the time progression by forming a unique tempo from merging rhyming schemes and sonnet structures. The overall rhyming structure of the poem is  taking on the structure of a Petrarchan sonnet, which is formed by an octet and a sestet, and a variation of the Shakespearean rhyming scheme, which starts with alternating rhyme sets and ends with a couplet. First off, Shelley uses the sonnet structure to tie in the element of surprise in order to connect back to the theme of extended metaphor of the poem. In the first six lines of octet portion, the traveler speaks of the statue’s disintegrating state and features in great detail, slowly creating a strong, solid impression of Ozymandias.

When the rhyming scheme begins to shift the next four lines, being the bridge between the octet and sestet portion, the traveler focuses on the words written on the statue’s pedestal “My name is Ozymandias, Look on my Works, ye Mighty, and despair!”  and immediately afterwards, the reader’s attention zooms outwards and gazes at the statue’s empty surroundings, being nothing but “lone and level sands that stretch far away” . While the octet constructed the image and context behind Ozymandias, the sharp transition to the content in the sestet, compared the king’s bold words with the harsh reality that surrounded him, ultimately destroys the valiant impression of the king the reader had built up. As the reader is caught off guard, shift in tone creates a sudden sense of irony as it highlights and emphasizes the stark contrast between the king’s bold, demanding words on this pedestal and his barren surroundings. To support the content’s structure, Shelley uses a custom rhyming scheme in order to create a sense of time progressing with a varying mood.

The poem starts with alternate rhyme , matching “land” with “sand” and “stone” with “frown” . This sets a smooth cadence for the reader to follow, allowing Shelly to create a setting and build upon the image of Ozymandias. After new alternate rhyme set (CD), however, the rhyming scheme then changes into an irregular pattern (CEDE) before transitioning into the last two sets (EFEF). Since the poem is mainly composed of alternating rhyme sets, Shelley maintains a slow and calm mood, emphasizing how barren and desolate Ozymandias’ surroundings are. The disturbance in rhyme, however, allows Ozymandias’ words to shine for moment, peaking in his confidence and passion. Allowing the reader to experience the grandness of the statue at its height accentuates the irony in the sudden change in tone between the king’s words and his deserted surroundings. Hence, with clever timing and construction, Shelley portrays that, despite how great one’s efforts or legacy may be, we do not have control over the how we are remembered or the future of humanity, as only time can continue onwards and determine what lies ahead.

Altogether, through the clever, timely use of rhetorical devices and rhyming structure, Shelley portrays mankind’s battle against time through the statue of Ozymandias. Though, considering the analysis of the poem may seem gloomy and bleak, a positive message can be drawn from the harsh realization of the cruel reality. While the ordinary person may not be conquering lands and building an empire, we must acknowledge that everything runs temporarily in relation to time, making our time limited. Towards the end of our lives, we may begin become filled with regrets for everything one did not do or could only wish to ever do, Therefore, however, instead of allowing time to consume every second of our lives, we should learn to take advantage of it. Though Ozymandias now remains as a fallen statue in desert, the fact that the traveler could clearly recall and see his burning ambition and confidence from his chiseled stone face shows that Ozymandias had once lived, even if it did not last to the end, as an ambitious man, fitting for the title of “King of Kings”.

The Fall of Ozymandias. (2021, Apr 22). Retrieved from https://studymoose.com/the-fall-of-ozymandias-essay 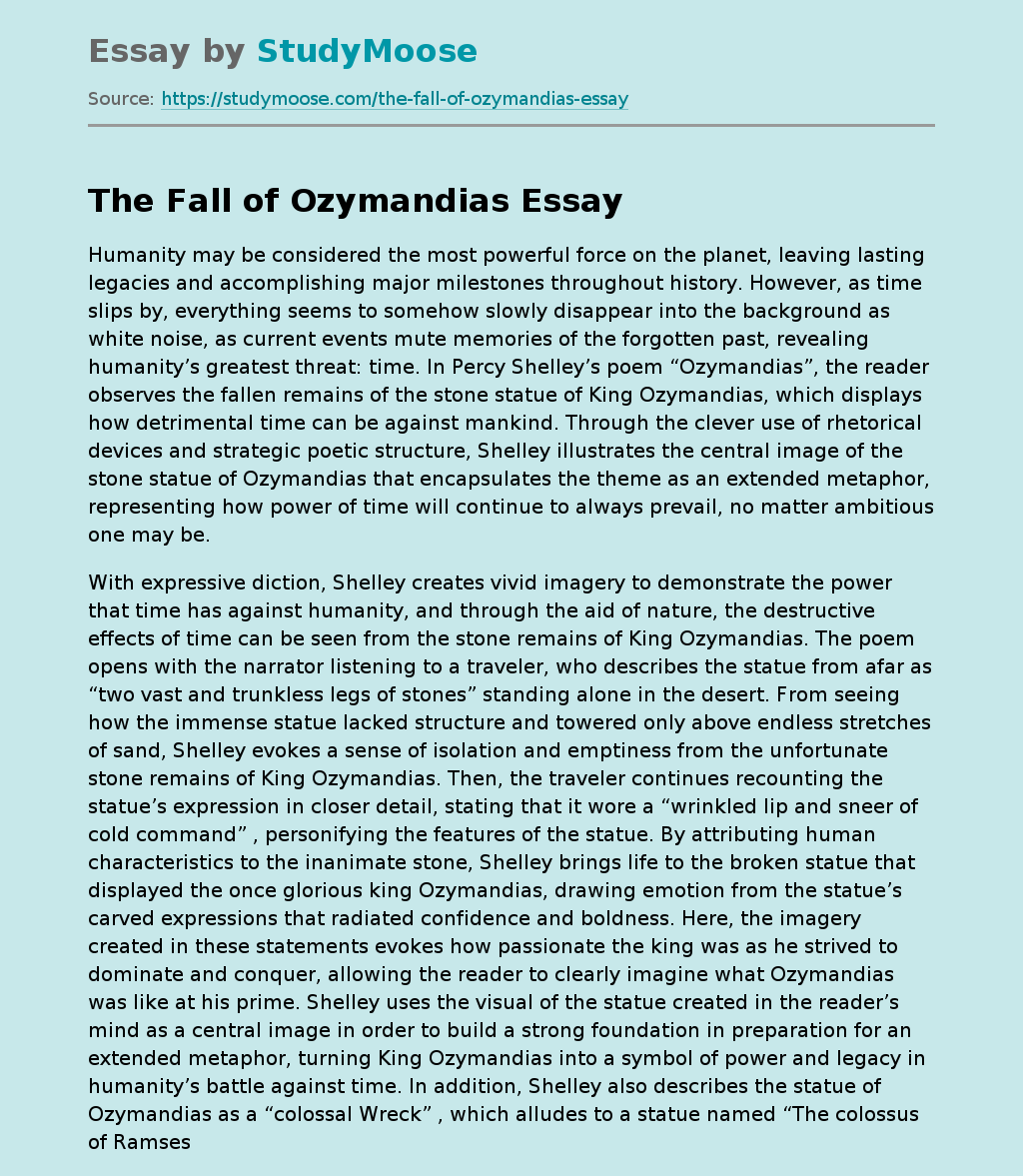