Because the number of food produced is not enough to feed the whole region where the population keeps on growing, then food shortage has taken place.

Don't use plagiarized sources. Get your custom essay on
“ Overpopulation and Possible Solution ”
Get custom paper
NEW! smart matching with writer

When people do not consume enough food, their health will be affected. It is also observed that the number of starvation in the population increases. “Number of starvation: 923 million in 2007 versus 832 million in 1995 and more recent FAO estimates point to an even more dramatic increase, to 1. 02 billion in 2009. ” (www. wikipedia. org, 2012). Inadequate clean water for drinking also leads to poor health as diseases such as diarrhea, typhoid and cholera might be caught.

It gets worse when this food and water shortage issue is coupled with poor economic situation. They won’t be able to afford to feed themselves, not to mention the ones having more than 2 children. The possible solution that could be done is firstly a birth control of not having more than 2 children. This could reduce the amount of food and water used to feed an extra child and save more money for other necessities.

Other solution is desalination in order to obtain clean water, this may be used for a more developed and industrialized regions. Many have also practice desalination, like Saudi Arabia, Malta, Singapore and United States.

The second problem from overpopulation is the education of the population. When the number of schools that are limited cannot support with the increasing number of students trying to enroll, it is called overcrowding of schools. Statistics report “the fastest public school growth occurred in the elementary grades, where enrollment rose 24 percent over this period, from 27 million to 33. 5 million. ” (www. npg. org, 2013). Another issue is that when one’s family is economically poor, they have to spend all their money on food, and they automatically cannot afford to send their children to school.

What they have forgotten is that education plays an important role in our everyday lives; it is knowledge gain, and an essential component of life. Education can lead to a bright future for example getting high-paid-salary jobs. When children did not get an education, especially girls, they tend to have a marriage life early, and have even more children. A possible solution that could be done involves the government to build more schools with qualified teachers especially in rural areas with free tuition fees. This way, more children may go to school to obtain education, even if they are economically poor.

The third problem that is an effect of overpopulation is unemployment. Unemployment occurs when the numbers of jobs are the same while the number of population that wants a job is increasing. Unemployment might lead to low self-confidence, unsocial, stress and family breakdown. The unemployed who owns a family won’t be able to feed his/her family and afford other necessities. When one has no job, that could also lead to crime such as stealing, dealing with drugs or other illegal things. US Labor Department shows that “41% of America unemployed, 1 in 3 don’t want work at all. (www. rt. com, 2012).

This shows that unemployment rate is still high and people are losing faith, as they are not encouraged to find a job and doesn’t want to work at all. A possible solution that can be done once again involve the government, to supply more jobs so that the unemployed can be employed. Another solution is for reducing the amount of increasing population itself, by charging of taxes on the 2nd children one family has. This law will involve the government as well. The fourth effect is global environment problems like scarcity of natural resources.

As population keeps on increasing, natural resources get used up quicker before they can be substituted. More population does overfishing, opens factories and opens mines that pollute the water with solid wastes and toxic substances and this creates water pollution. Increase in population increases the demand for food production. Farmers start to cultivate dry and poor in nutrients that are inappropriate areas for farming. Exploiting lands can lead nothing but erosion and nutrients loss. This creates soil degradation.

Destruction of natural habitat of wildlife species such as deforestation may also lead to loss of biodiversity. Statistics said “The constant clearing of the Amazon forest has had devastating effect on many rare tropical species. It has been estimated that 10% of the species in the region have become extinct. ” (www. fubini. swarthmore. edu, 2012). A possible solution is to preserve the existing natural resources. Our government could use laws such as no cutting down trees, closing down factories that pollute the water excessively and protect our endangered animal and plants species.

Education, health, unemployment and global environment problems are the effects of overpopulation. But, we could begin to diminish those problems by involving the governments to introduce laws such as charging taxes on 2nd children, opening more schools in rural areas and laws to conserve our existing natural resources. These solutions may take time to develop, but we can always start small by implementing family planning/birth controls. Together, we can always create the world a better place to live. 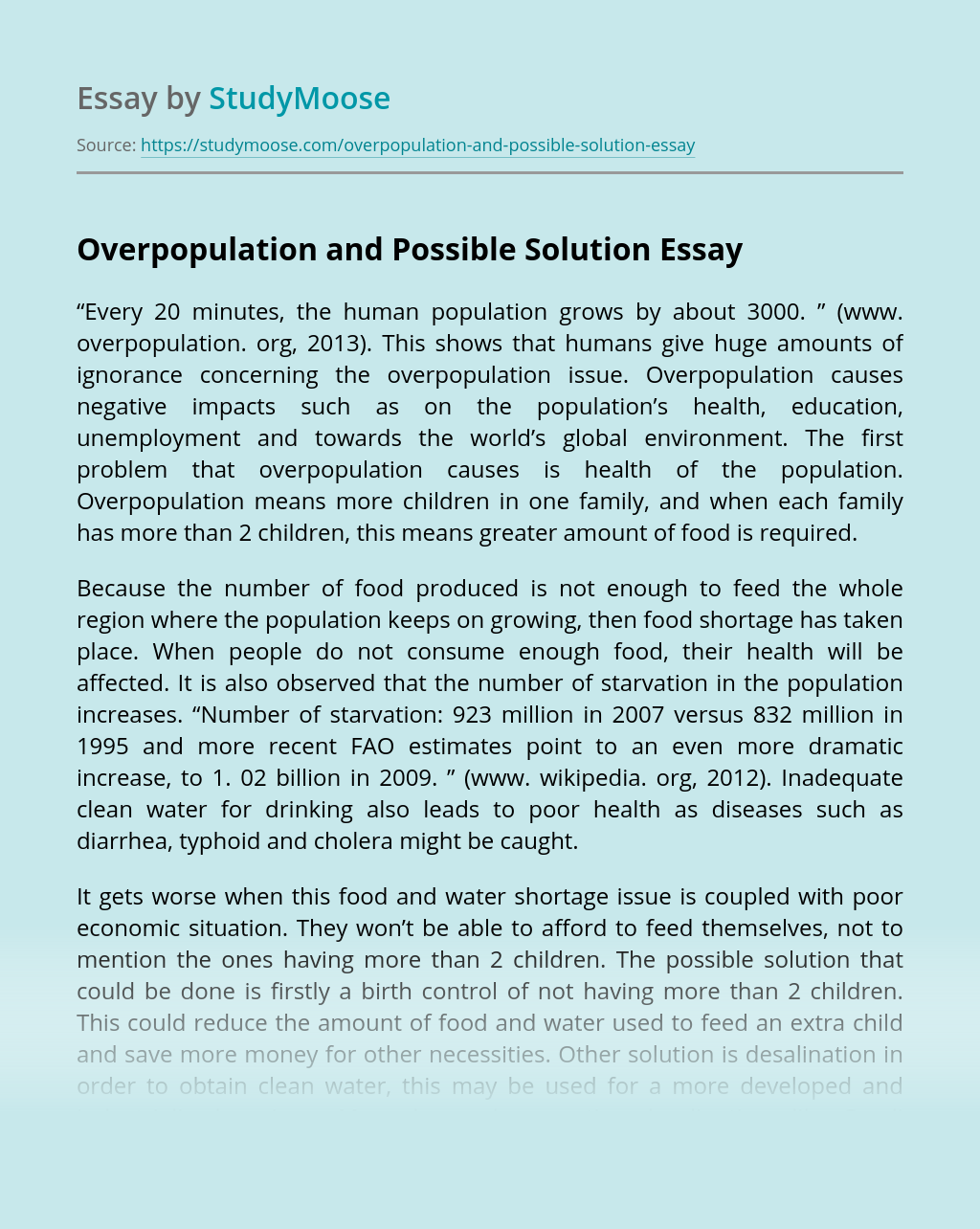